Campbell Hatton faces Sonni Martinez this weekend in his fourth professional fight. While the Manchester boxer is a novice in ring terms, unreasonable expectations have been placed upon him due to his famous surname. Campbell is the son of Ricky ‘The Hitman’ Hatton, one of Britain’s most popular former world champions. This connection has seen Campbell skip the small hall shows and fight on major cards, with his outing at the weekend coming at the Tottenham Hotspur Stadium on the Anthony Joshua vs Oleksandr Usyk undercard.

A famous father is no guarantee of boxing success, nor is it necessarily a path to disappointment. Boxing’s sons have enjoyed mixed fortunes inside the ring, here are some of the more high-profile examples. 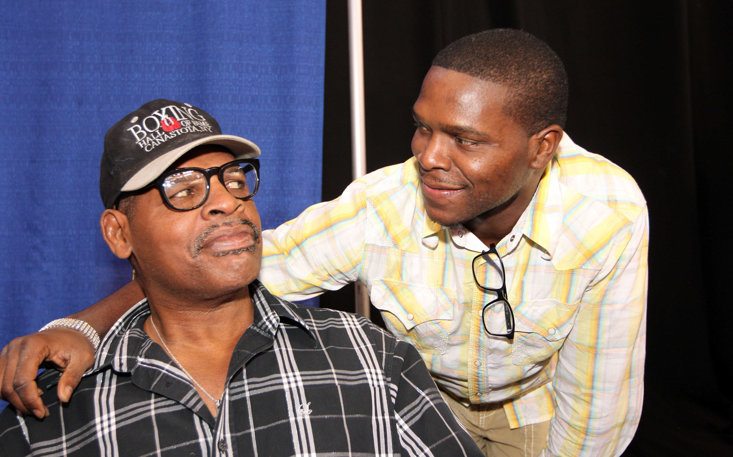 Leon Spinks shocked the world when he beat Muhammad Ali to capture the world heavyweight championship in just his ninth fight. He would drop it back to ‘The Greatest’ in a rematch, and never hit such heights again, losing further title bouts to Larry Holmes and cruiserweight king Dwight Muhammad Qawi. He retired in 1995 with a record of 26-17-3.

While not enjoying the fame his father got by defeating history’s most famous boxer, Cory Spinks actually surpassed Leon’s fight career in terms of achievement. ‘The Next Generation’ captured the undisputed welterweight championship, defeating Ricardo Mayorga in 2003. He successfully defended the crown against Zab Judah before losing to ‘Super’ in a rematch. Moving up in weight, Spinks reigned as a two-time IBF light middleweight champion, and took undisputed middleweight champion Jermain Taylor the distance in defeat.

This famous boxing family is completed by Leon’s brother Michael Spinks, who reigned as undisputed light heavyweight champion and defeated Larry Holmes for the heavyweight championship. He is unfairly most-remembered for Mike Tyson knocking him out in 91 seconds in his final fight. 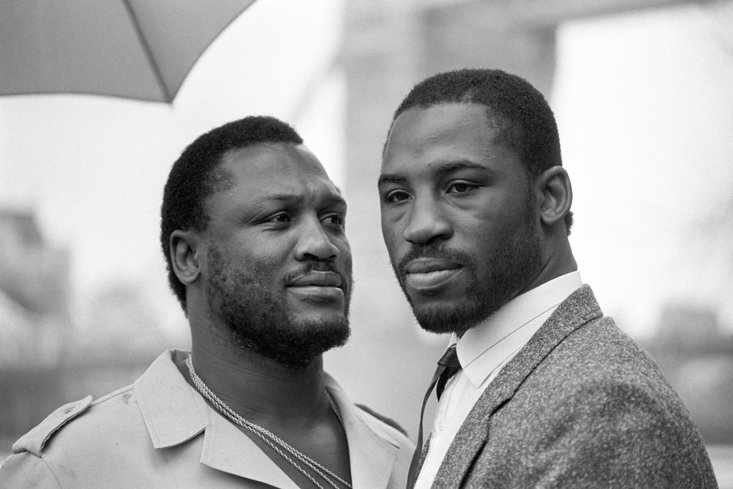 ‘Smokin’’ Joe Frazier is rightfully considered one of the greatest heavyweights to ever wear the gloves. His dominant championship reign included nine wins, seven knockouts, and a decision over Muhammad Ali in one of history’s greatest fights. The pair would run it back twice more, and while Frazier lost both rematches, the trilogy is considered one of boxing’s sacred texts.

All this gave his son Marvis a lot to live up to, and the weight of matching the legacy of an all-time great was too much to bear. In truth, the younger Frazier was a decent heavyweight by mid-80s standards. His ledger boasts solid wins over Joe Bugner, James ‘Quick’ Tillis and former world champion James ‘Bonecrusher’ Smith. However, when Marvis stepped up to elite level he was swiftly and brutally found out. Both Mike Tyson and Larry Holmes both stopped Frazier in the first round of world title fights. 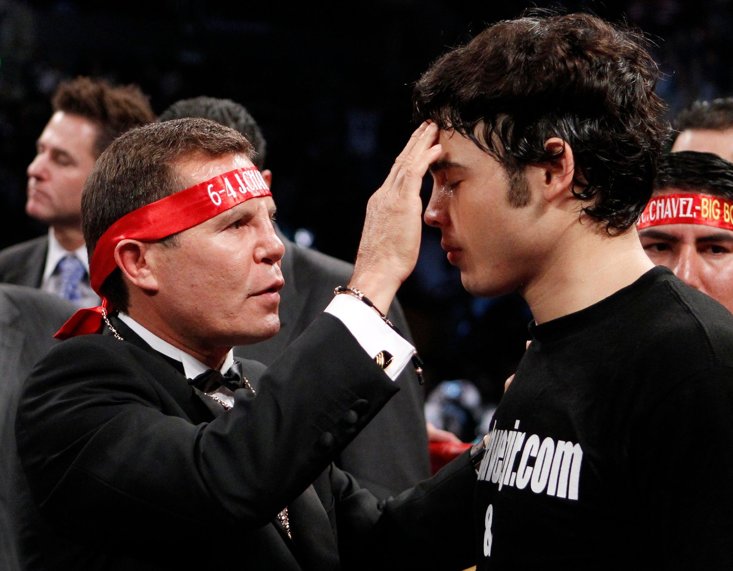 In fairness to the younger man, most people on this list have had to follow in the footsteps of great champions, Chavez Jr has had to follow a Mexican national hero. Few fighters have ever captured a nation’s hearts and minds like Julio Cesar Chavez Sr, and his son has sometimes wilted in that same spotlight.

Chavez Jr enjoyed a purple patch in the early part of the last decade, winning the WBC middleweight title, which he defended three times before losing to Sergio Martinez. He has gone 6-5 since, reaching his nadir in his last fight, a loss to aging former UFC star Anderson Silva. 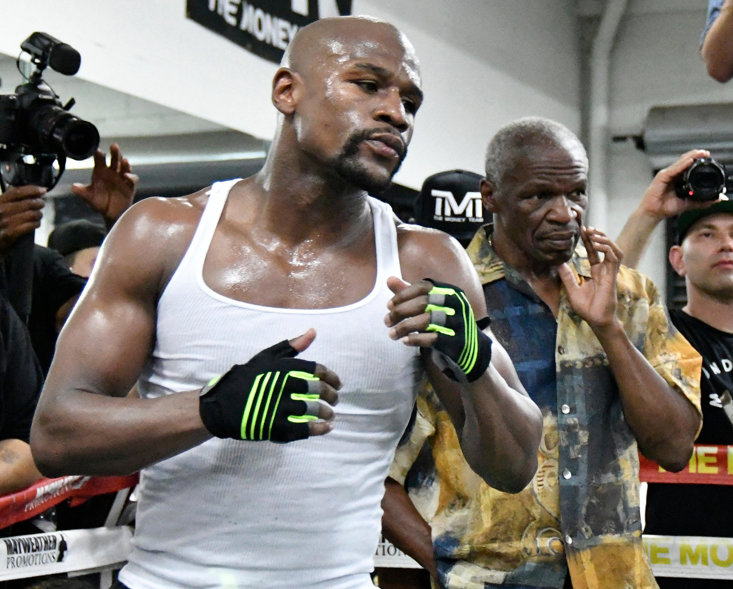 The polar opposite of a fighter being defined by his father’s career, Floyd Mayweather Sr’s ring achievements are usually only brought up in discussions about his son. The elder man enjoyed a decent career at welterweight, but fell short of world class, and his most famous fight was a loss to Sugar Ray Leonard in 1978.

His uncles (and Sr’s brothers) also boxed, Roger Mayweather being the most successful, reigning as a two-weight world champion. 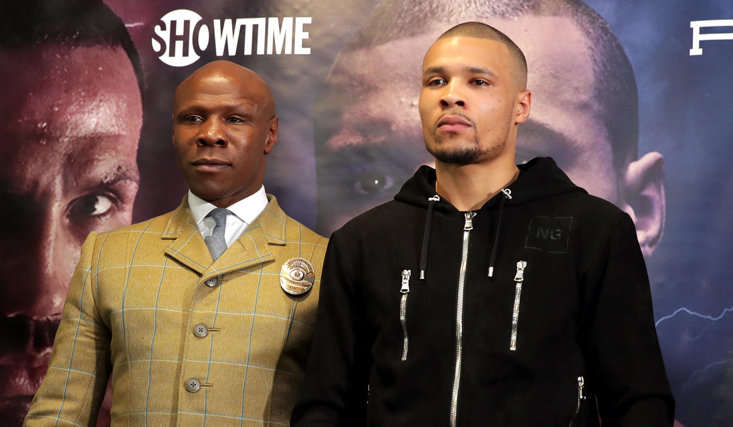 The arrogant but brilliant Eubank Sr called himself ‘Simply The Best’ for a reason, as he captured middleweight and super-middleweight titles during an era where Britain dominated those weights. A fixture of the backpages when boxing in this country was at its commercial zenith, Eubank Sr is a genuine national icon.

While his son has not traversed these heights of popularity, he remains a world-ranked contender with some impressive wins on his record. Starting his career as a cocksure mirror-image of his father, a humbling loss to Billy Joe Saunders brought the Sussex fighter back down to Earth with a bang. Since then he has mixed in excellent company, owning wins over James DeGale and Arthur Abraham. He continues to chase a world title, having lost to George Groves in a 2018 WBA championship tilt. 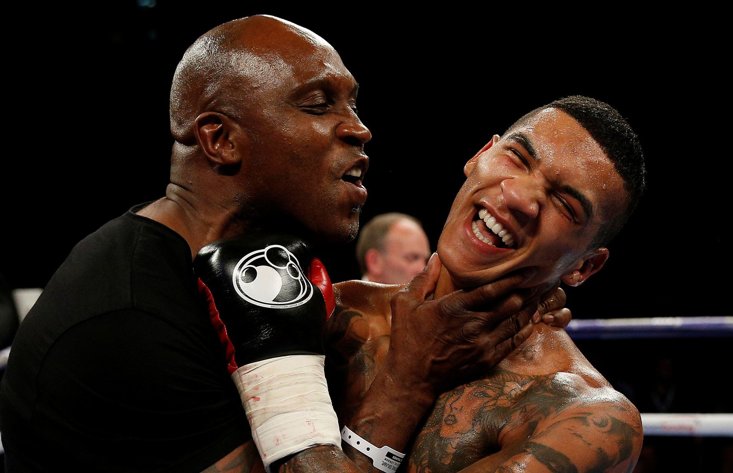 From Chris Eubank to his greatest rival, Nigel Benn. The two shared a deeply personal rivalry during the 1990s, as the UK’s two premiere middleweights took their conflict all the way to world titles. ‘The Dark Destroyer’, like his nemesis, is a former two-weight world champion and left an indelible mark on British boxing.

His son is currently unbeaten, his record standing at 19-0 with 12 knockouts. At 24, it is too early to tell whether he will be a cautionary tale or the second coming of the Benn legacy. But he can stand as proof to fighters like Campbell Hatton that it is possible to make your way in the world as the son of a famous fighter.

x
Suggested Searches:
Manchester United
Liverpool
Manchester City
Marcus Rashford
Premier League
More
boxing
Boxing Doesn’t Need A New Mayweather, It Needs Shakur Stevenson
Shakur Stevenson became a two-weight world champion on Saturday night when he dominated and then stopped [ ... ]
boxing
On This Day In 1990: Holyfield Muzzles Boxing’s Greatest Underdog
When you’re on top of the world, the only way to go is down. Boxing’s ultimate underdog, [ ... ]
boxing
Everything You Need To Know Ahead Of Jamel Herring vs Shakur...
This weekend sees undefeated Olympic silver medalist Shakur Stevenson take on former US Marine Jamel [ ... ]
boxing
Anthony Ogogo Has Gone From The Olympics To Pro Wrestling Stardom
All Elite Wrestling star Anthony Ogogo has not done anything the usual way. Most professional wrestlers [ ... ]
boxing
AJ On The Hunt For A New Trainer, Five Boxing Stories You Might...
All of the talk in the boxing world might be focused on the collapse of Dillian Whyte’s heavyweight [ ... ]
boxing
Catterall Confident Ahead Of Taylor And Backs Chantelle Cameron...
Jack Catterall has warned that Josh Taylor can’t expect to just turn up and expect to win when [ ... ]
boxing
Weekend's Boxing Provides A Fight Of The Year And Upset Of The...
An Upset of the Year contender, a Fight of the Year contender and a big night in Newcastle for British [ ... ]
boxing
On This Day In 1987: Tyson Brings The 15-Round Era To A Brutal...
On this day in 1987, boxing changed forever, as the last ever 15-round world heavyweight title fight [ ... ]
boxing
Brawl On The Tyne: Fury, Marshall And Chris Eubank Jr Descend...
Unbeaten Savannah Marshall makes the second defence of her WBO middleweight championship this Saturday [ ... ]
boxing
Mixed Week For The Eubanks: Five Boxing Stories You Might Have...
Boxing never sleeps, and with Fury-Wilder III in the rearview, attention has turned to exciting fights [ ... ]
boxing
Haye At 41: The World Title Wins That Defined ‘The Hayemaker’
Former two-weight world champion David Haye turns 41 today. ‘The Hayemaker’ is unfairly [ ... ]
boxing
''You Big, Stiff Idiot!'': The Wit And Wisdom Of Tyson Fury
Not content with being the most able heavyweight fighter on the planet, Tyson Fury is also a supreme [ ... ]
boxing
The King’s Gambit: Who Should Tyson Fury Fight Next?
‘The Gypsy King’ has the world at his feet after solidifying his claim to the throne with [ ... ]
boxing
Retirement Or Fight His Way Back: What Happens Now To Deontay...
Deontay Wilder’s stock amongst the boxing community managed to both rise and fall on a damaging [ ... ]
boxing
Tyson Fury Retains Heavyweight Titles In Incredible Trilogy...
The first fight was a resurrection. The second was a demolition. Tonight, Tyson Fury’s 11th-round [ ... ]
boxing
LIVE Tyson Fury v Deontay Wilder 3
Morning all! What are you doing up at this time? It's Tyson Fury v Deontay Wilder. Again! The WBC [ ... ]
boxing
Merseyside Derby: Experienced Smith Awaits For Hungry Fowler
Liam Smith takes on Anthony Fowler this Saturday in a battle for Liverpool supremacy. The former world [ ... ]
boxing
Whyte Lined Up For Fury/Wilder Winner, Five Boxing Stories You...
Ahead of a blockbuster weekend in boxing in the ring, it’s been a pretty busy week out of it. [ ... ]
boxing
The Man Who Beat The Man: Tyson Fury On The Lineal Championship
When Tyson Fury walks to the ring to face Deontay Wilder on Saturday night, he will have two belts in [ ... ]
boxing
Fury vs Wilder III Undercard Preview: Heavyweight Heaven In...
It’s heavyweight heaven this weekend in Las Vegas as not only will fight fans be treated to Tyson [ ... ]
boxing
“I Look At Deontay Wilder Like He’s Stupid” - The Tyson Fury...
“Boxing is not rocket science. It’s me going in there, punching a man's face in. That's [ ... ]
boxing
Happy Birthday, Micky Ward: Remembering The Gatti War That Launched...
The word warrior is thrown around so readily in boxing, it has lost some of its impact. While every [ ... ]
boxing
Liam Smith vs Anthony Fowler: Everything You Need To Know
There’s a monster match-up on Merseyside this weekend when Liam Smith and Anthony Fowler go head-to-head [ ... ]
boxing
On This Day In 1998: Floyd Mayweather Wins First Ever World...
“We believe in our heart of hearts that Floyd Mayweather is the successor in a line that starts [ ... ]
boxing
Undercard? When? How To Watch? Everything You Need To Know About...
Tyson Fury and Deontay Wilder go head-to head for a third time next weekend, with The Gypsy King’s [ ... ]
boxing
UK First Choice For AJ Vs Usyk Rematch, Five Boxing Stories...
There’s news on where Anthony Joshua’s rematch with Oleksandr Usyk could land, a modern [ ... ]
boxing
Rebuild And Reclaim: Why Anthony Joshua Needs A New Trainer
Anthony Joshua looked bereft of ideas as Oleksandr Usyk boxed, moved and pounded his way to a unanimous [ ... ]
boxing
My Name Is Prince: 26 Years Since Naseem Hamed Won His First...
26 years ago today, a Prince was crowned king. ‘Prince’ Naseem Hamed stopped Wales’ [ ... ]
boxing
Eubank Statement: Junior Can Be The Face Of Sky Sports Boxing
Chris Eubank Jr takes to the ring this weekend as the new crown jewel of Sky Sports’ boxing coverage. [ ... ]
boxing
Keep Moving Forward: How ‘AJ’ Can Learn From Lennox The Avenger
Anthony Joshua, the dethroned three-belt king of the heavyweight division, sat stoically in the post-fight [ ... ]