Football
News
Manchester United Women were stunned 3-2 by Championship side Leicester in the FA Cup fifth round
Kieran Spratt
14:36, 17 May 2021

Casey Stoney’s time at the helm of Manchester United Women came to an unceremonious end this weekend as the Red Devils were stunned by Championship winners Leicester City in the FA Cup fifth round on Sunday.

After promotion from the Championship at the first time of asking, and two subsequent top-four finishes in the Women’s Super League, Stoney, 39, announced last week that she would be departing the club she has managed since it was founded in 2018 after the tie against Leicester.

But it wasn’t to be the dream ending Stoney so richly deserved after an incredible tenure in Manchester when a fearless Foxes side triumphed 3-2 in a thriller at Leigh Sports Village. Stoney watched as her side surrendered a 2-1 lead against Leicester, who will be facing United in the WSL next season after securing the Championship title in April.

While Leicester are another step closer to emulating the Foxes' men's side, who beat Chelsea 1-0 at Wembley on Saturday to clinch their first success in the competition, Man United now have a huge gap to fill in Stoney’s absence.

Writing on Instagram on Monday about her exit, Stoney said, ”There are not enough words or actions that can do justice to how grateful and thankful I am to my players, my staff and the fans.

“It has been an honour and a privilege to lead this group of incredible people. They inspired me every day to work harder to be a better manager and a better person. I have memories that I will take with me forever!”

Unlike Stoney, Arsenal boss Joe Montemurro, also managing his final game, had a slightly more emphatic end to his time in the north London hot seat, thumping Crystal Palace with a whopping 9-0 scoreline. The Australian, who has been with Arsenal for three and a half years, now looks set to be named the head coach of Juventus’ women’s team. 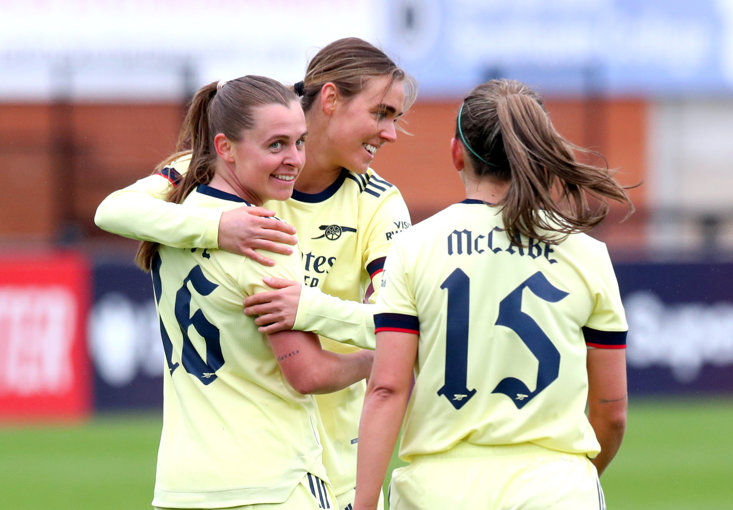 Arsenal Celebrate During Their 9-0 win over Crystal Palace

Fourth-tier Southampton caused a massive upset knocking Championship side Lewes FC out in round four, but, despite another gutsy performance, the Saints were outdone by top-flight Birmingham City 3-2. Manchester City cruised into the next round with a 5-1 victory over fellow WSL side West Ham, while Tottenham Hotspur needed extra-time to beat Championship outfit Sheffield United 2-1. Elsewhere, Brighton & Hove Albion thumped Huddersfield Town 6-0 while Charlton Athletic scraped past Blackburn Rovers with a 1-0 win.

Chelsea, who were in Champions League final action against Barcelona this weekend, will meet Everton in the final fifth round clash of the round at Kingsmeadow on Thursday evening.