Us Sports
News
The day most people in the wrestling business thought they would never see is upon us
Joey Mills
11:05, 26 Jul 2022

Hell has frozen over. For the first time since 1982, Vince McMahon Jr is no longer at the helm of the WWE. There’s also a new champion in Ring of Honor, and a high-profile departure from AEW that came about as a result. Welcome one and all to The Grap Wrap.

It was so widely spouted in wrestling circles that it became almost common knowledge that McMahon would never retire. That his time in charge of WWE would only end when he passed away. A known control freak for whom work absorbs every minute of his time, it seemed simply unthinkable that Vince’s creation would ever exist without him. But on Friday afternoon, the seemingly-impossible came to pass.

McMahon retired from his day-to-day duties as WWE CEO and Chairman via a tweet. To put it into context, McMahon had promoted wrestling for 24 years by the time Twitter even launched as a platform. The idea that he’d shuffle out of view in such a low-key way seemed like anathema to the publicity-hungry executive. This is a man who has held the WWE and ECW heavyweight championships despite not being a trained wrestler. A man who has tried to launch his own boxing promotions, bodybuilding competitions, film studios and football leagues. Doing things quietly is simply not the McMahon way.

The lack of pomp and ceremony surrounding Vince’s departure likely has its roots in the misconduct scandal he is currently facing. Industry insiders are speculating there could be more yet to emerge and that McMahon stepping away is a way of creating distance between the organisation and these allegations. Vince’s daughter, Stephanie McMahon, had already assumed interim control of her father’s duties. She will now work full-time as co-CEO and Chairwoman of the company. Company president Nick Khan has also moved up to fill the other co-CEO position.

Paul ‘Triple H’ Levesque, Stephanie’s husband and Vince’s son-in-law, has also returned to the company in his old role as Executive Vice President of Talent Relations. This job was being filled in an interim capacity by Bruce Prichard, after incumbent John Laurinaitis was named in the misconduct scandal. In a press release on Monday, WWE also confirmed that Triple H will lead the company’s creative department going forward. 'The Game' held an all-talent meeting before Monday Night Raw to outline his intentions for creative going forward, including an emphasis on communication and approachability.

It remains to be seen how this large-scale upheaval will impact WWE in the long-run. Some are speculating that McMahon will still be pulling the strings in the background. However, with WWE operating as a publicly traded company, such subterfuge would open the company up to severe legal penalties. It seems like, at least for now, McMahon really is done with his day-to-day WWE duties. He remains the majority shareholder of the company. 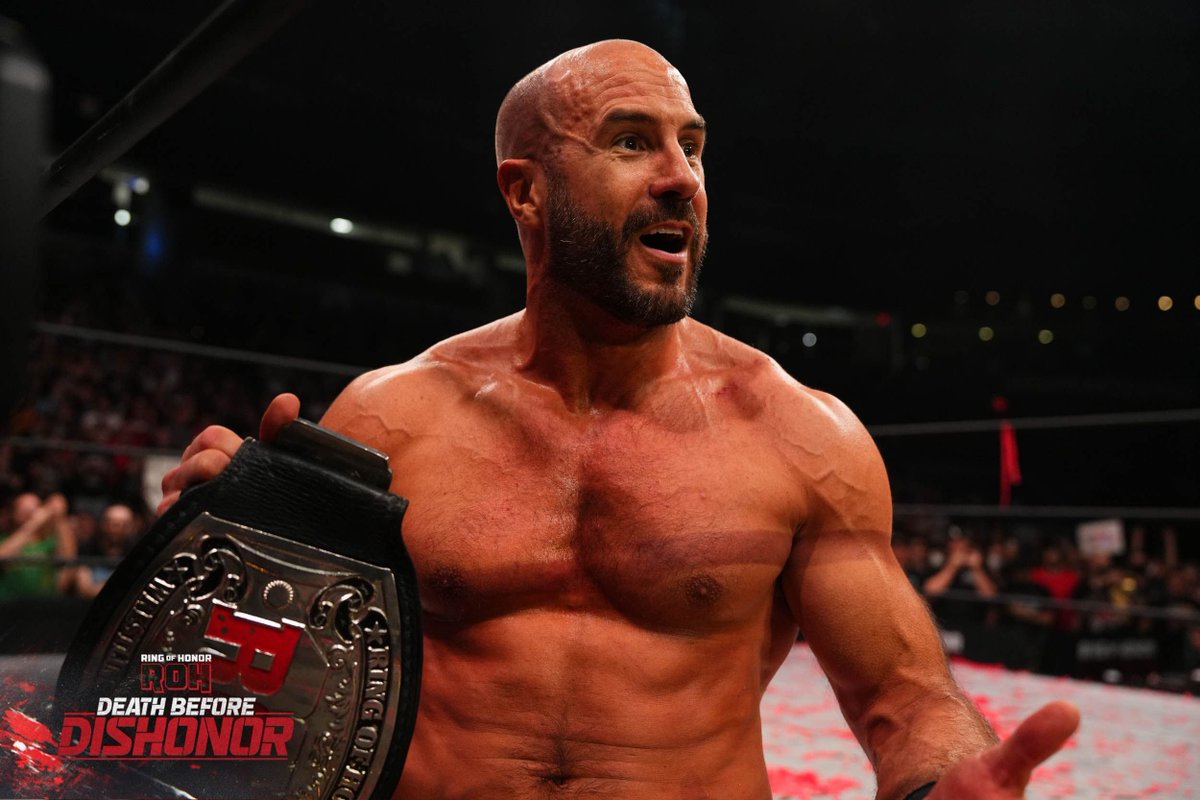 Claudio Castagnoli’s ROH World Championship victory over Jonathan Gresham ended up having wider-spread ramifications than anyone expected. Gresham had held the title for 224 days and the fact that recent WWE superstar Castagnoli, who has been heavily pushed in both ROH and AEW, beat him for the title seemed logical. But it set off a chain of events that is still being unpacked days later.

According to Fightful Select, Gresham “cussed out” ROH and AEW owner Tony Khan before his match with Claudio at Death Before Dishonor on Saturday night. The defeated champion was said to be unhappy with the direction his character was taking and the lack of communication from upper management, particularly Khan, when it came to addressing these concerns.

Gresham has been splitting his time between AEW television and Ring of Honor pay-per-views since Khan bought the latter company back in March. After recently turning heel, Gresham has been heading up the Tully Blanchard Enterprises stable, a villainous group managed by the former Four Horseman member whose name it bears. Blanchard is reportedly also done with ROH and AEW, though no word has emerged on whether his departure is related to Gresham’s. The veteran was written out of storylines at Death Before Dishonor, with control of his faction turned over to Prince Nana. The group will continue as the latest iteration of Nana’s long-running Embassy team.

x
Suggested Searches:
The Sportsman
Manchester United
Liverpool
Manchester City
Premier League
More
us-sports
The Grap Wrap: Why The Stephanie/Triple H Era Is Great News...
There was some doubt over whether WWE owner and CEO Vince McMahon stepping down from his duties was [ ... ]
us-sports
Five American Football Stories You Might Have Missed As NFL...
Oh babyyyy, the 172 day wait for NFL football officially ended on Thursday as pre-season finally kicked [ ... ]
us-sports
The Grap Wrap: Brock Lesnar's Tractor Steals The Show At SummerSlam
The marquee event of the summer ends in utterly incredible chaos, a legend rides out and two future [ ... ]
us-sports
Force Of Nature: The Greatest Matches Of 'Nature Boy' Ric Flair
‘Nature Boy’ Ric Flair steps through the ropes for the final time on Sunday, bringing to [ ... ]
us-sports
Why The UK's Best American Football Stars Are Heading To Europe...
When you speak to people in the United Kingdom about American football they often jokingly claim that [ ... ]
us-sports
The Grap Wrap: Ric Flair's Opponents Revealed For Final Match
A legend picks his final opponents, a social media superstar returns and SummerSlam gets a new match [ ... ]
us-sports
The Grap Wrap: Further Misconduct Allegations Levelled At WWE's...
Vince McMahon’s misconduct issues have gone from bad to worse, Dolph Ziggler returns and All Elite [ ... ]
us-sports
The Grap Wrap: McMahon Attends UFC While WWE Tease Cryptic Surprise
A WWE mystery dominated social media this week, with rampant speculation over the true meaning behind [ ... ]
us-sports
Logan Paul Signs WWE Contract As Showdown With The Miz Looms
YouTube sensation Logan Paul has signed an official contract with WWE as he continues to make strides [ ... ]
us-sports
The Grap Wrap: AEW x NJPW Forbidden Door Special Including Cesaro's...
AEW kicked open the Forbidden Door this past Sunday, and a lot of newsworthy happenings fell out. There [ ... ]
us-sports
NBA Draft 2022: The Orlando Magic Select Paolo Banchero As First...
The Orlando Magic selected Paolo Banchero as the first pick in the 2022 NBA Draft on Thursday at the [ ... ]
us-sports
The Grap Wrap: Vince McMahon Embroiled In 'Hush Money' Scandal
It’s been a bumper week of wrestling news, with the more controversial side of the squared circle [ ... ]
us-sports
Phil Jackson: The Man Who Elevated Jordan And Bryant To The...
You hear Chicago Bulls, you think Michael Jordan. You hear Los Angeles Lakers, you think Kobe Bryant. [ ... ]
us-sports
The Grap Wrap: Bray Wyatt To Return? MJF's Flight Drama And...
Good morning grapple fans, and welcome to a new semi-regular professional wrestling column from The [ ... ]
us-sports
Colin Kaepernick, The NFL Star Rather Than Activist, Might Be...
Google Colin Kaepernick. There he is, the ‘American activist’. Check out Wikipedia. Oh yes, [ ... ]
us-sports
On This Day 20 Years Ago, The British Bulldog Davey Boy Smith...
On 18th May 2002, ‘British Bulldog’ Davey Boy Smith passed away from a heart attack at the [ ... ]
us-sports
NBA Playoffs Resume After Chaotic Exits For Champion Bucks And...
It’s been a tremendous few days in the NBA and this week’s conference finals, which start [ ... ]
us-sports
Ric Flair Returns At 73: The Nature Boy Will Walk That Aisle...
“To be the man, you gotta beat the man!” ‘Nature Boy’ Ric Flair has uttered [ ... ]
us-sports
There Are Storylines Everywhere You Look In The NFL's Week 1...
Something the NFL seem to be willing to do is make their sport a spectacle through their own power. [ ... ]
us-sports
Chuck Daly: 'Daddy Rich' Tamed Rodman, Bagged Isiah His Rings...
Entering a debate on the greatest sports sides in history should inevitably reach a particular conclusion. Avoiding [ ... ]
us-sports
'We Want RK-Bro! We Want The Usos!': No One Is Safe From Sasha...
When WWE Women’s Tag Team champions Sasha Banks and Naomi first joined WWE, the landscape was [ ... ]
us-sports
Everything You Need To Know About WWE WrestleMania Backlash
The wait ends this weekend, as WWE returns with their first Premium Live Event since WrestleMania. This [ ... ]
us-sports
The Crazy Times Of Kareem Abdul-Jabbar, The NBA All-Star Who...
This article first appeared in The Sportsman on 05/05/20 Being the number one draft pick in the NBA [ ... ]
us-sports
Blood Brothers: Randy Orton And Riddle Talk Chemistry, Growing...
The old adage dictates that opposites attract, and on the face of it that certainly seems true of RK-Bro. [ ... ]
us-sports
The NFL’s Best Trades and Free Agency Signings So Far
It’s the same every year. Almost as soon as the Vince Lombardi Trophy is awarded, attention turns [ ... ]
us-sports
Impact Wrestling's D'Lo Brown: We Didn't Open The Forbidden...
It is such an overused phrase that it has become cliched, but Impact Wrestling’s D’Lo Brown [ ... ]
us-sports
How ‘The Last Dance’ Brought Michael Jordan's Chicago Bulls...
It's now been 26 years since the Chicago Bulls ended the NBA season with a record of 72 wins and [ ... ]
us-sports
On This Day In 2018: WWE Icon Bruno Sammartino Passes Away
There have been 30 WWE Championship reigns in the last 2,803 days. In the 2,803 days between 17th May [ ... ]
us-sports
Why Jackie Robinson Day Means As Much Today As It Ever Has
Across Major League Baseball on Friday, number 42 will pitch to number 42. Number 42 will field the [ ... ]
us-sports
Frank Vogel Out: Who’s Next In The Hot Seat For The LA Lakers?
Head Coach Frank Vogel has paid the price for the Los Angeles Lakers’ poor campaign, as they failed [ ... ]