Us Sports
News
The Sportsman was there to witness a spectacular day in Tottenham
Sam Penfold
20:01, 09 Oct 2022

Experiencing an NFL game for the first time was simply sensational. From playing musical buses and trains to avoid the ever-present and fittingly inconvenient train strikes I did what I could to get down to London in a somewhat timely manner. Once I’d left my bags, I turned around and headed straight to the NFL store to try and catch some eagerly awaiting fans. Giants running-back Saqoun Barkley had already been and gone but AJ Dillion of the Green Bay Packers arrived at 3:30pm so all was not lost. Watching on from the balcony above, waves of Packers fans wandered down the steps to meet one of their beloved players. The queues seemed endless. Handshakes, hugs and high fives combined with a photo opportunity gifted many of these fans a moment some thought would never come.

Upon arriving at the stadium around 10:15am the following morning, I found myself in the line next to former NFL player and Green Bay Packers defensive captain, Johnnie Gray. We spoke as if we’d known each other for years as we wandered inside and collected our media accreditation. He was with a few members from Fox News whose names escape me but they were friendly and encouraging. The weather outside was pristine, it was the perfect weather for football and everyone inside and outside the building was ready. It was vibrant, energetic and cheerful. All the spectators were in good spirits.

The game day itself was a brand new experience. Getting to the Tottenham Hotspur stadium for the first time, taking in the vast structure and of course the iconic golden cockerel away to the east side of the ground. People from all different places, organisations and experiences gathering in one place for the first Green Bay Packers game in England. All 32 teams have now played in the UK and you can only imagine plenty will want to be back. Stepping out from the concourse and soaking up the view for the first time was breathtaking. The fans filtered inside as soon as the gates opened, with waves of Packers green swallowing up the puddles of Giants blue.

NFL UK
@NFLUK
Dare to do Different.
@saquon out here in @SpursOfficial's third kit, @nikefootball!
The boots too... 🔥
#NFLUK 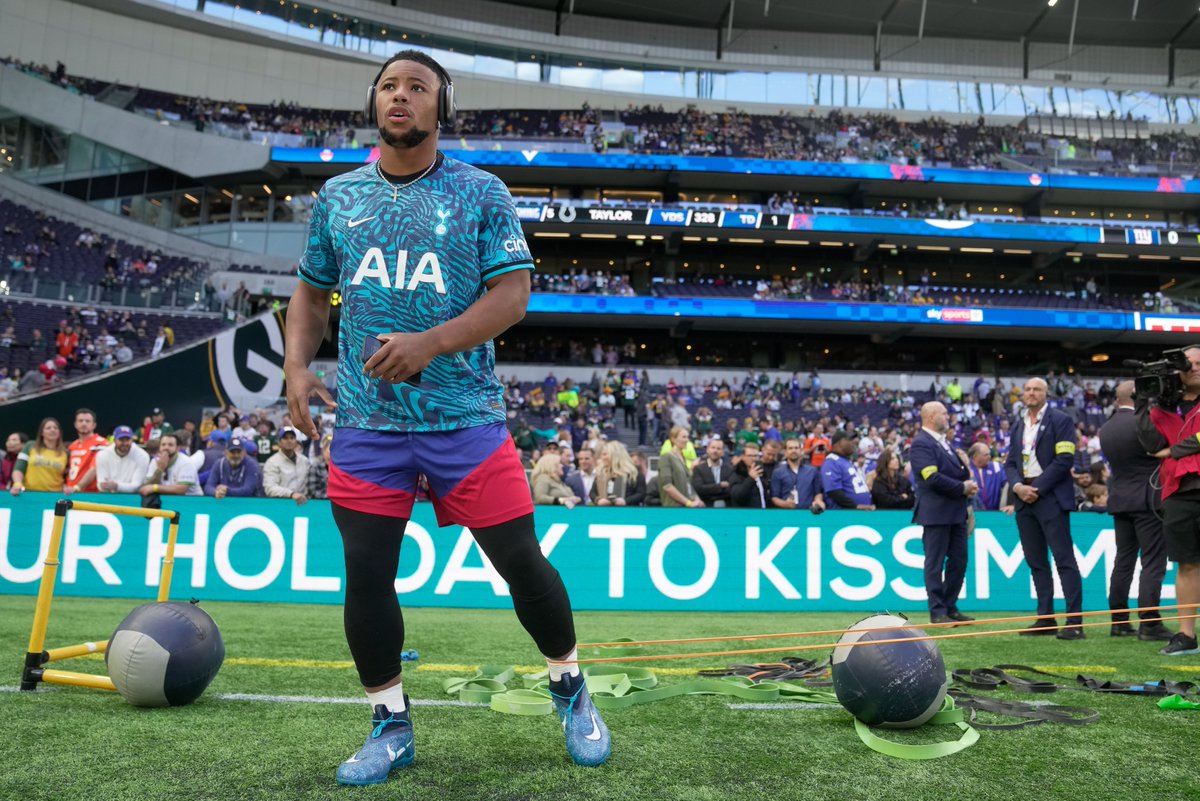 35 minutes before kick-off and the stadium’s lower tiers were packed, the media seats started to fill up and the teams were out warming up. Seeing the size of these NFL athletes up close was a stark reality check on the force and power they possess, something you don’t truly appreciate through a TV screen. After mingling with the nearby fans, I took to my seat to watch the players sprint out of the tunnel, Giants greeted by a chorus of boos while the Packers, very much the favoured team, ran out to cheers from a near-capacity Tottenham Hotspur stadium.

With the game underway, a big reception from Randall Cobb on 3rd down got the crowd on their feet as Green Bay stormed down the field on the opening drive. After an incompletion on another 3rd down, Mason Crosby trotted out to kick a 46 yard field goal to give the Packers an early 3-0 lead.

Now it’s the Giants turn on offence and with Daniel Jones sitting in sixth in our Quarterback power rankings, a live look at his performance could work out in his favour. A three and out on his first possession was not the best reflection on his abilities. Back-to-back drives stalling for the Giants gave Green Bay the perfect chance to extend their advantage as the first quarter wound down. Pass interference on Robert Tonyan from Xavier McKinney gave Aaron Rodgers the chance to get his team on the board and he duly obliged, linking up with Allen Lazard for a four-yard touchdown. 10-0. 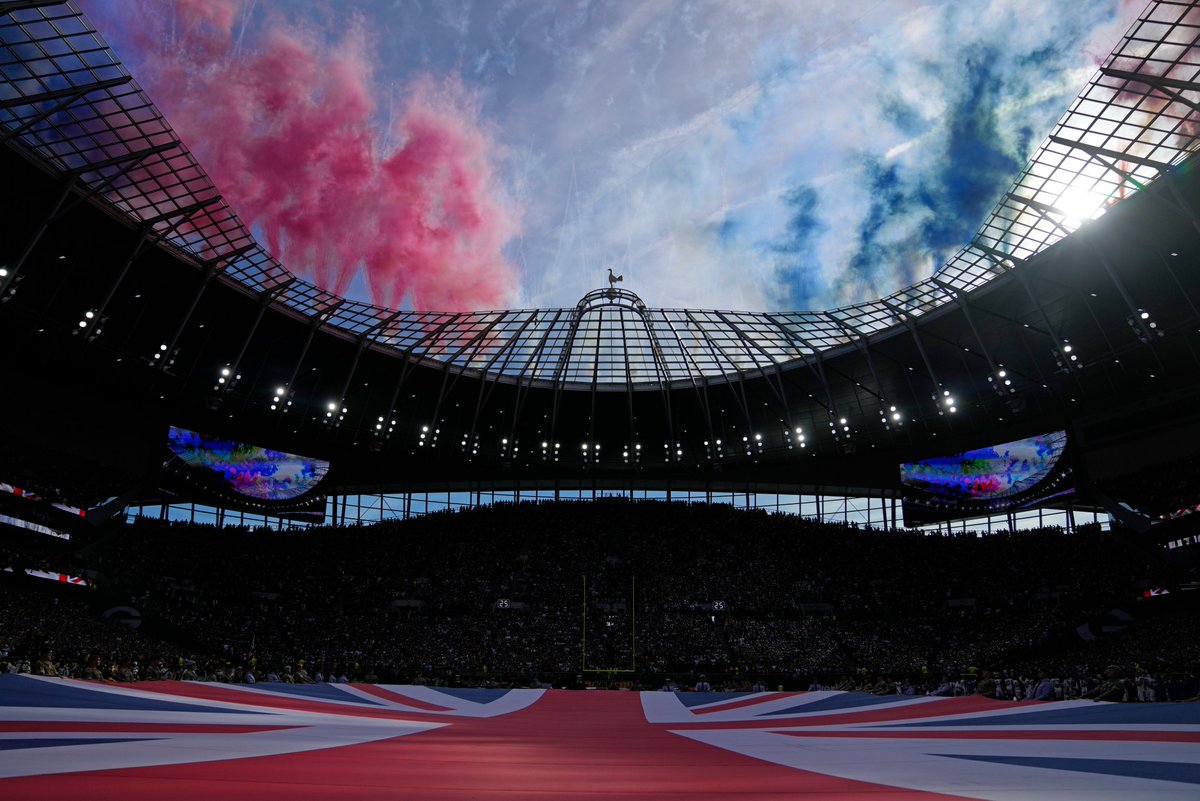 Third drive lucky for the Giants as they finally looked like they were clicking on offence as Daniel Jones connected with Darius Slayton for a 23 yard play but fouls and incompletions on the following plays left Graham Gano with a 48 yard field goal. Giants on the board, 10-3 after the first quarter.

The Packers wasted no time extending their lead as a little confusion with two fake handoffs left Packer Tight End (TE), Marcedes Lewis, all alone in the endzone. 17-3. That might’ve been the wake up call that New York required, with Saquon Barkley breaking away for 40 yards to get into opposition territory. On a much needed 3rd down Daniel Jones found the ever-reliable Darius Slayton for 14 yards before the two-minute warning arrived. The immediate aftermath saw New York get their first touchdown, with rookie tight-end Dan Bellinger the recipient.

Aaron Rodgers’ team wasn't done just yet, getting themselves down the field with seconds to spare in the first half before Mason Crosby came out to make it a 10 point game. 20-10 at the half.

Tucking into some chicken tenders and wedges, along with what looked like half the rest of the media personnel, the second half got started. A Daniel Jones scrabble bought a big cheer from the crowd before the drive stalled and the Giants settled for a 3 point conversion. There was some worry for New York fans with 5 minutes to go in the third quarter as Saquon Barkley went into the medical tent. Their fears appeared short lived as he emerged a few minutes later but didn’t return until the fourth quarter.

With ten minutes to go in the fourth quarter, Gary Brightwell who replaced Barkley ran it up the middle to convert a three-yard touchdown to make it 20-20. The Packers then went three and out but nearly got another chance after the Giants muffed the punt. Fortunately for them, the ball bounced out of bounds. An extended break to allow the fans to sing ‘Sweet Caroline’ gave Barkley more than enough time to recover as he broke a huge play into Packers territory for 41 yards. On a play that would’ve put the Giants in a 3rd and goal situation from the ten yard line, Packers defensive-back Rasul Douglas gave away an unnecessary roughness penalty, gifting New York the perfect opportunity to take that lead. Sure enough, with Saquon Barkley back in the game, taking the snap directly he ran to the right to give the Giants their first lead of the day. 20-27 with 6 minutes to go. Advantage the underdogs.

Today’s attendance of 61,024 marks a new record for the NFL games at the Tottenham Hotspur stadium. The Giants defense produced a monster stop with the Packers on 4th down with 2 yards to gain. Rodgers went for the throw but an on-rushing Xavier McKinney tipped the attempted pass. The crowd erupted and that was the ball game. 22-27. The Giants had stunned the Packers.

This experience was electric, the fans were sensational, the atmosphere amazing. These London match-ups are huge for the UK game and the consistently high attendance levels throughout the years would tell you just that. We already can‘t wait for Denver Broncos vs Jacksonville Jaguars at Wembley in a few weeks time.