You’d have thought British boxing would have got the hang of this by now. Oleksandr Usyk flies into the country, beats the brakes off an English fighter, and if they have any belts he leaves with them in his luggage. Tony Bellew found this out in 2018, while 2020 was Derek Chisora’s turn. Yet, Usyk was still a betting underdog when he travelled to the Tottenham Hotspur Stadium to face Anthony Joshua in September of this year.

In fairness, this time did feel different to his previous visits. ‘The Cat’ was a supreme cruiserweight, and had the undisputed championship in tow when he came to meet Bellew. It was clear from the outset that ‘Bomber’ faced a tall task against the only man to ever unify the four cruiserweight belts. While Chisora was given a slightly better chance than the scouser, Usyk still fit the profile of the sort of elite level operator you need to be to beat ‘Del Boy’. But ‘AJ’ presented a new challenge for a number of reasons.

For a start, Usyk was bidding to become just the third former cruiserweight champion to move up and win a version of the heavyweight title. Evander Holyfield and David Haye were the only fighters who had ever made the jump successfully. Secondly, Joshua’s only defeat had been administered by a man who weighed 47 pounds more than Usyk did on fight night, in Andy Ruiz Jr. Power, it seemed, was the way to get to ‘AJ’. By contrast, Usyk weighed 19 pounds less than Joshua when they met on that September night at the Tottenham Hotspur Stadium.

Size only gets you so far in the squared circle though, and while Anthony Joshua did little to impose his, Usyk relied on his speed and superior skills to box brilliantly. The gifted Ukrainian stood right in front of the champion at times, and still Joshua could not hit him. Usyk’s head movement, timing and dazzling combinations were unlike anything the home fighter had been in the ring with. Usyk’s arsenal was also unlike anything Joshua was expecting, judging from his nervous smiles and puzzled demeanour. The Watford heavyweight had come to play Connect Four, but he could barely connect with one meaningful shot. Meanwhile, Usyk had come to play 4D chess, and he just happened to be a grandmaster. 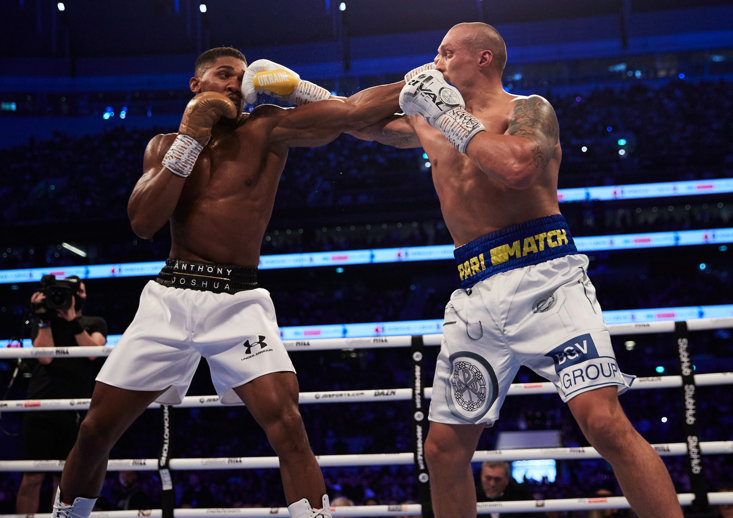 Given they happened less than a month from each other, it is natural that Tyson Fury and Usyk’s twin-triumphs would be compared. They were both equally beguiling in their own way. ‘The Gypsy King’ showed tremendous heart, courage and power in breaking down Deontay Wilder. But Usyk went about his work like a surgeon, picking apart the skills, and then the confidence, of a unified heavyweight king. Fury diced with danger, Usyk neutralised it. The WBC champion robbed the bank with a bulldozer, the new unified king did it by dressing as a security guard and picking the lock to the vault. Both viable approaches, and 2022 might bring us a fascinating clash of the two.

After a history-making year, it looks like Usyk will need to repeat the trick in order to secure further achievements next year. Anthony Joshua looks intent on activating his rematch clause, with Fury likely to be otherwise engaged. But after making cruiserweight history, then winning three quarters of the heavyweight crown in front of a packed stadium, it is difficult to bet against Oleksandr Usyk doing anything he puts his mind to. This truly special talent could have even more in store for us in 2022.

Boxer of the Year 4: Josh Taylor

Boxer of the Year 3: Tyson Fury

x
Suggested Searches:
Manchester United
Liverpool
Manchester City
Marcus Rashford
Premier League
More
boxing
The Baddest Men On The Planet: Francis Ngannou And Ciryl Gane...
UFC Heavyweight Champion Francis Ngannou will clash with Interim Champion Ciryl Gane this Saturday in [ ... ]
boxing
When Roberto Duran Proved He Was Boxing's Greatest Ever Lightweight
Weeks away from immortalising himself as the greatest lightweight to ever step foot inside the [ ... ]
boxing
Rematch Of 2019’s Fight Of The Year Inbound? Five Boxing Stories...
We could be getting a sequel to 2019’s Fight of the Year, Francis Ngannou is eyeing up Tyson Fury [ ... ]
boxing
Everything You Need To Know About Gary Russell Jr Vs Mark Magsayo
WBC featherweight champion Gary Russell Jr will fight for the first time in two years on Saturday, as [ ... ]
boxing
On This Day: Roy Jones Jr Turns On The Old Magic Against Felix...
Boxers don’t always face off when we want them to. Unlike other sports, where league systems or [ ... ]
boxing
As He Faced The Son He Cast No Shadow: Chris Eubank Jr. Must...
Chris Eubank Jr. takes on Liam Williams in the year’s first big domestic dust-up next month at [ ... ]
boxing
''I Shook Up The World!'': The Moment Cassius Clay Truly Became...
On what would have been his 80th birthday, it is only appropriate to pay tribute to the cultural icon [ ... ]
boxing
Terence Crawford Sues Top Rank, Five Boxing Stories You Might...
It’s been another busy week in the world of boxing which has seen lawsuits, new signings and some [ ... ]
boxing
Heavyweight Frazer Clarke To Make Professional Debut On Khan...
Frazer Clarke will make his professional, Sky Sports and Boxxer debut on the undercard to the highly-anticipated [ ... ]
boxing
War Of The Worlds: When Boxers And MMA Fighters Collide
Boxing and UFC’s world heavyweight champions have been exchanging fighting talk on social media [ ... ]
boxing
Brand New Heavies: There's Big Men Beyond Fury, AJ, Usyk and...
The heavyweight division is as stacked as its been at any point since the 1990s. In Tyson Fury and Oleksandr [ ... ]
boxing
World Titles And Returning Kings: 2022 Could Be A Year Of Welter...
The first big welterweight clash of the year is close to being confirmed, as WBC and IBF champion Errol [ ... ]
boxing
On The Regular: The Ridiculous History Of The WBA Regular Heavyweight...
If you’re a long-time boxing fan, you’d be forgiven for thinking the abbreviation WBA stands [ ... ]
boxing
Lawrence Okolie To Move To Heavyweight? Five Boxing Stories...
It’s been a busy first week of 2022 in the world of boxing with Lawrence Okolie looking to mount [ ... ]
boxing
Undisputed Showdown With Fury Would Be Historic Night For Boxing,...
Unified heavyweight champion Oleksandr Usyk could face Tyson Fury in a unification clash instead of [ ... ]
boxing
The Sportsman Boxing Power Rankings: January
The Sportsman Boxing Power Rankings is a monthly series ranking boxers on a number of factors to determine [ ... ]
boxing
Floyd Mayweather Lines Up Exhibition With YouTuber Money Kicks
50-0 boxing icon Floyd ‘Money’ Mayweather is set to return to the ring once again in 2022. [ ... ]
boxing
Ortiz vs Martin Can Prove Boxing Doesn't Have To Be Elite To...
Exciting sport is not solely predicated on the elite meeting the elite. While clashes of the world’s [ ... ]
boxing
Boxing's Biggest And Best Knockouts Of 2021: Featuring Fury,...
It’s been a busy half-year of boxing for me, finally getting back out on the road after the various [ ... ]
boxing
Andy Ruiz Jr Next For Tyson Fury? Five Boxing Stories You Might...
The fights may have slowed down to give everyone a Christmas break, but boxing’s powerbrokers [ ... ]
boxing
The Kings & Queens Of Promise: The Boxers To Watch In 2022
2022 already promises so much on the boxing front. Saul ‘Canelo’ Alvarez is set to move [ ... ]
boxing
Five Fights We Want In 2022: Will We Finally See Fury Vs AJ...
What a year it’s been inside the squared circle in 2021. We saw Saul ‘Canelo’ Alvarez [ ... ]
boxing
Where Are They Now? The 2005 ABA National Championship Winners
The roll call of the 2005 ABA National Championship is utterly stacked with talent. The 119th iteration [ ... ]
boxing
Her Ring Too: Women’s Boxing Set For Bumper 2022 After Thriving...
2021 was a banner year for women’s boxing. We saw thrills and spills, upsets and dominations. [ ... ]
boxing
Make Boxing Day 'Boxing' Again: The Fights To Watch This 26th...
Your internal organs are 60% turkey, your Nan made you watch the Queen’s speech and you had to [ ... ]
boxing
Move Over Die Hard, Rocky IV Is The Ultimate Underrated Festive...
“Is Die Hard a Christmas film?” It’s a debate that has raged and swirled around this [ ... ]
boxing
Jake Paul Vs Former Middleweight Champ? Five Boxing Stories...
Errol Spence will find himself in an early unification fight next year, Triad Combat is somehow returning [ ... ]
boxing
The Sportsman Boxer Of The Year - Saul 'Canelo' Alvarez
It’s been quite a year in the squared circle. Trilogies have reached their brutal conclusion, [ ... ]
boxing
The Sportsman Boxer Of The Year - Number 3: Tyson Fury
It’s been quite a year in the squared circle. Trilogies have reached their brutal conclusion, [ ... ]
boxing
UFC Legends, Boxing Superstars Or His Own Brother: What’s Next...
Jake Paul moved to 5-0 (4) with a sensational sixth round stoppage of Tyron Woodley on Saturday night. [ ... ]