Ufc
News
Edwards dominated Nate Diaz last time out but he still has to wait on a title shot
Steven Allen
12:43, 28 Jul 2021

A busy week for the UFC began with the announcement of a Welterweight title defense and a highly-anticipated rematch, with Kamaru Usman facing old foe Colby Covington on November 6th.

In a week where Conor McGregor made headlines for his vile comments on social media, MMA fans can be happy with the organisation’s latest announcement. The last time Usman and Covington met, Covington was KO’d by the ‘Nigerian Nightmare’ in round five of an incredible title fight, leaving Covington with a shattered jaw.

It was an instant classic and Usman has gone on to be one of the best pound-for-pound fighters in the UFC, whereas Covington’s only returned to the cage once since, beating Tyron Woodley. 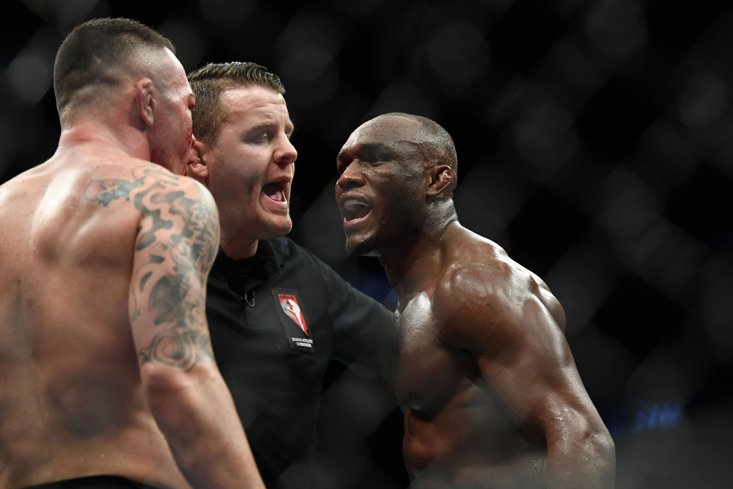 Although fans can be happy with the latest announcement, spare a thought for British UFC star Leon Edwards. Having joined the UFC roster back in 2014, Edwards has put together an impressive resume, with the sixth-fastest KO in UFC history, as well as beating the likes of Donald Cerrone, Rafael dos Anjos and most recently Nate Diaz.

However, the last two years in the UFC have been more than a challenge for him due to Covid complications, accidental eye pokes and even being removed from the welterweight rankings due to fight cancellations.

Out of the fighters who chose to fight during the pandemic, Edwards had the most turbulent time, with his fight against undefeated prospect Khamzat Chimaev being cancelled four times due to both fighters catching COVID, including Edwards’ rapidly losing 12 pounds in December 2020 after having the illness.

Eventually, the fight was scheduled with Belal Muhammad replacing Khamzat Chimaev, but it didn’t get past the second round, as the Englishman accidentally eye-poked Muhammad and he was unable to continue, destroying Edwards’ 8-fight win streak with a no contest.

Finally the Brit found some luck. Nate Diaz was in his crosshairs and they fought at UFC 263 in the first ever non-main event and no-title five round fight. Edwards dominated the first four rounds, moving sharply around the cage and unloading strikes quickly in half-spaces against an effervescent Diaz. 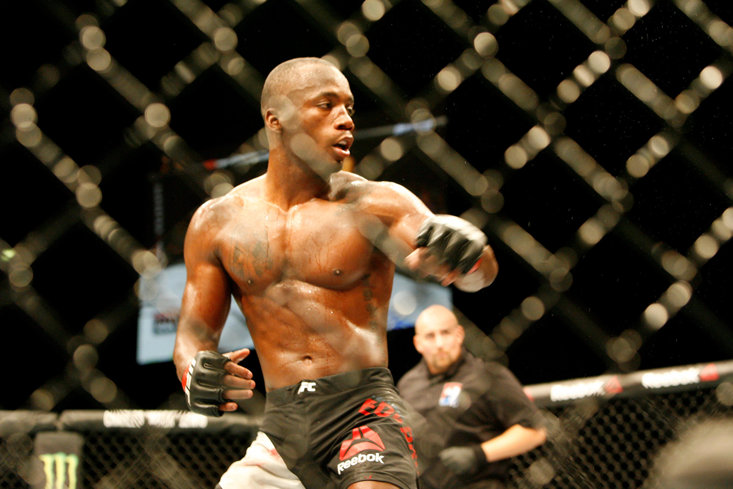 It was the fifth round that excited the crowd, and with good reason. Diaz caught Edwards with a huge hit with just 65 seconds left in the fight, and Edwards was seriously rocked and could’ve ended up losing the fight if he didn’t evade Diaz as well as he did. Alas, he was the victor that night, and even though the fans talked about the last minute of the fight, Edwards dominated an MMA legend and deserves to take the next step.

In the meantime, welterweight’s number two Gilbert Burns has been quick to offer Edwards a fight on the undercard of Usman vs Covington rematch, which would act as a title eliminator to see who would be the next challenger for Usman or Covington.

x
Suggested Searches:
Manchester United
Liverpool
Manchester City
Marcus Rashford
Premier League
More
ufc
Where? When? How To Watch? Everything You Need To Know About...
The UFC returns to pay-per-view this weekend with a stacked card. There are two world title fights, [ ... ]
ufc
UFC 266: Why Joshua vs Usyk Isn’t The Only Fight Worth Watching...
The UFC returns to pay-per-view on Saturday night with a stacked card emanating from the T-Mobile Arena [ ... ]
ufc
UFC Fight Night 192: Light Heavyweights Lead The Way In Nevada
The UFC returns this Saturday with Fight Night 192, two weeks removed from Liverpool’s Darren [ ... ]
ufc
For Whom The Bell Tills: What Next For ‘The Gorilla’?
Darren Till’s third-round submission loss to Derek Brunson on Saturday night has left the Liverpool [ ... ]
ufc
Viva Scouse Vegas: Liverpool’s MMA Royalty Descends On Nevada
The UFC Apex in Enterprise, Nevada is bracing itself for a British invasion on Saturday night, as the [ ... ]
ufc
Chikadze vs Barboza: Georgia’s Skilled Striker Faces Tough Test...
Giga Chikadze might’ve began his UFC career with a loss, but since his shortcoming on Dana White’s [ ... ]
ufc
UFC Fight Night Sees The British Take Over Las Vegas Led By...
The stage has been set for the UFC to return to the UK since Jorge Masvidal’s famous knockout [ ... ]
ufc
What Next For Conor McGregor After UFC 264 Loss To Dustin Poirier?
Conor McGregor’s future has been left up in the air after he suffered his second defeat in six [ ... ]
ufc
Your Guide To UFC 264 As Conor McGregor And Dustin Poirier Clash...
The much-anticipated trilogy between Conor McGregor and Dustin Poirier goes down on Saturday, July 11 [ ... ]
ufc
Who Is Conor’s McGregor's UFC 264 Opponent Dustin Poirier?
Dustin Poirier will take on Conor McGregor inside the Octagon for a third time at UFC 264 this [ ... ]
ufc
From Notorious Knockouts To Ruthless Rivalries, McGregor's Best...
Conor McGregor, the UFC’s divisive poster boy, returns to the cage on Sunday morning at UFC 264 [ ... ]
ufc
From Biggie To Joe Frazier, Rating Conor McGregor's Most Notorious...
Conor McGregor makes his return to Octagon on Saturday night when he takes on Dustin Poirier for a third [ ... ]
ufc
UFC 264: Everything You Need To Know Ahead Of Conor McGregor...
Conor McGregor and Dustin Poirier will be going at it for a third time this weekend, headlining a stacked [ ... ]
ufc
Your Guide To UFC 263, As Israel Adesanya Takes On Marvin Vettori
UFC 263 rolls into Arizona this weekend, with the small matter of a rematch between Israel Adesanya [ ... ]
ufc
Charles Oliveira Could Fight Conor McGregor In Brazil After...
Brazilian superstar Charles Oliveira could take on Conor McGregor in his homeland after he pulled off [ ... ]
ufc
UFC 262 Preview: A New Heir To The Lightweight Throne Will Be...
It’s been more than three years since we have seen anyone other than Khabib Nurgmagomedov wear [ ... ]
ufc
UFC 261: Jorge Masvidal Suffers First Knock Out As Kamaru Usman...
If the build-up to UFC 261 was hyped up, the night itself exceeded all expectations. In a stunning main [ ... ]
ufc
Kamaru Usman Hints He Could Walk Away After UFC 261 Clash With...
UFC welterweight champion Kamaru Usman has suggested he could walk away from the Octagon after his main [ ... ]
ufc
UFC 261: All You Need To Know Ahead Of A Blockbuster Night In...
Fight fans are in for a real treat in the Octagon this weekend with UFC 261 serving up a blockbuster [ ... ]
ufc
Conor McGregor Cancels Dustin Poirier Trilogy Due To Dispute...
Conor McGregor has insisted his trilogy fight with Dustin Poirier is off after the pair were involved [ ... ]
ufc
New Lightweight Champion To Be Crowned At UFC 262 After Khabib...
It is looking increasingly likely that a new lightweight champion will be crowned at UFC 262 with Michael [ ... ]
ufc
UFC Set To Return In Front Of A Full Crowd With A Stacked Card...
After more than a year of coronavirus-induced capacity restrictions, the UFC is set to finally return [ ... ]
ufc
Four Champions And Three Undisputed Titles On The Line At UFC...
UFC 259 features four champions, as middleweight king Israel Adesanya moves up to 205lbs to battle the [ ... ]
ufc
Bold, Brash And Wealthy, Has Conor McGregor Simply Become Too...
Big and tough as he was, King Kong needed the Empire State Building; the big Silverback just wouldn’t [ ... ]
ufc
Everything We Know About Dana White And The UFC's Fight Island...
Ultimate Fighting Championship president Dana White has been vocal in his commitment to holding UFC [ ... ]
ufc
How Anime Fuelled Israel Adesanya's Ambition, Ability And Style...
Every so often, in every sport, a truly unique character arrives with seemingly the sole purpose of [ ... ]
ufc
Is Banking £1.5Million Per Second Enough To Keep Conor McGregor...
Find someone who looks at you the same way Dana White looks at Conor McGregor. Dana needs Conor. He [ ... ]
ufc
Donald 'Cowboy' Cerrone Is The Adrenaline Junkie Who Has Cheated...
Very, very few of us would dare take on Conor McGregor in a staring contest, let alone have the guts [ ... ]
ufc
''I Need MMA'' - Only The Octagon Can Bring Redemption For Conor...
Conor McGregor is back and, boy, is he glad. The Irishman returns to the cage this weekend to duke it [ ... ]
ufc
McGregor's Talk Of A Boxing Comeback Is Proof He's Running Out...
Conor McGregor is currently preparing for his comeback bout at UFC 246, which takes place at the T-Mobile [ ... ]