Before Portugal kicked off against Switzerland in their World Cup round of 16 tie, you could not move for Ronaldo talk. The 37-year-old free agent had been benched by head coach Fernando Santos ahead of the crucial knockout game. Santos said the issue came down to “fluidity”, talking up the fact Benfica’s Goncalo Ramos offered more movement than the “fixed” Ronaldo.

So did the gamble of leaving out the former best player in the world pay off? Considering Portugal won 6-1, with three of those goals scored by Ramos, you’d have to say it just about did. Ronaldo is unwillingly entering an era of diminished importance, but what of his replacement? Who is Goncalo Ramos, the 21-year-old forward who has just taken the world by storm?

Fans of Leeds United and Southampton will recognise the name as one they were linked with over the course of the summer transfer window. With all due respect to the two Premier League clubs, you would have thought a hat-trick in a World Cup knockout game would put Ramos on the radars of teams a little further up the league.

For all his undoubted quality, it is fair to assume few, outside of maybe Santos and the player himself, predicted this Earth-shattering introduction to the world. Ramos had just three substitute appearances for his country to his name before Tuesday’s heroics.

However, watchers of the Primeira Liga in Portugal will be well aware of Ramos’ abilities. The Benfica forward has 14 goals and six assists across 21 games for Os Encarnados this season. Coming into the tournament, he has scored seven goals in his last six league games. If there is ever a player for whom the 2022 World Cup arrived at the perfect time, that player is Goncalo Ramos. 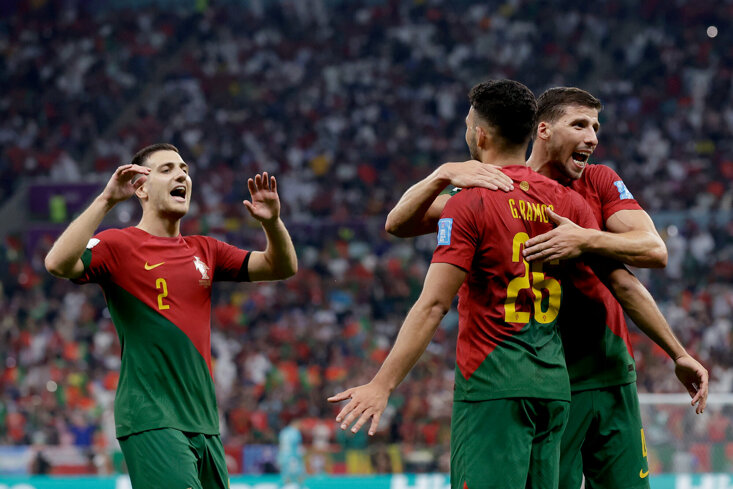 Coming of age last season, playing 46 games for Benfica as a 20-year-old, Ramos’ time appears to be at hand. The inevitable international call-up followed and he is clearly impressing staff at Os Navegadores. Awarding a young player their very first international start in a World Cup knockout game is a tremendous show of faith. A hat-trick and an assist in that game, with the added pressure of replacing the most famous player on Earth, is vindication for that show of faith.

The Sportsman has cautioned against putting too much stock in signing players who excel on this stage before. While it is easy to envision scouting departments in the Premier League and beyond going into overdrive after Portugal’s win, it would make sense to hold fire. But the most exciting part of this story is the fact Ramos will surely get a chance to dazzle us once more.

Portugal go up against Morocco in their quarter-final tie on Saturday. As was the case so often at Old Trafford in the first half of the season, starting Ronaldo ahead of a more vibrant colleague is likely a gamble not worth taking. Ramos provides the sort of direct, unencumbered attacking verve that Spain were badly missing in their penalty defeat to the African side. The Benfica wonderkid would likely be harder to shackle than the often sterile Spanish contingent, or even the static Ronaldo.

So who is Goncalo Ramos? He is an overnight sensation. A name you will be hearing a lot more often from now on. A new face on the endlessly-churning transfer merry-go-round. A Portuguese hero. What we don’t know yet is whether he is an enduring talent that will touch the high ceiling of the world’s game. But we’re sure to have a lot of fun finding out. Viva Goncalo.