The Tyson Fury and Anthony Joshua saga has gone back and forth in the last few days. The Gypsy King took to social media on Monday, the supposed set deadline for Joshua to sign the contract for the fight, and said that his rival had not done so. He effectively called the fight off while slamming Joshua in the process.

A few days later, he gave another update, once again on social media, saying that the deadline had been extended to Thursday, but as of yet, on Friday, we are still awaiting an update on that front, while it has been reported he will now face Germany-based heavyweight Manuel Charr instead.

Despite a potential ‘Battle of Britain’ being of huge interest in the UK, there are some who would rather see Fury beat someone different that would provide more of a challenge given that Joshua had lost his previous two bouts to Oleksandr Usyk, losing his belts in the process.

Fury wouldn't be short of options for another heavyweight clash and everyone seems to have a different opponent in mind for the WBC and The Ring magazine title holder.

Here are potential opponents Fury should fight according to our readers.

Given that the Ukrainian bested Joshua on two opponents, many feel that Fury should take up this fight, which Usyk has offered. While it may not be as marketable as a clash with Joshua, it could be a more entertaining fight and of course it would see one of the fighters crowned as the undisputed champion.

Scott Hewson said: “Usyk is the way forward for him to claim all the belts, complete his legacy and his personal goals.”

He also believes that the fight with Joshua should have happened long before now.

He added: “Joshua is a money fight for bragging rights and nothing more. The fight offers nothing for Fury other than to please the masses. This particular fight should have happened years ago in my opinion. There’s others who deserve a shot ahead of him.” 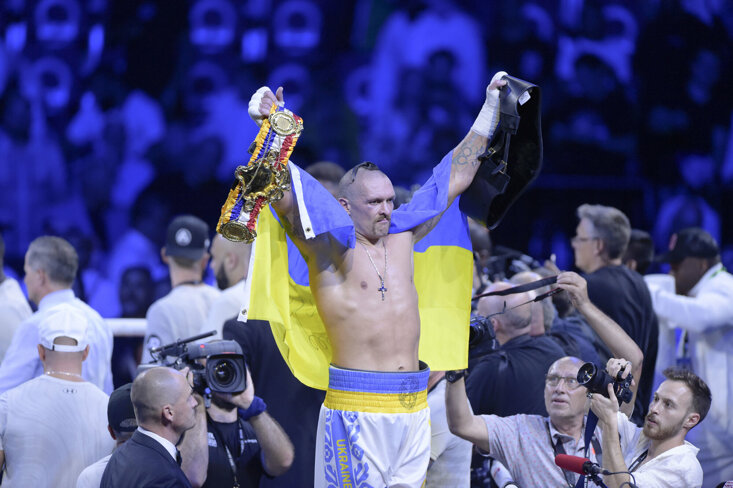 After knocking out Joseph Parker at the weekend, Joyce has emerged as a real contender to compete with the top dogs of the heavyweight division. 'The Juggernaut' called out Usyk after his fight with Parker but some feel he should fight Fury first.

Stephen Ruby Rogan said: “Joe Joyce would be the best fight for him. He can take a punch, unlike the other two, and he should be fighting for a big belt now. His style is good, let him fight.”

However, some feel that Joyce should take on Joshua first. Andrew Wright said: “I'd like to see Joshua fight Joyce, then the winner of that fight Fury after he's spanked Usyk.”

This battle is something British boxing fans have wanted for some time and it never came. While it would still generate interest, it won’t pack the same punch that it would have a few years ago and the drama surrounding this fight has been too much for some.

Andrew Wright said: “Joshua said he would sign a contract but didn't. 60-40 split and 50-50 for a rematch, what an unbelievable offer?

“No need for that to be ‘with the lawyers’. If he works his way back to mandatory challenger Joshua will only get 20%. Who needs a lawyer to work out the maths on that?”

And there are some who have lost interest thanks to all the theatrics.

James Freeman said: “The way things are going nobody is going to bloody care! It's so draining! Lennox Lewis would have beat them all this year and retired!

“But these clowns can't even get one fight over the line! It's embarrassing that the sport of boxing is almost dead! They are all boring!”

x
Suggested Searches:
The Sportsman
Manchester United
Liverpool
Manchester City
Premier League
More
boxing
On This Day In 2015: Tyson Fury Ends The Wladimir Klitschko...
Tyson Fury walks into Tottenham Hotspur Stadium this Saturday as a proven commodity. As he makes his [ ... ]
boxing
What Does Dillian Whyte Have Left? Controversial Win Leaves...
Whatever you thought of the decision, something wasn’t quite right about Dillian Whyte’s [ ... ]
boxing
Tyson Fury vs Derek Chisora III: Everything You Need To Know...
Tyson Fury puts his WBC heavyweight title on the line this weekend when he meets Derek Chisora in the [ ... ]
boxing
Gorman Vs Wardley Is A Throwback Fight Worthy Of The British...
On Saturday night, Fabio Wardley and Nathan Gorman will honour one of the great British boxing traditions. [ ... ]
boxing
Five Blows From The Body Snatcher: Dillian Whyte's Greatest...
Dillian Whyte will be looking to bounce back to winning ways this weekend when he takes on undefeated [ ... ]
boxing
Carl Froch Vs George Groves And Boxing's Great British Grudge...
Nine years ago today, Carl Froch and George Groves collided at the Manchester Arena, waging the first [ ... ]
boxing
Dalton Smith: 'Get A Couple Of Million And I'll Smack A YouTuber!'
Dalton Smith is a star on the rise. The Sheffield super lightweight has just made the first defence [ ... ]
boxing
Zach Parker Vs John Ryder: Everything You Need To Know
The WBO interim super-middleweight title is on the line at the O2 Arena this weekend in a fascinating [ ... ]
boxing
Dillian Whyte Vs Jermaine Franklin: Everything You Need To Know...
Heavyweight contender Dillian Whyte will be looking to bounce back to winning ways this weekend when [ ... ]
boxing
Gervonta 'Tank' Davis And Ryan Garcia Agree To Mouthwatering...
WBA ‘regular’ lightweight champion Gervonta Davis has agreed a fight with unbeaten contender [ ... ]
boxing
The Weekend Boxing Preview: European Titles, Unbeaten Superstars...
After a star-studded weekend where old stagers Ricky Hatton and Floyd Mayweather took part in exhibitions, [ ... ]
boxing
Martin Scorsese At 80: Celebrating Raging Bull, The Iconic 'Anti-Rocky'
“And though I'm no Olivier, if he fought Sugar Ray he would say that the thing ain't the [ ... ]
boxing
Why Dmitry Bivol Should Make 'Canelo' Come Back To 175 Pounds...
Saul ‘Canelo’ Alvarez has targeted a May return to the ring, after having surgery on his [ ... ]
boxing
Fury-Wilder 4 And Usyk-Hrgovic: The Heavyweight Fights Nobody...
Ask any boxing fan which heavyweight fight they would cherish above all others and you’d get the [ ... ]
boxing
The Panel: Should Women's Boxing Move To Three-Minute Rounds?
Welcome to The Panel, where we speak to a group of star names from across the fight game about the big [ ... ]
boxing
A Tale Of Two Exhibitions: Ricky Hatton And Floyd Mayweather...
On 8th December 2007, Floyd Mayweather defeated Ricky Hatton in Las Vegas, with the WBC and The Ring [ ... ]
boxing
Tommy Fury vs Paul Bamba Cancelled: Is Fury Unprofessional,...
Tommy Fury’s stock has never been lower. This weekend, when due to fight Paul Bamba, he weighed [ ... ]
boxing
Redemption Day: Natasha Jonas Clinches The Treble Against Marie-Eve...
A year ago, Natasha Jonas’ two most recent fights were a pair of failed attempts to win world [ ... ]
boxing
Chasing Gold: Conner Tudsbury Determined To Become A Mancunian...
There was something of a media circus the day Moss Side Fire Station Boxing Club opened its doors in [ ... ]
boxing
Haney-Lomachenko, Stevenson-Cruz And More Ordered At WBC Convention
The World Boxing Council hosted their 60th annual convention, in which they laid out plans and policy [ ... ]
boxing
'You Want Homer To Fight Tatum?!': 26 Years Of 'The Homer They...
It was a heavyweight title fight like no other. Watched by 9.7 million viewers on its initial airing [ ... ]
boxing
Back From The Brink: Natasha Jonas Has Gone From Nearly Girl...
A year ago, Natasha Jonas had failed to win her last two bouts. The decorated amateur had seemed nailed [ ... ]
boxing
This Is Hitman Heritage: The Very Best Of Ricky 'The Hitman'...
Ricky Hatton returns to the ring this Saturday in an exhibition bout against legendary three-weight [ ... ]
boxing
Ricky Hatton vs Marco Antonio Barrera: Everything You Need To...
British boxing legend Ricky Hatton returns to the ring this weekend for the first time in nearly a decade [ ... ]
boxing
Ricky Hatton On Fighting Barrera, Hitting Campbell With Body...
British boxing legend Ricky Hatton returns to the ring this weekend for the first time in a decade when [ ... ]
boxing
Sunny Edwards Vs Felix Alvarado: Everything You Need To Know...
Flyweight world champion Sunny Edwards defends his IBF title on Friday in Sheffield when he collides [ ... ]
boxing
Logan Paul's WWE Career Is The Perfect Antidote To Jake's Boxing...
Logan Paul woke up on Sunday morning with a torn meniscus, torn MCL and a potentially torn ACL. The [ ... ]
boxing
Floyd Mayweather Vs Deji: Everything You Need To Know
Floyd Mayweather’s post retirement exhibition tour continues this weekend and this time it is [ ... ]
boxing
'Canelo' Rematch Or Undisputed Glory? What Next For Dmitry Bivol?
WBA light heavyweight champion Dmitry Bivol was superb on Saturday night, elegantly out-boxing previously-unbeaten [ ... ]
boxing
Like Father, Like Son: The Mixed Fortunes Of Boxing's Paternal...
Campbell Hatton returns to the ring this Saturday in Abu Dhabi. The 21-year-old will face 9-5 Denis [ ... ]