Charles Leclerc overcame Max Verstappen at Red Bull’s home circuit to secure his first win in Formula One that didn’t come from pole position and his first P1 for three months. The fans roared on their favourite but Ferrari were far quicker on the day, and only an engine blow up near the end of the race prevented the Prancing Horse from bagging a one-two.

Many thought this would be a procession for Verstappen but instead Ferrari found huge speed on race day and nailed their pit strategy. There will be huge disappointment and worry around what happened to Carlos Sainz however, who was on the back of Verstappen before his engine completely gave way.

The Ferrari pace was so impressive that Sainz rapidly caught up with Verstappen and just as he looked to overtake the Red Bull driver, his car went up in smoke. The engine blew up and caught fire with the driver still inside but as it rolled back down the slip exit, the Spaniard managed to leap out.

After Zhou Guanyu’s horror crash at Silverstone last week, this was another scary reminder of the risks that these drivers take in the sport. Sainz was fine but frustrated as he returned to the pits, as Ferrari counted the cost of another reliability issue.

From the start, the midfield drivers provided huge drama. George Russell and Sergio Perez went side by side as the Mercedes and Red Bull collided to send the Mexican to the back of the pack. Mick Schumacher got past Lewis Hamilton so the Mercedes driver found himself behind two Haas cars yet again, while Leclerc managed to stay within DRS range of Verstappen.

That gave him the chance to overtake the Red Bull favourite on track and he dived down the inside to make the move stick. Verstappen dived into the pits for an early, before Hamilton made an epic double overtake on the Haas duo, in the space of a couple of corners.

Verstappen on hard tyres made his way back through the pack and even got past Hamilton to get back up to third. Then both Ferraris pitted and he was out in front again, before Leclerc reeled him in on fresh rubber.

Formula 1
@F1
CHARLES: “ It was a really good race. The pace was there. The end was incredibly difficult - I had this problem with the throttle but we managed to make it stick until the end. I'm so so happy."
#AustrianGP #F1 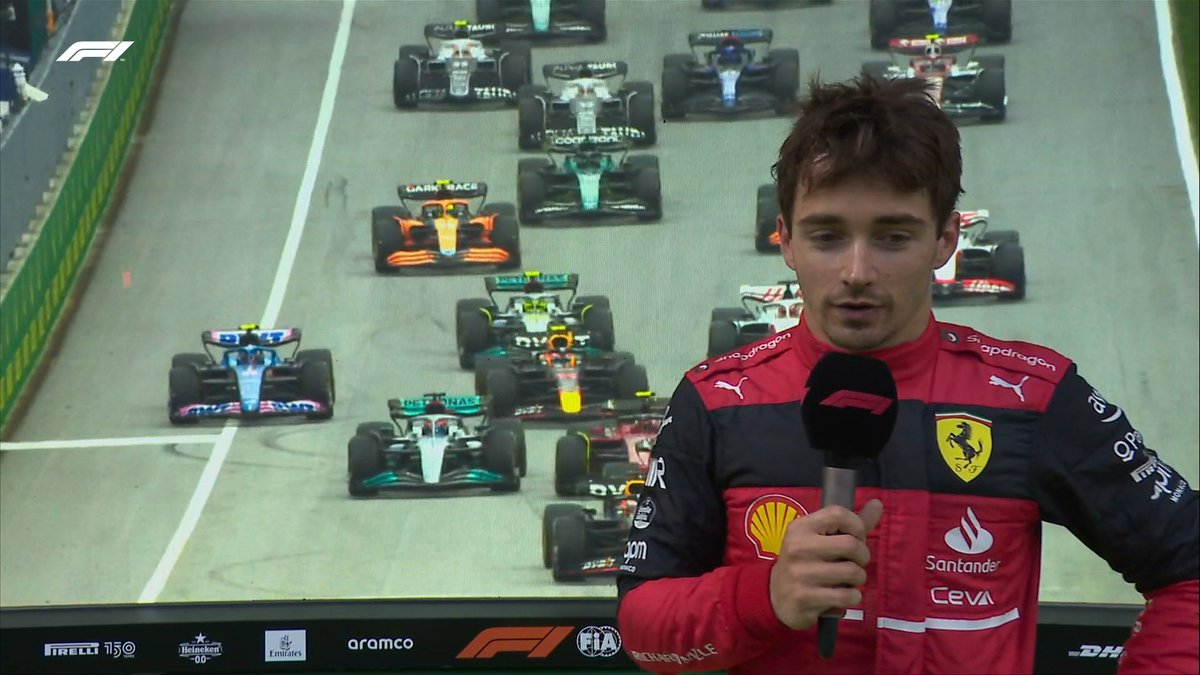 Ferrari looked to have the pace on track, and Leclerc was able to get past but the pit strategy meant that Verstappen was on older tyres attempting to hold off both Ferrarisi with 19 laps to go. Once again, Leclerc romped up to the back of him and cruised up the inside into turn three.

As Sainz approached Verstappen, Ferrari looked to be heading for a perfect weekend, but then the engine disaster struck and hands held heads in the pit lane, rather than being raised in celebration.

Leclerc was struggling with a throttle issue for the finale but he managed to hold off Verstappen to secure a huge win in the Drivers’ Championship. That was his first win that didn’t come from pole position and given that Verstappen bagged pole position and the sprint win, it was a significant moment at the halfway point of the season.

At Mercedes, Hamilton’s risk to switch onto the medium tyres early didn’t pay off as a result of the virtual safety car allowed Leclerc and Verstappen to pit onto the same compound but he came home in third, while Russell recovered from his early collision to finish fourth. Mercedes continue to pick up consistent points despite their previous issues and although they were a long way off the front two this weekend, it is another podium for Hamilton.

Next up is France, where Red Bull will be desperate to get back on top. Verstappen’s lead at the top of the Drivers’ Championship is still a healthy 38 points, but there is a long way to go.