An astonishing day of Olympic action unfolded in the Japanese capital as there were more golds for Team GB, a 400m hurdles world record and a successful return to action for Simone Biles. Here is how day 11 panned out in Tokyo.

Cycling great Jason Kenny won his eighth Olympic medal for Team GB with silver in the team sprint which makes him the most successful British Olympian of all time. He moves level with Sir Bradley Wiggins for the most Olympic medals while he and Sir Chris Hoy share the record for gold, which surely means a knighthood will be on the way.

This came after he watched his wife Laura take silver in the women’s team pursuit as both the men and women failed to hold onto their Olympic titles, losing to Germany and the Netherlands respectively. It was a day of ups and downs in the velodrome as Team GB’s men targeted a fourth successive team pursuit title but a huge crash in their heat with Denmark ended their hopes of a medal.

Team GB have always enjoyed success in sailing at the Olympics and this year was no different after a flurry of medals came in this morning. Giles Scott successfully defended his Finn title after Dylan Fletcher and Stuart Bithell won the men's 49er, while John Gimson and Anna Burnet secured silver in the mixed Nacra 17 class.

Scott’s race was the most dramatic as it looked as if he had fallen out of gold medal contention, before a late charge saw him secure fourth, when he needed to finish in the top five to secure gold. Great Britain have now won 13 golds and lie fifth in the medal table at the end of play. 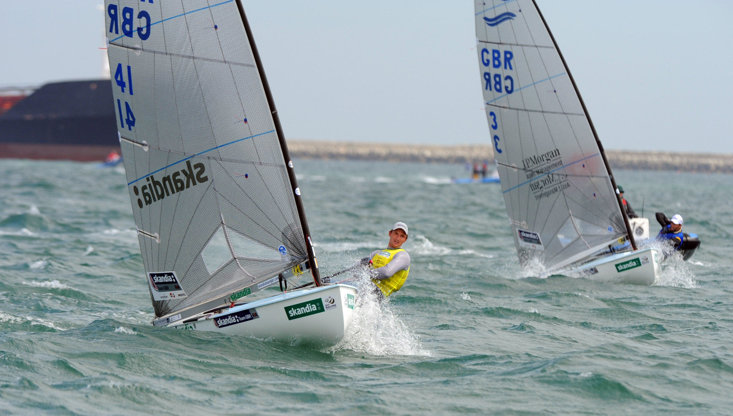 100m champion Elaine Thompson-Herah made it a double in Tokyo by recording the second fastest 200m of all time on her way to gold. A run of 21.53 was enough to win ahead of Namibia’s Christine Mboma, but it also means that the Jamaican has now won a double-double and defended both of the Olympic titles she won in Rio. If anyone is going to break Florence Griffith Joyner’s long-standng world records, it is going to be the fastest woman alive.

Karsten Warholm obliterated the world record to take gold in the most talented 400m hurdles final we have ever seen. He ran an unbelievable 45.94 seconds to take 0.76 of a second off his own world record, but he was pushed all the way by American Rai Benjamin, who broke the old world record but was heavily criticised by the champion for wearing Nike’s controversial super spikes.

19-year-old Keely Hodgkinson broke Kelly Holmes' British record set in 1995 by recording a personal best in the final to take silver. She began alongside fellow Brits Jemma Reekie and Alex Bell and it was Reekie who almost secured bronze, before fading in the final few metres. 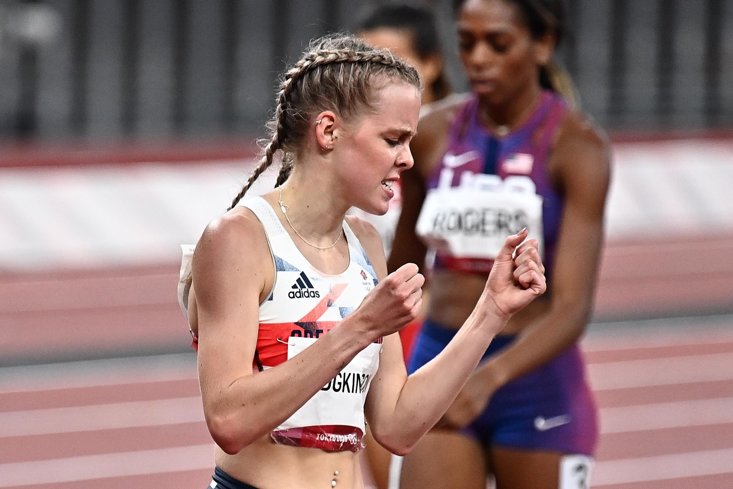 All three Brits ran personal bests however in a thrilling final that saw American teenager Athing Mu take gold. With two 19-year-olds on the top two steps of the podium, things are looking bright for the future of middle distance running.

Team GB’s Pat McCormack won a silver medal after losing a close men's welterweight contest to Cuba's Roniel Iglesias in Tokyo. In a unanimous points decision, Iglesias won his third Olympic medal agains the number one seed and at 32, is one of the most experienced amatuers in the world.

McCormack said after the defeat he is “ready for the professional ranks.”

Simone Biles returns with a bronze

One of the feel-good stories of the day came in the beam final as USA’s Simone Biles returned after her short break saw her prioritise her mental health. She returned to win a bronze medal to add to her collection to the delight of those in the arena.

China's Guan Chenchen won gold ahead of compatriot Tang Xijing, but it was the bronze medal winner who received the biggest cheer. "I didn't expect a medal today, I just wanted to go out there for me and that's what I did." Biles said. "I was proud of myself just to go out there after what I've been through."

There was also late drama in the men’s football semi-finals, which you can read about here.

x
Suggested Searches:
Manchester United
Liverpool
Manchester City
Marcus Rashford
Premier League
More
sports
How Elite Athletes Like Ronaldo And LeBron Have Adapted Their...
Cristiano Ronaldo’s goal for Manchester United in their 2-1 loss to Young Boys last night showed [ ... ]
sports
Teenage Kicks: Raducanu Joins Elite Group Of Top British Sporting...
Emma Raducanu stunned the world with her incredible US Open final win in straight sets over Leylah Fernandez. [ ... ]
sports
Enter The Dragon: Bryan Danielson Shakes Off ‘Daniel Bryan’
Daniel Bryan is dead. Long live ‘American Dragon’ Bryan Danielson. Whatever you know him [ ... ]
sports
The Shape Of Punk To Come: AEW Return To Chicago For All Out
AEW returns to pay-per-view with All Out on Sunday night, broadcasting live from the Now Arena in Chicago, [ ... ]
sports
Rebuilding Ric Flair: How Vince McMahon And Triple H Saved 'The...
‘Nature Boy’ Ric Flair returned home on Sunday night, when he made his return to the National [ ... ]
sports
The Superhuman Superstars Inspiring A New Generation At The...
The Paralympics are well underway and some of the most inspirational humans the world has to offer are [ ... ]
sports
From Undisputed To A Little Bit Of The Bubbly, Chris Jericho's...
Wrestling legend Chris Jericho will put his career on the line when he faces MJF at AEW All Out on 5th [ ... ]
sports
From Fireworks In France To Disco Demolitions: The Ugliest Conclusions...
Last night we saw the match between OCG Nice and Marseille abandoned as a result of disgraceful behaviour [ ... ]
sports
Many Happy Returns - Becky Lynch And Brock Lesnar Shake SummerSlam
‘Comeback’ was the key word at WWE Summerslam on Saturday night as over 50,000 fans at Allegiant [ ... ]
sports
Sports vs Videogames: When Tyson, Zlatan and LeBron Raged Against...
After a drawn-out legal dispute, Manchester United will be renamed ‘Manchester UFC’ on the [ ... ]
sports
From Ruthless Aggression To Out-Rapping The Rock, John Cena’s...
John Cena takes to the ring on Saturday in his first pay-per-view main event for over three years, when [ ... ]
sports
CM Punk Prepares To Return - Will He Drop Another ‘Pipe Bomb’?
While nothing is 100% sure in the world of pro wrestling, all credible indicators point to the fact [ ... ]
sports
WWE SummerSlam Brings Cena, Edge And More To Nevada
SummerSlam has traditionally been WWE’s second-biggest event of the year, below only WrestleMania [ ... ]
sports
Farewell Tokyo, Hello Paris! How Will Team GB Look At The 2024...
So the curtain has come down on Tokyo 2020 and although this was the ‘extended version’ [ ... ]
sports
Kenny's Keirin, Brown's Bronze & The Sportsman's Highlights...
The Tokyo 2020 Olympic Games might be over but they have left The Sportsman’s team with plenty [ ... ]
sports
Another Astonishing Olympics For Team GB - But Is This The Peak?
We didn’t know if it would even take place, but the sun has set on a Tokyo Olympics that has thrilled [ ... ]
sports
Day 14 Olympics Round-Up: Kenny Becomes First Female Brit To...
We are in the final straight of the spectacle that is Tokyo 2020 and while this great Olympics is drawing [ ... ]
sports
Mixed Events Are Here To Stay After Team GB's Tokyo Olympics...
Tokyo 2020 has seen the introduction of some new encapsulating mixed events that could be the future [ ... ]
sports
Italy Continue To Defy The Odds As Perfect Summer Continues...
There could be no such thing as the perfect summer of sport, but if there is, Italy are experiencing [ ... ]
sports
Day Ten Olympics Round-Up: GB Win Eventing Gold As Simone Biles...
Day 10 of Tokyo 2020 had plenty to offer as Team GB claimed another gold to add to their impressive [ ... ]
sports
Day Eight Olympics Round-Up: Relay Gold For Team GB Despite...
Team GB enjoyed more success on day eight of Tokyo 2020 as further history has been made in these historic [ ... ]
sports
From Dina To Daley, Here's What's In Store For Week Two At Tokyo...
The first week of Tokyo 2020 has been full of excitement and has produced some great entertainment. [ ... ]
sports
Day Five Olympics Round-Up: Mallory Franklin Takes Silver In...
Day six of Tokyo 2020 brought more excitement and Great Britain managed to pick up a few more medals [ ... ]
sports
From Raging Bull To Rudy, Ten Of The Greatest Sports Biopics...
This week saw the trailer drop for King Richard, a brand new biopic of Richard Williams, father [ ... ]
sports
Day Five Olympics Round-Up: GB Relay Team Storm To Gold & Dujardin...
Tokyo 2020 continues to thrill, with Great Britain collecting more medals on Wednesday and some high-profile [ ... ]
sports
Simone Biles Should Be Applauded For Her Withdrawal, Says Mental...
Simone Biles’ decision to withdraw from the all-around gymnastics final has been applauded by [ ... ]
sports
Day Four Olympics Round-Up: More Medals For Team GB In Best...
Great Britain has never had such a successful start to an Olympic Games. As day four comes to a close, [ ... ]
sports
Tokyo Olympics Day Three Round-Up: Team GB Enjoy A Magic Monday
It was a thrilling Monday for Team GB as the squad brought home five medals, including three golds, [ ... ]
sports
From Child Prodigy To Champion, Tom Daley Succeeds In Quest...
It has taken four Olympic Games, but Tom Daley finally claimed his first gold medal alongside Matty [ ... ]
sports
Tokyo Olympics Day Two Round-Up: Team GB Get Medal Tally Up...
There was finally some medal success for the Brits, a match to forget for the USA’s men’s [ ... ]