Football
News
The Dutch referee in charge of the Euro 2020 final is as accomplished as a businessman as he is on the pitch
Conor Keane
12:32, 09 Jul 2021

England will face Italy in Sunday’s Euro 2020 final at Wembley Stadium and the stakes have not been this high for the Three Lions since 1966. England’s biggest game in 55 years will be given to referee Bjorn Kuipers, who is not like your usual match official.

The Dutchman is a multi-millionaire, owning his hometown’s supermarket, hair salon and a number of other shops across the region. Dubbed ‘the world’s richest ref,’ the 48-year-old was estimated to be worth a whopping £11.5 million back in 2016.

Kuipers was born in Oldenzaal near the Germany border where his businesses are based. He is a franchise owner of the local Jumbo store, a well-known supermarket chain that operates across the Netherlands and Belgium. Named as Jumbo’s best franchisee in the Netherlands in 2016, the Dutchman is as accomplished as a businessman as he is a referee.

Kuipers took up business at university where he gained a degree in business administration from the Radbould University in Nijmegen. Following the completion of his degree he co-founded Jumbo – a sponsor of Formula 1’s Max Verstappen. However, he could not ignore the call of the whistle, which was in his blood - his grandfather, Andries van Leeuwen, was in charge of Tottenham Hotspurs’ Cup Winners’ Cup victory over Atletico Madrid in 1963.

He made his professional bow as a referee in 2002 before he was elevated to the Eredivisie three years later. FIFA called upon the Dutchman to be added to their international list in 2006 and he has taken charge of some big events, so he will not be in unfamiliar territory on Sunday, with the 2013 and 2018 Europa League finals and the 2014 Champions League final on his CV. 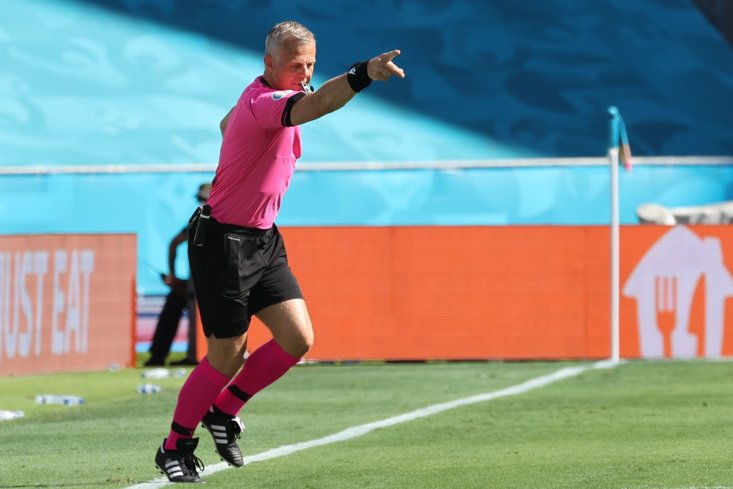 The 48-year-old took charge of England’s World Cup quarter-final victory over Sweden three years ago and Gareth Southgate will be hoping for the same fortune against the Azzurri on Sunday. He also took charge of the England U20s game in 2017, where they defeated Venezuela to win the U20s World Cup – where current Three Lions member Dominic Calvert-Lewin scored the winner.

It will be interesting to see what exchange is given between Kuipers and Italy’s Marco Verratti following the claim that the official said ‘f*** you’ to the PSG man during their Champions League semi-final first leg loss to Manchester City, where the Dutchman awarded a red card to Verratti’s teammate Ángel Di María. Italy had the referee also oversee their 3-0 drubbing by Spain in the 2018 World Cup qualifiers.

So far at Euro 2020, Kuipers has overseen Denmark’s loss to Belgium and their victory over Czech Republic. He also took charge in Spain’s 5-0 thrashing over Slovakia.

The mega-rich ref has certainly got the pedigree to be given the reins for such a prestigious fixture and it will be another grand fixture to add to his already impressive CV.