You have to go back to March 2019 for the last time that Germany came out on top against an outfit ranked inside FIFA’s top 20 nations.

That 3-2 Amsterdam victory over the Netherlands came from a 90th minute Nico Schulz strike in their qualifying group for this summer’s tournament, but it is one of very few positive results against the so-called big boys of international football.

Joachim Low’s legacy as manager of Die Mannschaft is, quite rightly, beyond question. He led them to glory in the 2014 World Cup in a run that saw them dispatch of the great Brazil by a 7-1 scoreline in the semi-finals Any manager that wins the World Cup automatically gains legendary status in that nation, but let’s not forget that Low also led Germany to the final in Euro 2008, as well as runs to the semi-final in the 2010 World Cup, Euro 2012 and Euro 2016.

All great national sides, see Spain and France following their World Cup and European Championship triumphs, suffer something of a lull after periods of success. Germany have been no different. In 2018, they were eliminated in the group stage of a World Cup for the first time since 1938 after suffering humiliating defeats to Mexico and South Korea.

A proud footballing nation will take confidence from the fact that Low’s side topped their qualifying group for this summer, narrowly pipping the Netherlands to the summit of Group A, however, with Northern Ireland, Estonia and Belarus making up the remainder of the group, anything shy of reaching the finals would have been deemed as catastrophic.

As the old saying goes, you can only beat what is put in front of you, and Germany’s reward for reaching Euro 2020 was a group alongside reigning champions Portugal, world champions France, and a Hungary outfit that aren’t shy of an upset. In order to avoid a group stage exit in two consecutive tournaments, the three-time European champions knew they would likely have to pick up a positive result against either France or Portugal before dispatching of Hungary in their final group game.

The first opportunity to do just that has been and gone, with France barely getting out of second gear in their 1-0 victory over Low’s side in Munich of all places. 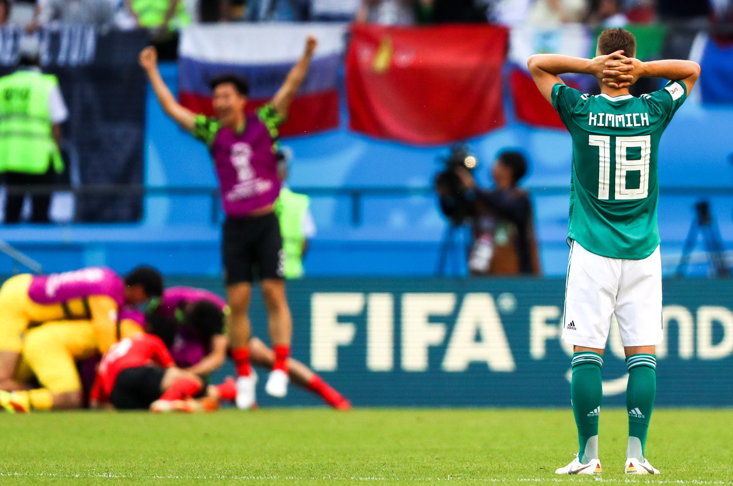 Germany exited the World Cup at the group stage in 2018

Germany need to find a way to get a result against a fellow powerhouse, with that 3-2 victory over the Dutch their only competitive win over 90 minutes against a top-15 ranked nation since winning the World Cup some seven years ago. That's a stat that will need to change.

There have been plenty of opportunities to put that record to bed, with the crushing 6-0 defeat at the hands of Spain as recently as last November still fresh in the memory. Keep in mind that Spain are far from the force of old, and Manchester City’s Ferran Torres helped himself to a hat-trick against a hapless German defence, and their problems really do stare you straight in the face.

From a Germany perspective, the less said about their March 2-1 home defeat to a North Macedonia outfit that look likely to face elimination from the Euros without picking up a single point, the better.

In the last three years alone, the Netherlands have beaten Low’s men twice, while France have now also done the double over them with that group opening victory coming after Didier Deschamps’ men ran out 2-1 winners in a 2018 UEFA Nations League encounter.

Betfred make Germany the strong favourites to come out on top in Saturday’s clash with a Portugal side who left it late to see off Hungary with three unanswered goals. The fact that Cristiano Ronaldo helped himself to two goals won’t make for pleasant reading in Germany, and you get the feeling that captain Manuel Neuer will have to be at his best to prevent the reigning champs from booking their spot in the last 16 - perhaps at the expense of the Germans.