All eyes were focused on the duel between Norway’s Viktor Hovland and Northern Ireland’s Rory McIlroy on a superb Saturday of action at the 150th Open Championship.

The first birdie of the day went to Kevin Kisner, grabbing one on the first to kickstart on what was the performance of the day, shooting a 65, with the closest to him being Rory McIlroy with a 66. After starting the day at even par, that saw him finish tied 13th for the day at -7.

Other highlights of the morning saw LIV Golf’s Bryson DeChambeau start positively, grabbing an eagle on the ninth which he later nullified with a double bogey on the 16th. Regardless, a 67 for ‘The Scientist’ was positive and he finished on -5 for the day, -6 for the week. He wasn’t the only LIV Golf player attracting attention on Saturday either.

Dustin Johnson, although not in form worthy of sitting atop the standings, performed admirably as he battled the greens at St Andrews. Starting the day on -9, he worked hard to find his place in the top five with three birdies on the front nine. Unfortunately, he scuppered his own success with three birdies on holes 13, 14 and 16, including overshooting the green entirely with a seemingly simple pitch. Alas, a birdie on 18 kept him under par for the day, and he is seventh going into the final day of action.

The main event remained Rory McIlroy, hotly tipped throughout the build-up of the tournament to make his mark and be amongst the top of the leaderboard on Sunday afternoon. An incredible chip-in eagle on hole 10 saw a loud reaction that was more Old Firm than Old Course, and that moved him to 15 under alongside fellow European and then-leader, Viktor Hovland. 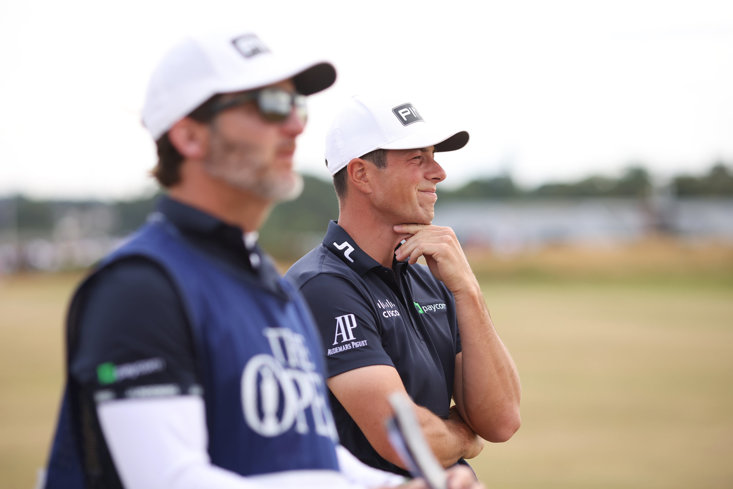 Norway's Viktor Hovland eyes up his second shot on the fourth hole.

McIlroy and Hovland were paired together and will continue to be on Sunday, with the pair exchanging birdies and eagles in an epic battle to hold the top berth going into the championship day.

Despite leading the Norwegian on -16, a bogey on 17 put McIlroy back level going into the final hole, in which the pair both earned birdies after reaching the green in one on the final par four.

Just below them in the table was day one’s leader, Cameron Young, partnered with Aussie Cameron Smith. Young impressed previously and mustered up a -1 for the day , but his partner will be less than impressed. Smith, known for his accurate short game, had a bit of a nightmare round, opening the round with a bogey, and ruining his day further with a double bogey on 13, after finding bunkers and bushes on his pursuit of the green. He finished +1 but remains tied third.

He sits -11 for the week, alongside world number one Scottie Scheffler. Four birdies and a bogey on the 12th hole saw Scheffler move up to 5th for the weekend. With his excellent performances so far this year, don’t be surprised to see Scottie attempting to claw his way to the top of the leaderboard on Sunday.

Also worth a shoutout is Tommy Fleetwood, Trey Mullinax and Francesco Molinari. The Englishman, American and Italian walked into the clubhouse after shooting rounds of 66, the second best of the day behind Kevin Kisner. Fleetwood, a clear fan favourite and supporter of The Open, ended up the highest of the three, sitting 7th by the end of the day.

Going into Sunday, Rory McIlroy remains the favourite, priced at 9/10 with Betfred. Viktor Hovland sits at 15/8, ahead of the Cameron’s, Smith 9/1 and Young 14/1.

x
Suggested Searches:
The Sportsman
Manchester United
Liverpool
Manchester City
Premier League
More
golf
Luke Donald Confirmed As Europe's Captain For 2023 Ryder Cup
Luke Donald has been named Europe’s Ryder Cup captain, replacing Henrik Stenson who was sacked [ ... ]
golf
LIV Golf: The Players Who've Made The Switch And Those Who Haven't
LIV Golf arrived into the world of golf with a whimper, followed by a bang. After initial sniggers from [ ... ]
golf
Cameron Smith Refuses To Rule Out LIV Golf After Open Victory...
Cameron Smith had one of the comebacks of the year on Sunday at St Andrews, going -8 under par for the [ ... ]
golf
Cameron Smith Wins The 150th Open Championship On Dramatic Final...
Cameron Smith has won The 150th Open Championship after a nail-biting finale at St Andrews. The title [ ... ]
golf
Tiger's Farewell Tears And Smith's Putting: Day Two At The Open...
Three-time champion Tiger Woods was left in tears at the end of his round on day two, in what he thinks [ ... ]
golf
McIlroy's Promising Start And Tiger Tees Off: Day One At The...
Rory McIlroy enjoyed almost the perfect opening round to his Open. The 2014 Champion Golfer of the Year [ ... ]
golf
WATCH: Ian Poulter's Extraordinary 160-Foot Putt On The Ninth...
Ian Poulter might have already made one of the putts of the tournament at the 150th Open Championship as [ ... ]
golf
Easy Tiger: The Top Five Open Championship Wins At The Old Course
Snead. Nicklaus. Woods. All of the greats have lifted the Claret Jug outside the famous Royal & [ ... ]
golf
The 150th Open Championship: A Guide For The Old Course
It’s game week and the 150th Open Championship is underway with practice rounds for the greatest [ ... ]
golf
Tiger Woods Says LIV Golf Defectors ''Have Turned Their Backs''...
Tiger Woods has waded into the PGA Tour’s feud with the controversial LIV Golf Series to reiterate his [ ... ]
golf
The 150th Open Championship: McIlroy Favourite As Golf Returns...
Words fail to describe the beauty of Scottish links golf. Greens the size of islands, filled with twists [ ... ]
golf
The Open Championship's Prize Pot Increases By 22 Per Cent
The winner of the 150th Open at St Andrews next week will receive a championship-record £2 [ ... ]
golf
Bryson DeChambeau Hopes People Can See The 'Good' Saudis Are...
LIV Golf star Bryson DeChambeau has said that he wants people to see the ‘good’ that Saudi [ ... ]
golf
The DP World Tour Bans LIV Golf Players From The Scottish Open
The DP World Tour has handed out £100,000 fines to all the players who competed in June’s [ ... ]
golf
R&A Confirms LIV Golf Series Stars Will Be Invited To The Open...
The Royal & Ancient Golf Club has confirmed that players signed up to the LIV Golf Series will be [ ... ]
golf
US Open Preview: European Stars Can Dominate The Top Ten
After weeks of folie à deux in the world of golf, the world’s finest players return to [ ... ]
golf
Rory McIlroy And Linn Grant Weekend Wins Overshadow LIV Golf...
The inaugural LIV Golf event at London’s Centurion Club was left in the dust on Sunday thanks [ ... ]
golf
The Troublesome Timeline Of LIV Golf: How Did We Get Here?
The most controversial topic in sport right now, the LIV Golf tournament, teed off on Thursday after [ ... ]
golf
Dustin Johnson's Defection Could Change Not Just Golf But Sport...
To call Dustin Johnson’s withdrawal from the PGA Tour on Tuesday “seismic” would be [ ... ]
golf
Everything You Need To Know About The 2022 PGA Championship
‘This is Major’ is the PGA’s chosen slogan for their flagship major event, as the [ ... ]
golf
Betfred Donate £19,000 To Prostate Cancer UK After Danny Willett...
Thorbjørn Olesen may have walked away with the Betfred British Masters title over the weekend, [ ... ]
golf
Betfred British Masters: Thorbjorn Olesen Triumphs With Spectacular...
Thorbjorn Olesen clinched the Betfred British Masters title with an incredible 35-foot putt on the 18th [ ... ]
golf
Thorbjorn Olesen Three Clear Heading Into Final Day Of Betfred...
Following a miserably wet Friday, the sunshine returned to The Belfry on Saturday as round three of [ ... ]
golf
Hurly Long And Danny Willett Shine On Day Two At Betfred British...
It was another action-packed day at The Belfry in Sutton Coldfield for day two of the Betfred British [ ... ]
golf
Great Danes Enjoy Profitable Opening Day At Betfred British...
If watching Christian Eriksen run the show in the Premier League wasn’t enough, now several other [ ... ]
golf
Everything You Need To Know About The Betfred British Masters
The British Masters is upon us and Danny Willett has chosen The Belfry again as the host for one of [ ... ]
golf
Phil Mickelson Plays Both Sides As Golf’s Civil War Begins
Phil Mickelson, American golf hero and people’s champion left many fans flabbergasted by [ ... ]
golf
Lazarus With A Five Iron: Tiger Roars Back At The Masters On...
On April 14 2019, the weather was looming ominously in Augusta, Georgia. The only thunder that ultimately [ ... ]
golf
Scheffler Shines, Rory Reborn & Tiger Returns: 5 Things We Learned...
Scottie Scheffler's stunning season continued this weekend as he clinched the first major of his [ ... ]
golf
Tiger’s Greatest Triumphs: Three Times Woods Defied All The...
You simply couldn’t write the life of Tiger Woods. A man that has seen it all, won the lot and [ ... ]