Us Sports
News
The first game of the best-of-seven series between the Bucks and the Suns gets underway on Tuesday night
Kieran Spratt
14:05, 06 Jul 2021

And then there were two. This week sees the Milwaukee Bucks and the Phoenix Suns kick off their best-of-seven series to determine who will be lifting the Larry O’Brien Championship Trophy this season.

You’d be hard-pressed to find anyone who would have picked these two teams specifically to reach the Finals a month ago but both outfits are thoroughly deserving of their place in the NBA’s showpiece event. The Bucks had to overcome a tough Atlanta Hawks with a 4-2 series win in the Eastern Conference Finals, while the Suns beat the Los Angeles Clippers by the same scoreline in the Western.

Regardless of the outcome, a little slice of history will be made on the court this month whoever wins. The Suns are making their first appearance in the Finals since 1993, where they were led by regular season MVP Charles Barkley but were ultimately defeated 4-2 by Michael Jordan and the Chicago Bulls. The Bucks, on the other hand, have had to wait even longer, last appearing in the Finals in 1974 where they were beaten by the Boston Celtics by four games to three. Unlike the Suns however, the Bucks actually lifted the title in 1971, when they were led by the great Kareem Abdul-Jabbar.

The two teams that will go head-to-head in the Finals this season are hardly a rivalry on the same level as, say the LA Lakers vs the Celtics, but they do share a history of sorts - particularly around the aforementioned Abdul-Jabbar, one of the greatest stars to ever grace the sport.

In 1969, two years before he led the Bucks to the 1971 Championship, the Suns lost out on a chance to draft Abdul-Jabbar after losing a coin toss with the Minnesota franchise. One has to wonder whether the Bucks would be carrying that sole Championship win going into game one on Tuesday night, had they not been so lucky with the flip of a dime. There’s no Abdul-Jabbar this time around, of course, but each of these sides have their own stars looking to cement their names into NBA history.

For the Bucks, Giannis Antetokounmpo has been absolutely crucial to their success this season. In the two games the Bucks have played against the Suns this season, the 26-year-old scored 80 total points with a 68.2 true shooting percentage. 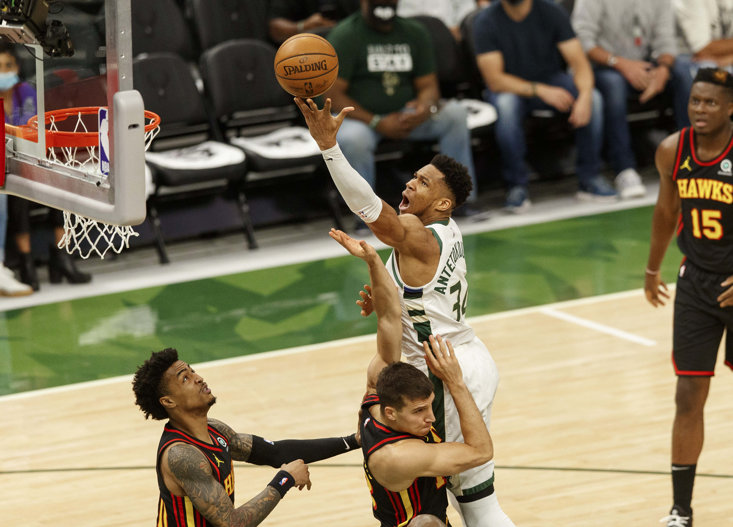 Antetokounmpo left the court in game four against the Hawks after suffering from a hyperextended left knee and remains a doubt for the first game of the Finals - but when he returns, the Suns will need to find answers on how to keep him quiet.

Meanwhile for the Suns, Chris Paul, who until recently had the most post-season starts without a Finals appearance (123), is one of the best point guards in recent memory and a shoo-in to make the Hall of Fame. Paul’s command of the floor is unrivaled and the battle between him and Bucks’ Jrue Holiday will be a fascinating battle across the series.

Nobody could have expected seeing these two sides in the Finals but the showdown between Bucks and Suns is balanced on a knife-edge. This could be one of the most compelling and fascinating Finals’ match-ups in a long time.

x
Suggested Searches:
Manchester United
Liverpool
Manchester City
Marcus Rashford
Premier League
More
us-sports
NBA Eastern Conference: Nets Face Early Obstacles As Bucks Eye...
The Eastern Conference is always astounding. Whether it’s Cleveland disrupting Golden State after [ ... ]
us-sports
NBA Western Conference: Lakers Looking For A Dynasty?
The NBA returns to our screens next Tuesday night/Wednesday morning, with the curtain-raiser for the [ ... ]
us-sports
The Moments That Cemented David Stern’s Legacy As The NBA's...
The late David Stern moulded the NBA into what it is today, dealing with some of the NBA’s incredible [ ... ]
us-sports
Everything You Need To Know About The Opening Weekend Of The...
The NFL season gets underway this week and the road to Super Bowl LVI starts now.  32 teams will [ ... ]
us-sports
Untold: Malice At The Palace Is Netflix’s Best Sports Doc Since...
It feels like a lifetime since those early days of the pandemic when many of us became completely obsessed [ ... ]
us-sports
NBA Draft 2021: The Trades And Stars Of The Future To Watch
Every year, America shows the world how the next-generation of athletes can be wedged into the top-flight [ ... ]
us-sports
“Special Leader” Antetokounmpo Inspires Bucks To First NBA Title...
Giannis Antetokounmpo scored 50 points as the Milwaukee Bucks secured their first NBA title since 1971 [ ... ]
us-sports
Fear The Deer: Giannis’s Milwaukee Bucks One Win Away From NBA...
The year was 1971. Disney World has opened its doors to the world. Sean Connery returned to the Bond [ ... ]
us-sports
Giannis Antetokounmpo's Incredible Block Helps Bucks Tie Up...
Sir Alex Ferguson summed it up best when he said “Attack wins you games, defence wins you [ ... ]
us-sports
50 Years After Only NBA Title Win, The Milwaukee Bucks Are On...
The Milwaukee Bucks moved to within one game of their first NBA Finals appearance since 1974 with a [ ... ]
us-sports
Suns' Return To NBA Finals After 28 Years Will Be Their Best...
The Phoenix Suns are in the NBA Finals for the first time since 1993 after finishing off a 4-2 West [ ... ]
us-sports
LA Clippers Beat Phoenix Suns 116-102 To Keep Their NBA Finals...
The Los Angeles Clippers kept their hopes of a first ever NBA finals appearance alive with a 116-102 [ ... ]
us-sports
Khris Middleton Shines As Milwaukee Bucks Take 2-1 Series Lead...
Khris Middleton netted 20 fourth quarter points to turn game three on its head and lead the charge as [ ... ]
us-sports
NBA Conference Finals: Phoenix Suns To Continue Hot Streak Against...
Last season’s Disney-hosted NBA Playoffs are firmly in the rear-view mirror as this season’s [ ... ]
us-sports
Kevin Durant Display Against Bucks Cements His Place As An All-Time...
“GREATNESS,” wrote LeBron James on Twitter in the aftermath of the Brooklyn Nets’ [ ... ]
us-sports
MVP Nikola Jokic Ejected As Phoenix Suns Reach Western Conference...
They have been waiting for over a decade, but the Phoenix Suns have finally reached the Western Conference [ ... ]
us-sports
Once Second-Best To Taco Bell, Nikola Jokic Is Now The Very...
Nikola Jokic’s rise to the summit of the NBA has been like no other. The Serbian has now joined [ ... ]
us-sports
Has Father Time Finally Caught Up With LeBron James?
All great athletes have an expiry date. Muhammad Ali broke the hearts of millions as he was retired [ ... ]
us-sports
On This Day, Michael Jordan's Chicago Bulls Humiliate Utah Jazz...
The greatest defensive game of all time? Quite possibly. On this day in 1998 Chicago Bulls put on an [ ... ]
us-sports
NBA Playoffs: Lakers On The Verge Of Elimination As Jazz And...
The Los Angeles Lakers need to win the final two games of their NBA Playoff First Round series [ ... ]
us-sports
Baseball Passes Two Million Runs, But Nobody Seems To Know When!
A baseball milestone was reached on Friday night. The same landmark was hit on Saturday. And it won’t [ ... ]
us-sports
Thursday's NBA Playoffs: Your Full Guide To The First Round...
The NBA playoffs are now very much in full swing as the Los Angeles Lakers fight it out with 15 other [ ... ]
us-sports
Aaron Rodgers Destined To Leave Packers As Relationship Reaches...
He’s a three-time MVP adored by his fan base, the face of the franchise in the modern era and [ ... ]
us-sports
NBA Playoffs: Your Game-By-Game Guide To Saturday's First Round...
Following a thrilling inaugural play-in tournament, NBA’s playoffs get into full swing on Saturday [ ... ]
us-sports
Turnbull No-Hitter Puts MLB Well On Course To Smash All-Time...
It would appear that 2021 is Major League Baseball’s ‘Year of the No-Hitter’. Detroit [ ... ]
us-sports
NBA Champion Lakers Host Warriors In Thrilling New One-Game...
The Los Angeles Lakers host the Golden State Warriors in a one-game head-to-head to qualify for the [ ... ]
us-sports
Brady's Buccaneers To Host The Cowboys in Week 1 Of The New...
Defending Super Bowl champions the Tampa Bay Buccaneers will begin their 2021 NFL season by hosting [ ... ]
us-sports
Utah Jazz Face Big Test Against LA Lakers In Surprise Bid For...
The Utah Jazz are the ultimate mid-level NBA team. They had great success in the nineties due to the [ ... ]
us-sports
Better Than Jordan, Tiger And Messi? Nobody Has Dominated A...
It was meant to be Tom Brady versus Patrick Mahomes. In the end, we just had further proof that the [ ... ]
us-sports
7 Up For Brady As His Super Bowl Masterclass Humbles Mahomes...
Tom Brady has done it again. The greatest quarterback in the history of the game won his seventh Super [ ... ]