Lewis Hamilton will attempt to make history this weekend when he bids to win a record sixth British Grand Prix, a tally no driver has ever accumulated.

Hamilton, who has registered five triumphs alongside Jim Clark and Alain Prost, is one of only a dozen British racers to win their home Grand Prix, six of whom triumphed on multiple occasions.

Before the likes of Hamilton, Clark, Nigel Mansell, and Jackie Stewart reigned supreme at the British Grand Prix, Stirling Moss - who was knighted in 2000 - became the first British racer to win the race, a feat he achieved 64 years ago (1955) in front of 150,000 spectators at a sun-drenched Aintree; the Liverpool circuit more famous for the Grand National. It was the first time Aintree staged the event and it proved to be a successful stomping ground for Moss.

The home favourite - 25-years-old at the time - was one of the favourites for glory in 1955, alongside his Mercédès-Benz teammate Juan Manuel Fangio, who was the defending Formula One World Champion. The duo dominated proceedings, and even lapped Cooper driver J. Brabham early doors, while they would share the lead from the first lap to the 90th, 80 of which were led by Moss.

“Both sat in their cars with the comfortable ease of chauffeurs driving to a wedding,” described The Guardian’s racing correspondent at the time.

As the pair roared around the last corner of the final lap Fangio appeared destined to overtake his teammate and grab the spoils, yet the move never materialised and it was history-making Moss who zoomed past the chequered flag first, two-tenths ahead.

Mercédès dominance was such that each of their four drivers finished in the top-four, with German Karl Kling and Italian Piero Taruffi coming 3rd and 4th respectively.

Stirling later revealed: “I asked him [Fangio] afterwards did you gift it to me?”

A mark of respect, a sporting gesture, or maybe even a team order? Moss has always remained suspicious, although Fangio, who died in 1995, repeatedly insisted his teammate won fair and square.

Although in the immediate aftermath of the race, a report from The Times stated that Moss informed the crowd:

“Fangio, the greatest driver in the world, could easily have come up and made a different story of the race, but being the sportsman he is, Fangio had given him the opportunity of realizing his ambition to win the Grand Prix." 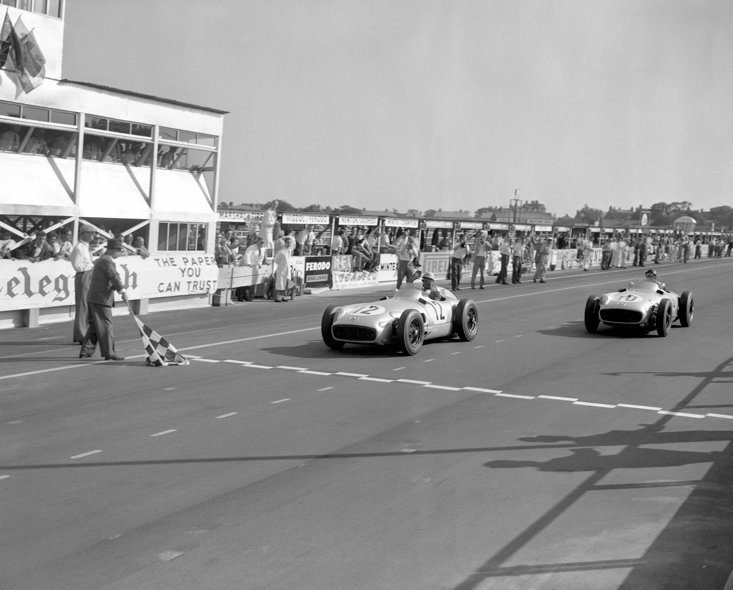 Fangio returned to win the British Grand Prix the following year, when the race was held at Silverstone. Defending champion Moss retired on the 94th lap, however the Englishman would grab his second victory in 1957 when the race returned to Aintree, a victory he shared alongside Vanwall teammate Tony Brooks: it was the first time a British car had a world championship race.

Moss, a 16-time Grand Prix winner, is widely considered to be one of the best all-round drivers ever, but he never managed to win the world championship. As a result, he’s a permanent presence in the ‘greatest to never win a world championship’ debates. He would finish runner-up in four straight seasons between 1955 and 1958, then third in the subsequent three seasons. Heartbreaking.

This weekend marks the 64th year since Moss became the first Briton to win the British Grand Prix, yet he remains one of the most iconic British racing drivers of all time.