Motorsport
News
Here we fill in the gap between race weekends by keeping you up to date with the latest developments from the world of Formula One
Steven Allen
09:05, 17 Apr 2022

Welcome to The Pit Stop, a new column from The Sportsman filling the gap between race weekends by keeping you up to date on the latest developments from the world of Formula One.

Last weekend we saw Charles Leclerc cruise to victory in Melbourne to continue his domination at the top of the World Drivers’ Championship standings. Ferrari still sit atop the Constructors’ Championships despite Carlos Sainz crashing out early in the Grand Prix.

Next up is Emilia-Romagna Grand Prix on the outskirts of Bologna at the famous Autdromo Internazionale Enzo e Dino Ferrari, or Imola as it’s better known. Until then, we have some updates from the world of F1 to look at.

Following Russia's invasion of Ukraine, global sanctions were dished out to many Russian-owned companies around the world, including Haas’ title sponsor going into the 2022 season, Uralkali. Images circulated at the time of the team scraping the sponsor’s logo off of the equipment and trucks, and the departure of Russian driver and son of the Uralkali owner, Nikita Mazepin, was announced shortly after.

Following this, Uralkali has requested a refund of the £9m it had given to Haas ahead of the 2022 season. In response, the American team has not only rejected the request of the Russian fertiliser company, but are also claiming a further £6.6m in compensation for a reported “loss of profits”.

If that wasn’t a big enough ‘Uno Reverse’ card for Haas, they also insist that until the compensation is handed over, they will refuse to adhere to a clause in Mazepin’s contract that promised him one of his 2021 cars, despite his best efforts to destroy them throughout the season.

Nikita Mazepin will also not be paid for any of his work so far this season up until his sacking. The Italian authorities have also seized $150 million worth of assets belonging to the 23-year-old including his $114 million estate.

The Monaco Grand Prix is a staple of the Formula One season. Taking the trip to the Cote D’Azur to see one of the wealthiest places in the world, with affluence oozing out of every corner.

Some rumours were spreading recently about the Monaco Grand Prix perhaps being replaced on the circuit, with reasons cited such as the track being too narrow for the new generation of cars and that the financial demands by Formula One to hold it there were too expensive for the track’s overseers. The booming popularity of the sport has seen Belgium, France, Monaco and Mexico all be put on alert by the addition of more US-based Grand Prix, with all four of those tracks in their final year of their contracts.

However, all has been put to bed by Automobile Club de Monaco president, Michel Boeri, who spoke to French car magazine, Auto Hebdo.

“It was suggested Liberty Media’s demands were too excessive for Monaco and the Grand Prix would no longer be held,”

“That’s not true. We are still in talks with them and we must now make it concrete by signing a contract. I can guarantee you that after 2022, the GP will continue to take place.”

Reigning F1 Drivers’ champion Max Verstappen was critical of the Aston Martin safety car at the Australian GP, comparing it to a turtle after failing to keep temperature in his tyres due to low speed.

“Unbelievable, with that car, to drive 140kmh on the back straight where there was not a damaged car anymore, I don’t understand why we have to drive so slowly.” said the Dutchman.

The evidence of cold tyres was there for all to see, as eventual winner Charles Leclerc suffered understeer out of the final corner as the race was green lit again.

“We have to investigate. For sure, the Mercedes Safety Car is faster because of the extra aero. The Aston Martin is really slow. It definitely needs more grip because our tyres were stone cold.”

The FIA have responded to the criticism of their safety car procedures, citing safety of those on the track being prioritised over the speeds of the cars, as well as saying that ‘Race Control’ dictates the speed of the cars on the track during yellow flag conditions. 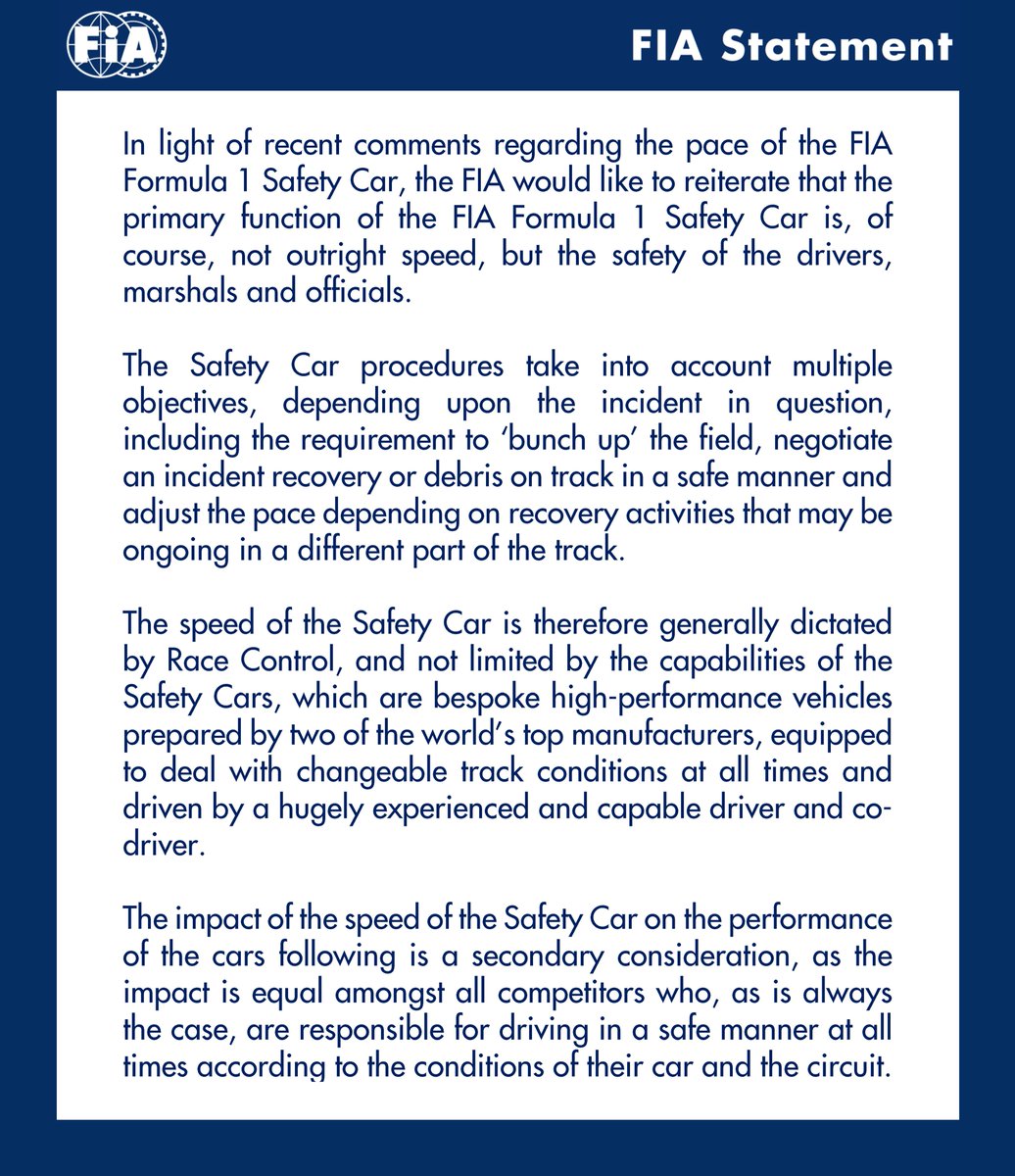 Fernando Alonso’s ‘El Plan’ isn’t really coming off like he said it would. Since revealing his mysterious modus operandi at the 2021 Turkish GP, he’s found the podium just once alongside four points finishes.

Something that wasn’t part of ‘El Plan’, was crashing out last weekend at Albert Park. Alpine’s veteran Team Principal, Otmar Szafnauer revealed what the issue was that caused the A522 to find the wall, and it was down to a faulty o-ring on the oil seal.

“The o-ring threaded, the oil leaked out. We have a failsafe mode that tried to save the engine, so when you see a drop in oil pressure, the failsafe mode kicks in and that’s what happened.”

Spanish news outlet Marca confirmed that the part that was at fault was available for an estimated €2. This isn’t Alonso’s first rodeo either. He was retired from the 2021 Bahrain GP due to a sandwich bag getting stuck in the rear brake duct, causing terminal overheating.

Despite this unfortunate retirement, Alonso was on course to get pole position in Melbourne last Sunday until Nicholas Latifi and Lance Stroll collided on their way back to the pits.

Aston Martin’s AM19 car is already looking like an expensive gamble for Lawrence Stroll, and the price is only getting higher as Team Principal Mike Krack revealed.

Last weekend both Sebastian Vettel and Lance Stroll damaged their cars, with the German former champion having a heavy crash in Practice One, before Stroll collided with fellow countryman Nicholas Latifi after he failed to spot the latter driver overtaking him on the inside.

“We had a very difficult weekend because we had a lot of car damage.” he said to Motorsport.com.

After commenting on problems throughout the weekend, Krack told reporters that developments to the AM19 will be difficult due to the amount of action the car is seeing.

“I am quite sure you counted the amount of incidents and the amount of wings and front suspensions that we have damaged. So you can calculate quickly how many we will need to go to Imola, and actually yes, the question is correct.

“Will we have capacity to develop, or will we need to use our capacity for making spares? So these discussions are ongoing.”

The season looks bleak so far for Aston Martin, who are yet to finish inside the top ten and with Sebastian Vettel only just returning after contracting COVID-19.