We’re six months into the year and so far we’ve witnessed the heavyweight picture heat up to a level we haven’t seen in a while. The top five of the division is made up of some of the UFC's most technical fighters, despite the reputation around heavyweights only being heavy hitters.

Jairzinho ‘Bigi Boy’ Rozenstruik is the latest fighter looking to prove his worth against heavyweight gatekeeper Alexander ‘Drago’ Volkov at the UFC Apex, after mixed results in his last few fights.

How To Watch: BT Sport. Prelims will be live from 6pm, while the main card is expected at approximately 9pm

Jairzinho Rozenstruik is a heavyweight conundrum at the moment. He made waves upon entering the UFC, breaking the record for fastest heavyweight knockout by his second fight and defeated veterans Alastair Overeem and Andre Arlovski in emphatic style along the way. His career path was following a steady trajectory until he lost to Francis Ngannou in Australia via a dramatic knockout. The barrage of punches saw the Surinamese kickboxer hit the ground hard, and despite bouncing back with a win over Junior dos Santos, his last three fights have seen him lose twice, with a win over Augusto Sakai sandwiched between losses to Curtis Blaydes and Cyril Gane.

‘Bigi Boy’ clearly has the power and skill to get wins, but losses to technical fighters like the aforementioned Blaydes and Gane don't bode well as he rises through the division. Francis Ngannou may be leaving the company to pursue financial success in a boxing/MMA hybrid match-up with Tyson Fury, but the heavyweight division is swelling and only the best technical fighters are rising to the top. The man keeping away the less-technical fighters? Alexander Volkov. 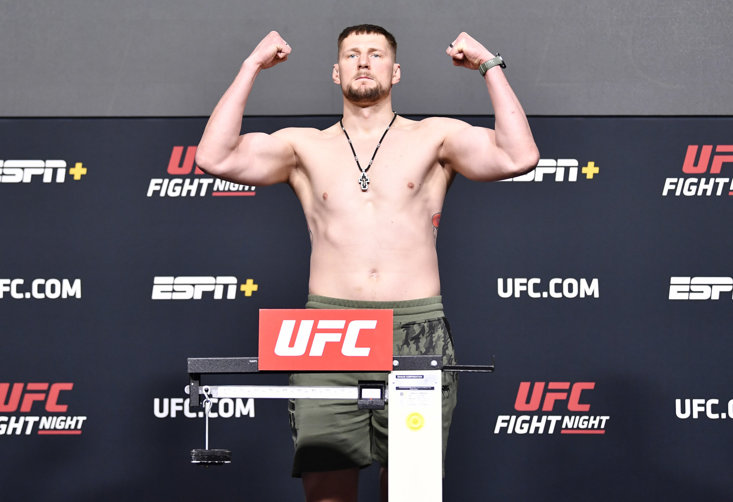 The six-foot-seven behemoth was most recently defeated by Tom Aspinall, the rising English star who will headline the O2 Arena in July for the second time. Before that he defeated the likes of Marcin Tybura, Walt Harris and Overeem as they also attempted to get back towards the top five. ‘Drago’ has an interesting loss column too, with defeats to Aspinall, Derrick Lewis, Cyril Gane and Curtis Blaydes, showing that those that defeat him progress towards a title shot. Rozenstruik is hoping to follow suit.

Dan ‘50K’ Ige needs a win to get back on track. Three losses in his last four fights have added a contrast to his initial six-fight win streak when he first arrived in the organisation. A fresh start is much needed to get himself back fighting against some of the best in the Featherweight division.

Movsar Evloev on the other hand, is just about getting started. He’s found a bit of luck after unfortunately testing positive for Covid-19 in January, as he was meant to fight Ilia Topuria, but instead got matched up with Ige, five places ahead of Topuria in the rankings. A win almost guarantees a number next to his name when he returns to the Octagon and he’s so far undefeated in ten fights in M-1 and five in the UFC.

One to watch is Erin Blanchfield versus JJ Aldrich. Blanchfield, aged just 23, dropped out of college, where she was studying to become a broadcaster, to focus her efforts on a career in the UFC. Also on the card is Jamaica’s Ode’ Osbourne who is looking to get going after fighting twice in a row with his opponent missing weight. He will face Uzbekistan’s Zarrukh Adashev, who is hoping to recapture the form he showed in his undefeated run in Bellator.