Max Verstappen once again showed his threat to record-chasing Lewis Hamilton as he overtook his rival late on to snatch victory in the French Grand Prix.

Despite gambling on an extra pit stop to sacrifice the lead, the decision by Verstappen’s Red Bull team to change tyres paid dividends as he passed Hamilton’s Mercedes with less than two laps to go. Red Bull's Sergio Perez took the final podium position from Hamilton's team-mate Valtteri Bottas in the closing laps as his tyres faded.

Verstappen’s victory came despite his early mistake which gifted Hamilton the lead when he slid wide at the first corner of the race and ran off track. The enthralling race came as a surprise to many considering Paul Ricard in the south of France is notorious for producing dull affairs. Thankfully the constant battle between Verstappen and Hamilton brought some much-needed life to the arena to provide a fantastic French Grand Prix.

This was a race which will long be remembered due to its dramatic finish, and Verstappen’s excellent late overtaking move has further extended his lead in the Drivers’ Championship standings. Verstappen now holds 131 points at the top of the leader board with Hamilton in second on 119 after seven races, and Red Bull have now tasted success in the last three. With a 12-point lead, Red Bull have some breathing space before heading to their home track in Austria, where this battle for the ages will be fought across the Stryian mountains. 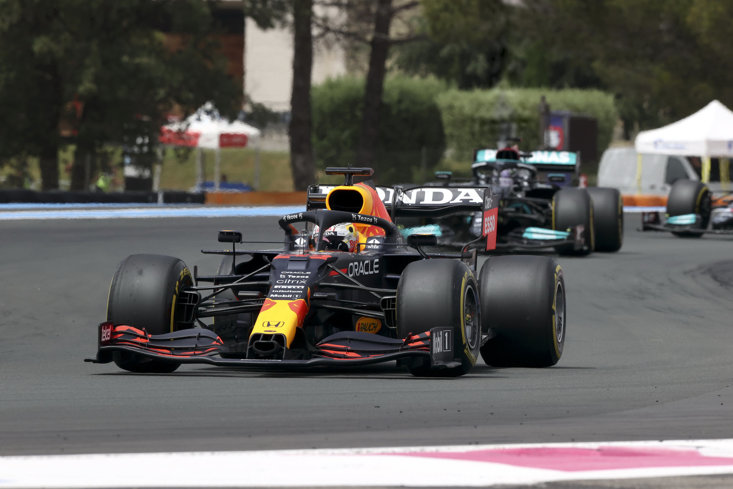 VERSTAPPEN WON THE RACE BY OVERTAKING HAMILTON ON THE PENULTIMATE LAP

Following Verstappen’s early error, his team had a mountain to climb as Hamilton pounced on the mistake. However, with help from an aggressive, forward-thinking strategy from his team, Verstappen drove with controlled excellence to recover after a second pit stop and inflict the same pain on Hamilton that the Mercedes man dealt him in Spain.

This constant back and forth between the top two drivers promises to continue, with many hoping the phenomenal pair could provide a title race for the ages. With racing being of a consistently high standard and pressure always being on, it will be interesting to see how Red Bull and Mercedes handle the spotlight as they go toe-to-toe for the title, as well as how Verstappen and Hamilton handle their nerve for their own personal glory.

In what many expected to be a procession for Hamilton as he looks to record a record eighth Drivers’ Championship title, there now appears set to be a wonderful tussle for the crown, with Verstappen having completely disrupted the one-horse race. On Sunday the Dutchman served further notice that he is going to fight all the way.