Motorsport
News
There was a time when F1 was the pinnacle of noise, innovation and all out bravado
Jack Porter
09:01, 08 Jun 2020

Harder, better, faster, stronger has been the ethos of Formula One long before Daft Punk made a single out of it. With 70 years of organised exhilaration, F1 is not only the pinnacle of motorsport; it is the pinnacle of accessible, relatable imagination, invention and technology, where success and failure is measured by the finest of margins. Resting on laurels is sacrilege, relative nonchalance where dynasties can be ruined, teams can compete then swiftly collapse. For every Ferrari, there’s a Forti Corse. For every Mercedes, a Maki.

F1 is the testing ground on which industries are built; the arena of innovation, data, failure and success that is taken from the F1 track and subsequently metamorphosing the motors seen on the everyday road.

As of June 8, 2020, it’s now been 191 long days (and counting) since motorsport fans were able to witness a Formula One race, when Lewis Hamilton polished his crown on the Yas Marina Circuit, Abu Dhabi.

There’s already a list of what to expect (and arguably more importantly, what not to expect) when the powers that be finally put the keys in the ignition to start the 2020 season, scheduled to begin with a double-header at the Red Bull Ring for the Austrian and debutant Styrian Grand Prix. Furthermore, as the new rules for the 2021 F1 season are released, and engineers begin to push their new designs out from the windtunnel and onto the track for testing, we take a look at some of the biggest and most surprising innovations in the history of F1.

Today changes are sometimes too small to even notice; a steer alteration, a lighter clutch, a 2mm shorter tail fin, quieter engines. But there was a time when F1 was the pinnacle of noise, innovation and all out bravado. 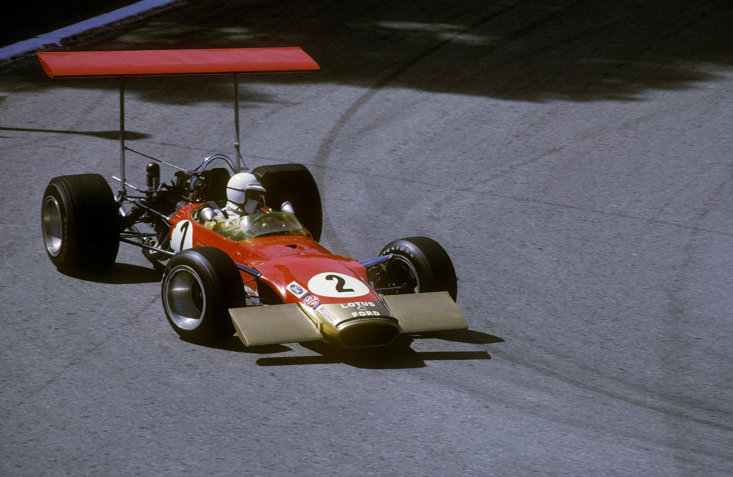 Piloted by the brilliant British duo of Jim Clark and Graham Hill (the latter winning a World Championship with it) and revolving around the decade-defining Ford Cosworth DFV engine, the Lotus 49 was an icon of the 60s. It was undoubtedly the era in which F1 was most exciting and revolutionary, year on year.

The first iteration of this Lotus run-out became an F1 trend-setter as one of the original competing cars to use a stressed-member drivetrain to reduce weight and was completed by a ZF five speed gearbox. Furthermore, it became the first F1 car to be presented in the colours of its sponsor, arriving in the red, white and gold of Gold Leaf cigarettes. Its large Firestone tires defied the consensus by being unusually supported by newly developed lightweight dish wheels.

Another groundbreaking innovation was later introduced with the incorporation of dramatic aerofoil wings towering above the chassis of the car, first bolted directly to the suspension and then later directly onto the bodywork. The most dramatic aerodynamic introduction whose influence is still felt today. 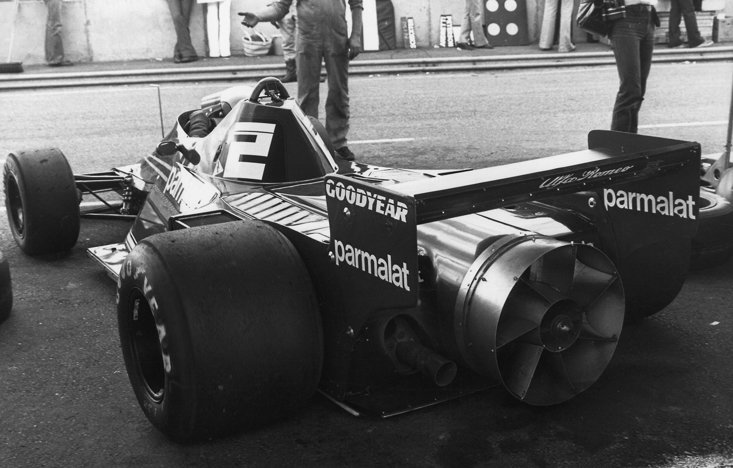 Designed by Gordon Murray (who would go on to join McLaren), Brabham were both devilish and ingenious with this short-lived concept. Brabham can produce sex on wheels when they want to, as proven with their recent ready-to-buy, yours-for-just-$1million supercar. And then they can also do this.

One of the most infamous F1 cars in history, the BT46B’s most notable feature was a gigantic fan attached to the back. The team claimed the fan was a cooling device, but in actual fact it was strapping the car to the floor to take corners. When the machine allowed Niki Lauda to win the 1978 Swedish Grand Prix by over 30 seconds, it immediately became persona non grata. 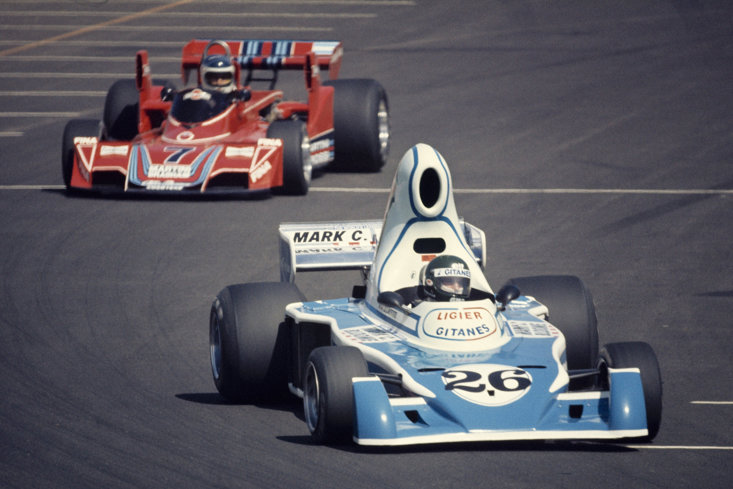 Owned by former driver and construction magnate Guy Ligier and designed by Gérard Ducarouge, it had an MS73 V12 3000cc engine, around 500 bhp with 11,600 rpm, a Hewland TL 2-200 five-speed gear box, but this is of course not why you can recall the Ligier JS5.

It is of course that ginormous ghastly air box launching almost over the cockpit, ‘the Teapot’, which made its bow in 1976. A failed attempt at advantage-making, the extension was the most eye-catching element in an overall ugly concept, with a stumpy front section and intrusive wingplates. 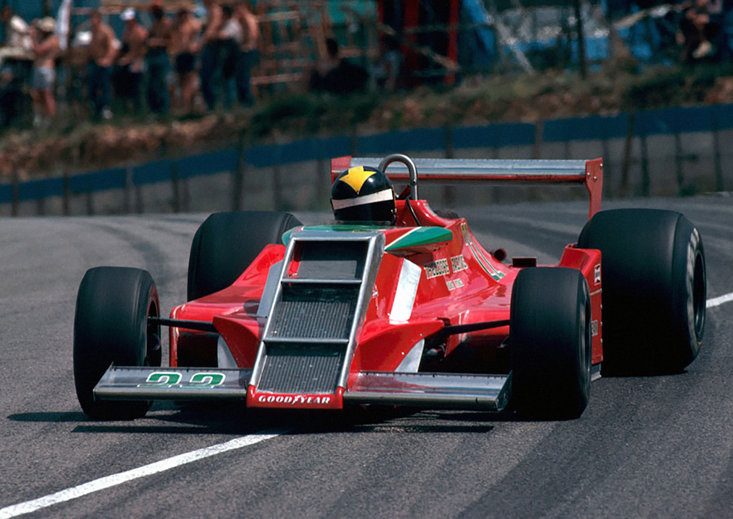 When a car is nicknamed ‘The Cheese Grater’ you know it’s not going to end well, but that’s what British constructor Team Ensign unleashed as the vehicle they hoped would hit Top ‘Gruyère’ at the 1979 World Championship.

The Ensign N179 has been regarded as the ugliest F1 car in history, due to it possessing three huge, front-mounted radiators in order to improve aerodynamics, arranged in an alpine gradient many pro skiers would be scared to attempt. The Ensign N179 failed to qualify for seven races and only managed to finish one. It’s main problem? Overheating. 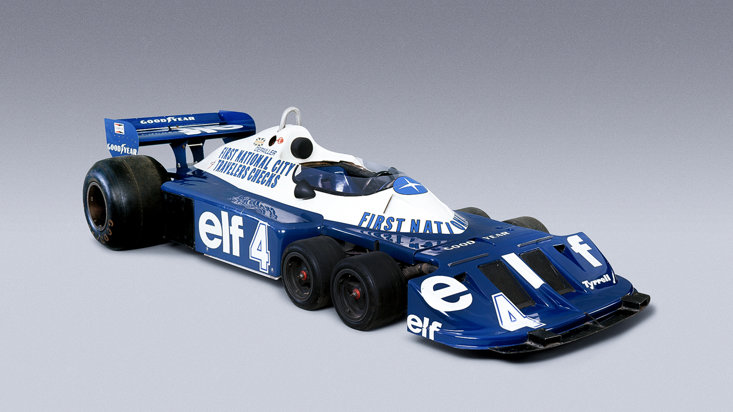 Imagine asking a child how to make Formula One more interesting, it wouldn’t be surprising if they came back with ‘more wheels!’. In the late 1970s and early 80s, before the FIA imposed restrictions (strictly boring four wheels now), several teams experimented with going the full Spinal Tap and taking the cars ‘up to 11’, with Ferrari, Tyrrell and Williams all attempting to enhance their vehicles through extra tyres on the track.

Out of these, Tyrrell was the most successful, planting six wheels – four small ones at the front and two large ones at the back – on an 1976/77 iteration intended to reduce drag and increase contact at the front tyres. The car competed in 30 races in 1976 and 1977, and Tyrrell got onto the podium with it 13 times and even registered a victory.