Golf
News
It's been seven years since McIlroy won the last of his four major titles so he will be determined to snatch victory in Kent this week
Conor Keane
06:55, 14 Jul 2021

Rory McIlroy will be hoping to make some history at The Open this week as he looks to become the second consecutive Northern Irish winner at Royal St George’s after Darren Clarke.

Clarke lifted the Claret Jug ten years ago at the Kent course after he triumphed by three shots to claim his only major victory at 42 years of age. Ahead of The Open, Clarke had dropped to 111th in the world rankings and he credited his upturn in form to a chat with American golf psychologist Bob Rotella which helped to sort out troubles with his putting stroke.

McIlroy has already worked with Rotella before and he has been working with him again as he looks to lift the second Claret Jug of his career, seven years on from his first at the Royal Liverpool Golf Club. It also marks seven years since the Ulsterman won the last of his four major titles so he will be determined to end his drought and snatch a fifth this week.

The 32-year-old has insisted he will not make the same mistakes he made at Portrush two years ago as he admitted his preparation was not right back then. He never recovered from starting his home Open with a quadruple-bogey eight, with his first drive going out of bounds, and despite bettering his first-round 79 with a fantastic 65, he missed the cut by a single stroke.

McIlroy reveals he did not handle the situation or the pressure well in front of his own fans but it is a lesson learned as he heads to Royal St George’s after last year’s event was postponed.

Speaking to the Belfast Telegraph, he said, “There is a lot to that in terms of I didn’t quite approach Portrush the right way in terms of preparing myself to play in that atmosphere in front of those people.”

“It was almost as if once that first round was out of the way I was unburdened because I was like ‘I can’t win from here’ and then I go out and shoot 65 on the second day.

“It’s trying to feel on the first day how I felt on the second day, I think that’s the key. That’s just unburdening yourself. There are certain things you can do, mental exercises, to get into that frame of mind but in Portrush that week I certainly didn’t do a good enough job and I learned from that and it is something I’ve obviously tried to improve on since.” 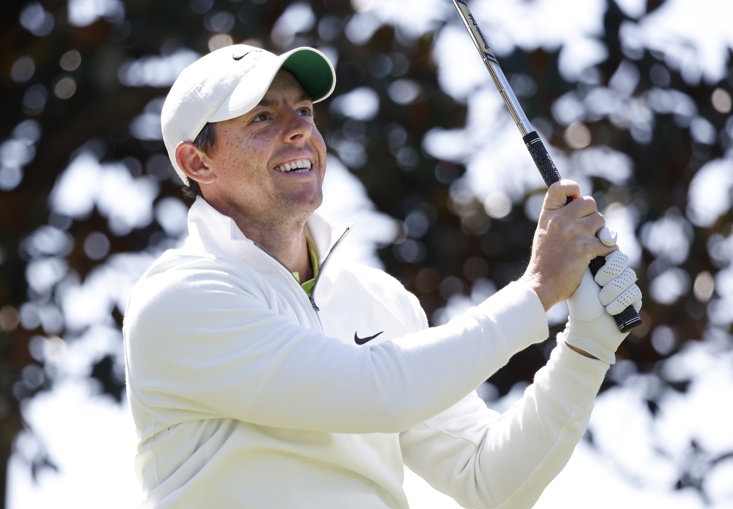 The world number 11 has had extra time for practice and recovery after missing the cut at the Aberdeen Scottish Open.

In his previous appearance he was tied seventh in the US Open, his second top-10 in this year’s majors after a joint-fifth at the Masters – having finished 49th in the US PGA Championship in May. McIlroy’s Open record that preceded his Portrush disappointment saw him post a victory, second, fourth and fifth in his previous four appearances.

There is a sense that another Claret Jug is well overdue but McIlroy does not like to be marked as just talented and he wants people to know how much work he puts into his game.

“I don’t like the ‘talented’ tag because it suggests if you are naturally talented you don’t work hard or practice.

“All talent is in the hard work you have put in over the years. There is no-one in the world of golf who has hit more golf balls than I have.

“I’ve been playing golf since I was two years old so the naturally-talented thing irks me as it gives off the impression I am lazy and don’t work as hard, which is obviously not the case at all.

“I get where people are coming from but there is a lot more to it than natural ability and talent and everyone out here will tell you the same thing.”

McIlroy will be hoping to prove this to his critics later this week as he chases victory at the Open Championship for the second time in his career.

x
Suggested Searches:
Manchester United
Liverpool
Manchester City
Marcus Rashford
Premier League
More
golf
Unflappable Collin Morikawa Wins The Open Championship After...
American Collin Morikawa has won the Open Championship’s Claret Jug for the first time after a [ ... ]
golf
Oosthuizen Holds His Nerve To Take One-Stroke Lead Into Final...
Louis Oosthuizen proved once again that he should never be underestimated, as even with a subpar performance [ ... ]
golf
Louis Oosthuizen Makes Open Championship History As He Tightens...
Louis Oosthuizen tightened his grip on the Open Championship with another phenomenal round that saw [ ... ]
golf
Louis Oosthuizen Takes Clubhouse Lead On Day One Of The Open...
Day one of the British Open got off to an exciting start at Royal St George’s on Thursday, with [ ... ]
golf
Rahm, Koepka Or Spieth? Simon Dyson Analyses The Open Championship's...
The oldest golf tournament in the world gets underway tomorrow as the world’s finest players meet [ ... ]
golf
Simon Dyson Predicts “Fantastic” Koepka Will Triumph At The...
Simon Dyson has predicted that Brooks Koepka will win the Open Championship at Royal St George’s.  [ ... ]
golf
Jon Rahm Becomes First Spanish Winner Of The US Open With Stunning...
Jon Rahm clinched his first major title and became the first Spaniard ever to win the US Open with a [ ... ]
golf
Can Brooks Koepka Make It Three Wins From Four At The US Open?
He may have dropped to number 10 in the world rankings, but Brooks Koepka’s showing in the opening [ ... ]
golf
Money Grab Or Needed Reform? Premier Golf League Could ''Revolutionise''...
The much-debated proposal of a Premier Golf League worth £250million is “entirely feasible” [ ... ]
golf
PGA Championship: Phil Mickelson Makes History As Oldest Ever...
Phil Mickelson, at 50 years of age, has become the oldest ever winner of a major as he put in an incredible [ ... ]
golf
British Masters: Richard Bland Claims First European Tour Win...
Richard Bland has been playing golf on and off the European Tour since 2002 and has never won a tournament. [ ... ]
golf
British Trio Leading The Pack At Halfway In The Betfred Masters
We’ve reached the halfway stage of the Betfred British Masters and it’s been a ball-striking [ ... ]
golf
Everything You Need To Know About The 2021 Betfred British Masters
European Tour golf returns to the UK this week for the first time since October with the Betfred British [ ... ]
golf
There's Plenty Up For Grabs As The British Masters Returns To...
European Tour golf returns to the UK this week for the first time since October with the Betfred British [ ... ]
golf
Matsuyama Makes Masters History To Inspire New Generation Of...
Hideki Matsuyama has written his name into golf’s history books by becoming the first Asian player [ ... ]
golf
Masters Round-Up: Hideki Matsuyama Races Into Four-Shot Lead...
Hideki Matsuyama shot a 65 on Saturday to leapfrog Justin Rose heading into the final day of the Masters [ ... ]
golf
Justin Rose Leads The Masters As Defending Champion Dustin Johnson...
Heading into the biggest weekend in the entire golfing calendar, Englishman Justin Rose leads the way [ ... ]
golf
Masters Round-Up: Justin Rose Leads The Way As Tommy Fleetwood...
The opening day of the Masters was all about Justin Rose who opened up a four-shot lead after hitting [ ... ]
golf
2021 Masters Tee Times & Pairings - Thursday 9th April
The pairings for the opening two rounds of the Masters in Augusta have been drawn and now we know exactly [ ... ]
golf
The Masters: Jordan Spieth Ends Four-Year Winless Run Ahead...
It’s hard to believe Jordan Spieth’s Masters triumph was six years ago. Now 27, [ ... ]
golf
The Masters: Former Pro Simon Dyson Explains What It's Like...
The Masters returns this week as World number one Dustin Johnson looks to hold on to the Green Jacket. [ ... ]
golf
Westwood Back In The Top 20 After Runner-Up Finish At The Players'...
A magnificent second-place finish in the Players’ Championship this weekend has moved Lee Westwood [ ... ]
golf
Players Championship Can Provide Rory McIlroy With Much-Needed...
Spark. Mojo. Pizzazz. Whatever you call it, Rory McIlroy doesn't have it right now. When McIlroy [ ... ]
golf
Messages Of Support Flood In For Tiger Woods Following Serious...
The sporting world has rallied to send messages of support to Tiger Woods after the golf legend was [ ... ]
golf
Man, Megastar, And Mortal: The Book Examining The Second Life...
He’s the one name people who know nothing about golf, know about golf. But aside from the 15 Majors, [ ... ]
golf
Inside Michael Jordan’s Exclusive Golf Club, Where Drinks Are...
To the casual observer the Grove XXIII may seem like just another ordinary golf club in Hobe Sound, [ ... ]
golf
Caley Show That Buying Top Quality Golf Clubs Needn't Be Pricey...
A trip to the local golf course may seem like a distant dream for many of us, with the nation being [ ... ]
golf
The Best Gear And Gadgets To Get Your Golf Game To The Very...
“Confidence is the most important single factor in this game, and no matter how great your natural [ ... ]
golf
Flawless Colin Morikawa Is Golf’s Next Big Thing - But We Shouldn’t...
The world of golf witnessed one of the most remarkable feats in the sport’s history this weekend [ ... ]
golf
Squad Up! The Golf Gadgets Straight Out Of A Call Of Duty Game
Unless you live in Manchester where you’ve likely been raving hard in a field for the last three [ ... ]