England’s 2019 Rugby World Cup campaign steps up a notch on Saturday when they meet Argentina in Chofu.

It has been smooth sailing so far, with routine victories over Tonga and the United States. But those were expected wins, and the Pumas were present a different challenge entirely. Argentina are one of the top 10 nations in the world, members of the Rugby Championship and quarter-finals at the World Cup four years ago.

It hasn’t been the best tournament so far for the Argentines. They suffered a close 23-21 loss at the Tokyo Stadium against France in their first game. Only a late penalty kick separated them from the French.

They followed that up with a 28-12 win over Tonga. But they can’t afford another slip-up if they are to go through to the next round. Beating the Red Rose is a must for the South Americans.

Argentina has been on the rise as a rugby nation in the past four years, starting with the entry of the Jaguares into Super Rugby in 2015. They have given them their own club side in Super Rugby and proved a better pathway for the development of local players.

This journey culminated earlier this year when the Jaguares made it all the way to the Super Rugby final. They may have been beaten by the Crusaders, the Kiwi team chock-full of All Blacks, but they finished second and earned a lot of respect.

Thirteen of the side that play in Super Rugby for the Jaguares will face England. They have become the cornerstone of the national team. 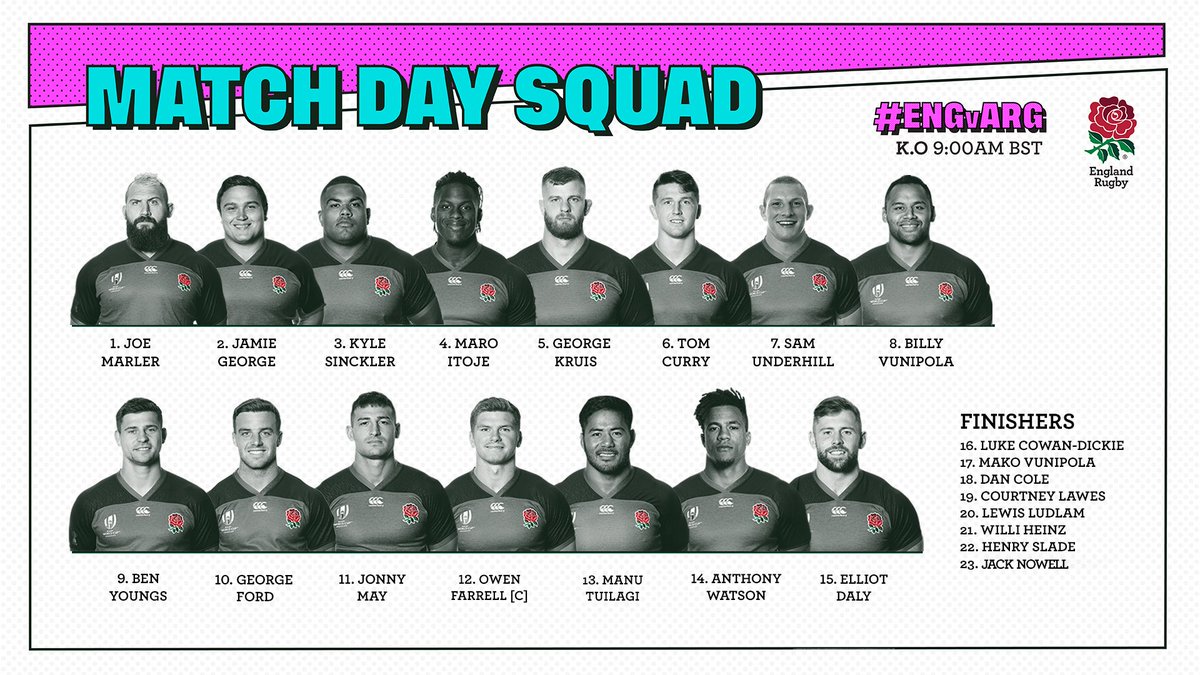 Hooker Agustin Creevy has already lit the fuse before the match, stating that England’s style of play is “boring”. Creevy spent two seasons in the UK playing for English club Worcester.

“I think sometimes [their structure] is boring but it’s good for England, and it works,” Creevy said. “I spent a lot of time there and it was great. I improved a lot in the way I see rugby, and I understand a lot about how the England boys see rugby. They are really structured.

Saturday is going to be like a war, it’s like a final for us. I think the battle with the forwards will be the game. We need to win the scrum, win the lineout, win the maul, win the contact, the breakdown.

Sporting contests between England and Argentina, ever since the Falklands War in 1982, have always retained an extra bit of spice and interest. This will be not different.

England can be confident going into this match as they had a fantastic record against the Pumas. They have won the past nine games against Argentina in a row, with their last loss coming in 2009. The two countries have only met twice before at a Rugby World Cup – in 1995 and 2011 – and England were victorious on both occasions.

But at the same time, they can’t underestimate Mario Ledesma’s boys. Fly-half Benjamin Urdapilleta is coming off a fantastic season in France with Castres. Tomas Cubelli is an experienced and wily scrum-half. In the back-row, they have explosive talent in Tomas Lezana and Marcus Kremer.

Out wide they have electric speed in the back three trio of Emiliano Boffelli, Matias Moroni and Santiago Carreras. And in captain Pablo Matera they have one of the best players in the world, 110 kilograms and 193 centimetres of prime Argentine beef.

The Pumas are treating this as their World Cup final. England need to match their intensity if they want to reach the one on November 2.