Ian Robertson, the former BBC rugby commentator and one of its last distinctive voices of sport, left the gantry in 2018 with little to complain about. Retiring from the corporation after 47 years (it was his choice), rather than a more aesthetically pleasing 50, might have bothered some people, as would that colon in the title, but Robertson is a man who has extracted more than enough delight from his career to transcend such vexations.

Born in Edinburgh in 1945, he immersed himself in sport immediately, and although he self-deprecates frequently on a modest rugby talent, especially his inability to get anywhere near opponents when his own physical integrity was at stake, he was selected for Scotland eight times and made the Lions shortlist before his ligaments went.

That first Scotland call up in 1968 also included the following financial consideration: “Please bring with you one pair of rugby boots. We will present you with your stockings and jersey, which must last the whole season. Should you wish to swap your jersey with a member of the opposition, you will be able to buy a replacement for 15 shillings. If you are arriving by train at Waverley, you can catch either the 23 or the 27 bus. Your fare will be refunded in full.” The glamour of it.

Eventually, that thwarted international experience helped provide an entrée to the commentary booth as a protégé to the legendary Bill McLaren, and the beginning of a prolific media career. And that's when the BBC was synonymous with the finest events the sporting calendar had to offer.

There he learnt that “Fluency is everything in radio commentary – every ‘um’ is an embarrassment, every ‘er’ a humiliation”, and McLaren showed what it took to achieve it. A teacher during the week, he squeezed in 18 hours of preparation for every rugby broadcast.

When Robertson later asked why the epitome of radio anchor smoothness Des Lynam was hunched over his desk one quiet Monday morning, he was told he was listening back to the previous Saturday’s show, all five hours of it, a weekly session of auto-criticism that would have delighted Mao himself.

The Robertson brogue was later also bestowed on racing and golf coverage, and his rugby credentials eased his passage into showbusiness too, as he befriended rugby fanatics Peter O’Toole, Richard Harris and Richard Burton. 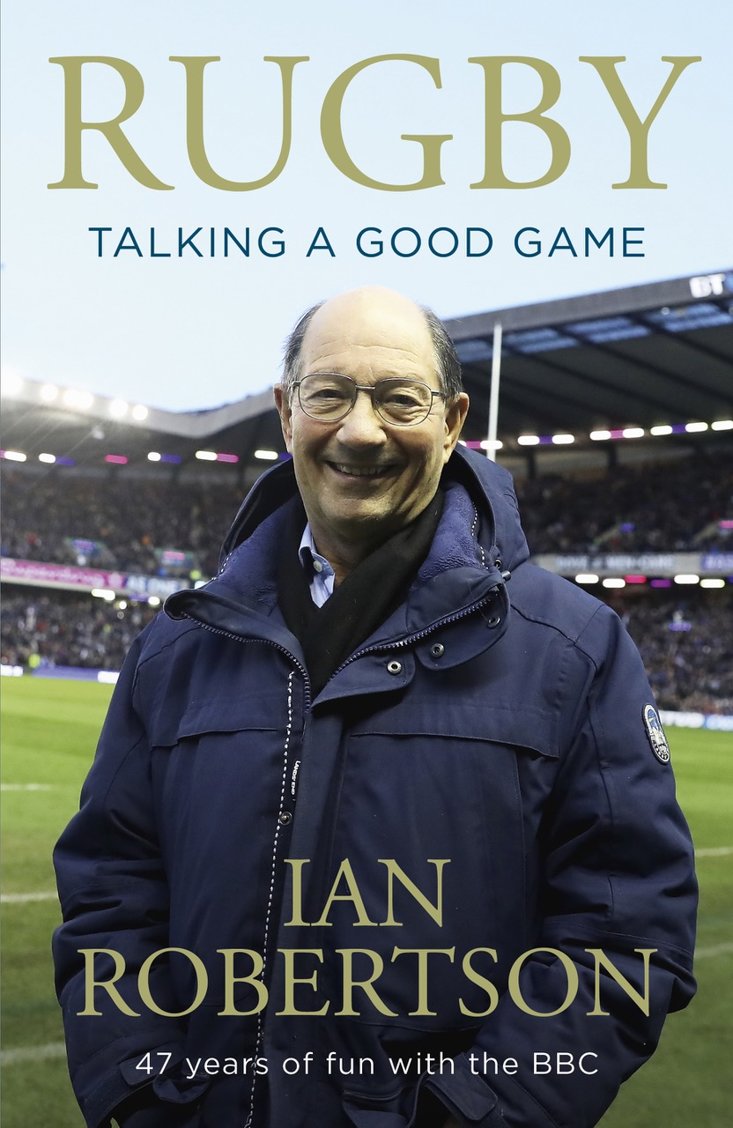 “To today’s generation, he (Burton) might not mean much more than Willie John McBride or Phil Bennett or any of the other Lions greats of the 1970s,” he writes. And indeed, for all his after-dinner corralling of anecdote (there’s a great story about blagging an interview with Nelson Mandela, then Mandela upbraiding him at a later event for not saying hello. “When I walked in and our eyes met, I recognised you immediately,” says Robertson by way of explanation to the great leader, “I just couldn’t remember your name.”

You’ll be needing an appetite for the last fifty years of rugby as voracious as the author’s to derive full nutritional value from his memoir.

Every so often, the selection dilemmas of Lions tours past, Caledonian club rugby rivalries and fantasies of Scotland crushing England by obscene margins wander into “Only Connect” levels of obscurity.

Yet every so often too, most people would happily find themselves open to discussions over just what they’d have to give up in their own lives to get their hands on Robertson’s relentless enthusiasm for his “47 years of fun.”

x
Suggested Searches:
Tyson Fury
Manchester United
Marcus Rashford
Lewis Hamilton
F1
Air Jordan
More
rugby
England Need To Be Cool, Calm And Composed Against Wales In...
Eddie Jones is imploring his England side to be on the alert for any scheming from Wales captain Alun [ ... ]
rugby
France v Scotland Six Nations Game Called Off After Latest Positive...
France’s upcoming Six Nations match against Scotland, due to take place this Sunday, has been [ ... ]
rugby
Jack Nowell Aiming For England Recall When He Returns From Injury
England and Exeter winger Jack Nowell looks set to return to action in March after being sidelined for [ ... ]
rugby
Can Eddie Jones Really Blame A Lack Of Fans For England's Six...
England’s start to the Six Nations has been underwhelming to say the least. An opening day defeat [ ... ]
rugby
It Wasn’t Pretty But England Get Back On Track In The Six Nations...
It wasn’t pretty and wasn’t as easy as past England triumphs over Italy but Eddie Jones’ [ ... ]
rugby
How The Six Nations Has Become A Pivotal Moment In Eddie Jones'...
England’s shock defeat to Scotland last weekend certainly threw up more questions than answers [ ... ]
rugby
Six Nations Blown Wide Open With Scotland's First Win At Twickenham...
This year is different. How many times have we heard that over the last twelve months? The global pandemic [ ... ]
rugby
Eddie Jones' Mind Games Can Only Help To Fuel Scotland's Fire...
Eddie Jones has been at the mind games, but it feels like he needn’t really bother. Scotland arrive [ ... ]
rugby
Betfred Super League To Return Without Scrums Due To Covid-19...
The Betfred Super League season will begin without scrums following confirmation from the RFL board [ ... ]
rugby
Three Reasons Why England Winning The Six Nations Isn't A Foregone...
England go into the 2021 Six Nations in imperious form. The defending champions have finished outside [ ... ]
rugby
England’s Beno Obana And Maro Itoje Tackle Race In Rugby In...
Rugby Union has a race issue. It’s uncomfortable to talk about or even acknowledge but it’s [ ... ]
rugby
Hard Men Of Rugby, The Book That Revels In The Legendary Tough...
The famous maxim goes that 'football is a game for gentlemen played by hooligans, and rugby union [ ... ]
rugby
‘Rob Burrow: My Year With MND’ Is Emotional, Educational And...
“I’ve too many reasons to live. I’m not giving in ‘til my last breath.” [ ... ]
rugby
The Rugby Playing Ninja DJ, Welcome To The Many Lives Of James...
Sport, and rugby in particular, needs James Haskell. Brash, outspoken and at times just plain crackers, [ ... ]
rugby
Book Review - Pride And Passion By Warren Gatland
Halfway through this meaty autobiography, Warren Gatland, a confident and successful individual, comes [ ... ]
rugby
Book Review: Rory Best - My Autobiography
The last few years have been among the sunniest in the Ireland rugby team’s history. Yet [ ... ]
rugby
Eyewatering! 857 Million People Across The Globe Tuned In To...
Approximately 200 years ago, the world’s population was estimated at around 800 million people.  [ ... ]
rugby
Eddie Jones Admits ''I Don't Enjoy Coaching'' As Talks Linger...
Eddie Jones was not giving anything away when asked about his England future but did admit he doesn’t [ ... ]
rugby
New Look Wales Are Vulnerable To England's Intelligent Six Nations...
It’s no secret that, on their day, England have a power game to match most teams in world rugby. [ ... ]
rugby
Eddie Jones Is Determined To Squeeze Every Last Drop Out Of...
Eddie Jones’ team selection for England v Ireland got a lot of headlines, with five locks and [ ... ]
rugby
Huge Fall In Concussions At Rugby World Cup After Successful...
Rugby’s new high-tackle rule saw a huge decrease in concussion incidents at last year’s [ ... ]
rugby
England Channelled Their Inner Tyson Fury To Pummel Ireland...
Onslaught. According to the Oxford English Dictionary, the definition is: “an onset, assault, [ ... ]
rugby
Six Nations 2020: The Recent History Of England And Ireland's...
In a tournament packed with fierce and historic rivalries, England vs Ireland is a doozy. The history [ ... ]
rugby
Six Nations 2020: Can Wales' Defence Be The Difference Vs Recent...
Two nations once renowned for the flair have, in recent years, been written about for rather different [ ... ]
rugby
Six Nations 2020: Italy And Scotland Fight To Avoid The Wooden...
The match between Italy and Scotland has often been dubbed “the battle for the wooden spoon” [ ... ]
rugby
Russell Vs Townsend Is The Talk Of The Six Nations But What's...
Forget the Le Crunch, Calcutta Cup, England vs Wales, and the battle for the wooden spoon. This Six [ ... ]
rugby
Huw Jones: How A Sleepless Night Was The Making Of The Scotland...
It was a stranger’s bout of insomnia which brought Huw Jones to live out his Six Nations dream. [ ... ]
rugby
Eddie Jones Turns Defeat Into Victory With His Very Own Six...
It ended up being a threat more than a promise, but Eddie Jones' decision to name six forwards on [ ... ]
rugby
Owen Farrell Is A Leader Of Men - But Is He The Best Man To...
Alun-Wyn Jones has always been a leader. Ask anyone. But, for years, the softly spoken Sam Warburton [ ... ]
rugby
Meet The Englishman Teaching France To Play Like Wales In The...
It was in the home coaching box of the Stade de France that Shaun Edwards found himself on Sunday afternoon [ ... ]