It appears that confident predictions of snooker’s upper echelons being dominated by the Chinese may have been exaggerated – or at least slightly premature.

The semi-final line-up at the Betfred World Championship this year featured four English players, with ages ranking from 44 in the shape of Stuart Bingham, down to Kyren Wilson at 29. Shaun Murphy and Mark Selby made up the quartet.

It is not so long ago since this last happened, just six years in 2015 when eventual winner Bingham and the 2005 champion Murphy were joined on that occasion by Barry Hawkins and current world No1 Judd Trump.

The United Kingdom and the Republic of Ireland have of course been the sport’s traditional power base going back decades. But that hegemony has certainly come under real threat in recent years.

Everyone involved in snooker remains surprised that Ding Junhui has still not become the first Asian player to lift the famous trophy, and the chances of that happening seem to be fading.

Ding, who at his brilliant best is almost unplayable, has shown patchy form over the past three seasons despite winning a third UK Championship crown in December 2019.

He is pretty comfortable financially with large sponsorships from home, maybe that has taken some edge off. And there were always question marks about his performances at the Crucible in the early years of making it to the venue, with some shock losses and surprising defeats.

One Crucible final for Ding, who lost in the first round again this year albeit to the most dangerous qualifier in Bingham, looks very light for a player of his undisputed calibre. He remains the only Chinese player to have made it to the showpiece.

And so attention in the Far East is starting to shift towards the likes of reigning Masters champion Yan Bingtao, Zhou Yuelong and Zhao Xintong as the next cabs on the rank in terms of possible world champions from Asia. 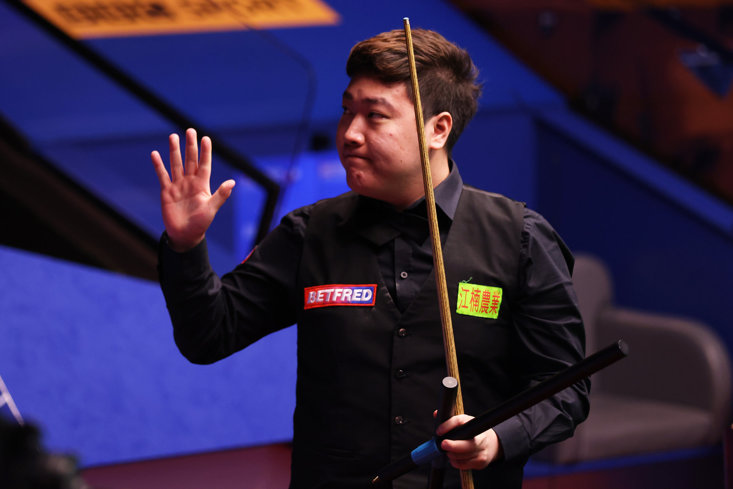 The vast majority of these players, having made it either close to getting on tour or actually playing as a professional, relocate to the UK and base themselves in one of several academies, with Sheffield itself a major hub.

Having emerged from the strong Chinese youth and amateur system backed with hard cash and government money, there is simply no similar long list of names emerging at those ages from England, Scotland, Wales, Northern Ireland or the Republic who receive almost nothing for grass roots snooker.

Yan, who at 21 had a huge Majors breakthrough by winning the Masters in January, had a chance to become the youngest ever world champion this year but after he lost to a rejuvenated Shaun Murphy in the second round of the World Championship this year that record of Stephen Hendry’s set in 1990 looks safe for at least a couple of years yet.

The record number of Chinese players to reach the final stages of the World Championship either as seeds or via the qualifying came two years ago in 2019, when Ding was joined by Li Hang, Luo, Zhao, Zhou and Tian Pengfei. And if the final round of qualifying had gone differently that record might easily have been beaten this year, with eight a real possibility this time.

But for all this and serious concerns about the future with the conveyor belt of British talent coming through appearing to be slowing down, back in the present the power remains largely with a more homegrown contingent along with Australia’s Neil Robertson.

And bearing in mind none of the serial winners from the Class of 1992 – Ronnie O’Sullivan, John Higgins and Mark Williams, all still playing to a high standard – or world No1 Judd Trump or Robertson or the promising Jack Lisowski were in the last four, the traditional power base has not faded from view just yet.

They can expect an ever more concerted challenge from Asia, not forgetting Thailand where the game is so popular, and also mainland Europe, where Belgium’s Luca Brecel has already won a ranking title, and Germany, Switzerland, Poland and even now France are all producing players.

But though the rest of the world is knocking on the door and eyeing glory at the blue-riband tournament, this year the winner will be from UK shores.