Friday the 13th is a date forever linked with horror.

A seemingly endless film franchise coupled with its superstitious overtones makes it a date worthy of being circled with a red Sharpie.

But this Friday, September 13, promises to be a potential horror show for four frightened Super League clubs who have the spectre of relegation hanging over them.

After a combination of bizarre results in recent weeks, Hull KR, London Broncos, Huddersfield Giants and Wakefield Trinity all go into Friday’s games knowing they could be relegated to the Championship that night.

This is the first season for some time that the “one up, one down” method has been used after the controversial Super 8s and its unfortunate offspring The Million Pound Game were axed.

All the games involving the trapdoor teams will kick off at the same time on Friday night meaning a nervous night for thousands of supporters along the M62 corridor.

London Broncos were pre-season favourites for the drop having been promoted last year in the Million Pound Game, beating red-hot favourites Toronto Wolfpack in Canada. They’ve enjoyed an unlikely league double over League Leaders Shield winners St Helens, who much to the annoyance of their rivals, selected understrength teams for both fixtures against the Broncos, and on Friday pulled off a last minute win at fellow relegation candidates Hull KR.

This Friday, the Broncos go to Wakefield and the equation for coach Danny Ward is simple: win and you stay up.

Despite a reasonable start to the season, Wakefield have fell off a cliff in recent weeks and they look like a side desperately short of confidence. That said, they are at home so will start as favourites to beat London.

Wakefield coach Chris Chester has banned his players from using social media and speaking to the press until after Friday’s game in a bid to make sure everyone at the club have no distractions. 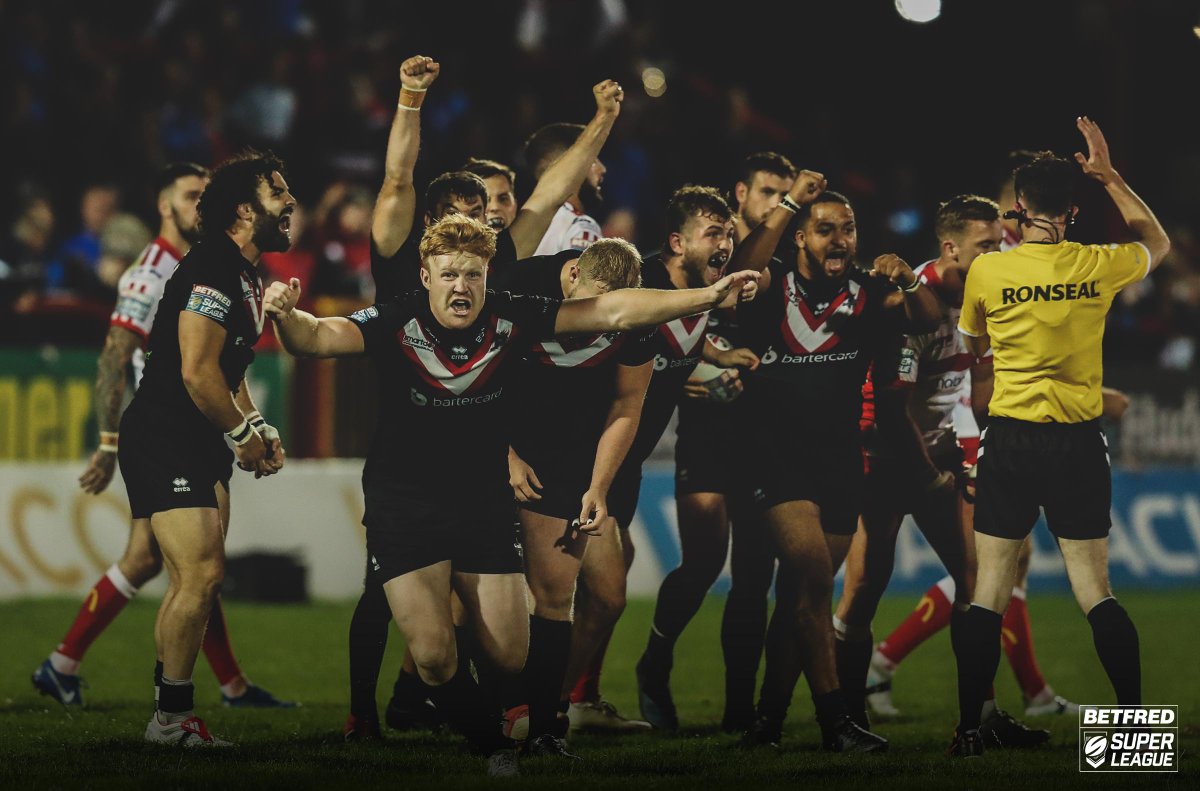 Across the Pennines, this season’s surprise package Salford are on course for their best-ever Super League finish. Their play-off place was secured with a stunning win at Headingley but a win over Hull KR could earn them third spot which would represent a huge deal for Ian Watson’s men.

In contrast, the Robins are desperate to stay up and they won’t thank me for reminding them that it was Salford who relegated them three years ago when a Gareth O’Brien drop goal settled the Million Pound Game. At least O’Brien’s at Toronto now…

Huddersfield, who tamely folded at Saints last Friday are at home to Catalans a team that look like they’re already thinking about their holidays. Without any pressure on their shoulders, Catalans may surprise us but Huddersfield, purely on home advantage alone, will start as favourites.

At the top of the table, there is another scrap going on for play-off places with Warrington needing a win at Leeds while on Thursday, Wigan welcome Castleford, a game Hull FC will be watching closely. Hull FC need to beat Saints and hope Wigan win against Castleford to have any chance of a play-off spot.

The race to replace Wakefield, London, Huddersfield or Hull KR begins this weekend with Toronto the hot favourites to make the leap to Super League from the Championship.

Featherstone, York, Leigh and Toulouse are also in the mix with the Centurions the only one of those clubs to have already played in Super League.