Snooker
News
Ahead of Sunday's conclusion to the UK Championship, we take a look at five of the greatest finals the tournament has seen
Hector Nunns
08:35, 02 Dec 2021

Traditionally the second-biggest tournament on the calendar, the first Triple Crown event of the season and a pre-Christmas snooker treat all rolled into one… the UK Championship has seen some incredible finals and great champions over the years since it began in 1977. Patsy Fagan beat Doug Mountjoy in the first showpiece with the event attaining full ranking status in 1984 when Steve Davis won the third of his six UK titles with victory over Alex Higgins.

There was plenty of difficulty in trying to get it down to the top five, and particular apologies to the 1994 final that saw Stephen Hendry make a still-record seven centuries in a best-of-19 frame match in a 10-5 win over Ken Doherty, and last year’s classic showpiece that saw Neil Robertson edge out Judd Trump 10-9. That one only just misses out on this occasion. But here we go, ahead of the 2021 final on Sunday, December 5th at the York Barbican.

Alex Higgins may have been the much-loved ‘People’s Champion’ but Steve Davis had become the sport’s dominant force and was a warm favourite for a third UK title, even more so when he led 7-0 after the first session. But roared on by his loyal army of supporters Higgins had pegged it back to just 8-7 down after a superb second session, and finally secured a famous triumph in the decider. It ended up being more than just a match, but a lasting representation of a rivalry featuring such a marked clash of styles and personalities.

Higgins said: “I feel like I have been in one of Marilyn Monroe’s pictures, Some Like It Hot. People tend to write you off when you are that far down, but in the past on numerous occasions I have been that far behind and come back and won, even if with less formidable opponents. I put Steve under the type of pressure he puts other players under. And if you keep it up, there has to be a chink in his armour and I found a few.”

Davis, reigning world champion at the time, said: “Sometimes you can murder the bloke by a lot, which I have done, and other times you get pulled back because the other guy is a bit the underdog. And that is what Alex did in a tremendous second session. I am glad Alex is playing better because it makes for these great games. There were certain times after being 7-0 in front and Alex is coming back and the lead is slipping away that a bit of panic creeps in.”

Stephen Hendry had already beaten Steve Davis the year before in the UK final to suggest the end of one era and the start of another one – and in even more thrilling style the Scot confirmed the passing of the baton with this final-frame classic encounter. Hendry had trailed 15-14 and 49-0, but Davis missed good chances to win the title in frame 30. After a brilliant 57 clearance to the pink from Hendry to level the scores at 15-15 he punched the air, then won the decider with an ice-cool break of 98, rubber-stamping the changing of the guard after a first world title earlier in the year.

Reflecting back on the final years later, Hendry said: “The blue I potted near the end of the break to get to 15-15 was without a doubt one of the best shots of my career. It was a crazy shot to take on, I was almost guaranteed to stick it up if I missed it and I doubt I would even take that on nowadays.

“But it was just one of those clearances, you are full of adrenaline and you don’t even think of playing safe. You are on such a roll, potting the balls to clear up. Steve had had four or five good chances to win the match but didn’t take them, and I knew this was my chance. Going into the decider I had a new lease of life, and it felt like a new match.”

A bit like the Hendry/Davis UK finals of 1989 and 1990, this one almost has to go in for signalling the arrival of a remarkable and unique talent onto the snooker stage. Ronnie O’Sullivan was still a teenager having only turned professional as part of what would become the iconic Class of 92 – with John Higgins and Mark Williams – a year earlier. And this was to be his first ranking title success at just 17 achieved against Hendry, unquestionably the game’s top dog. It heralded a terrific series of big matches between the pair. O’Sullivan claimed a 6-2 lead after the first session and extended that in the evening, and despite Hendry’s late rally the Rocket could not be caught. O’Sullivan has gone on to win the UK a record seven times.

O’Sullivan said: “It was a proud moment winning the UK because I knew how much it meant to my dad. I had become a professional the year before, this was now a job and I had to go out and fulfil my potential. But in the pre-TV stages of the UK in 1992 I had lost to Cliff Wilson, I was devastated, I went back to the hotel crying my eyes out and smashed my cue case on the floor.

“So then 12 months later to go and win the UK, it was mental – UK champion at 17 years old, wow. I had beaten my hero Steve Davis, and then my new hero Stephen Hendry who I thought was the best thing since sliced bread. I beat all these people in one event and all of a sudden went from no one knowing me to being UK champion. I only realised that impact the next day at breakfast.”

There were so many contributing factors that went into this being one of the most memorable UK finals generally, and a particularly emotional success for John Higgins personally during the most difficult year of the Scot’s life. After a shock exit to Steve Davis at the World Championships Higgins went on an ill-fated trip to the Ukraine with his former manager, that resulted in a sting operation from the now discredited and defunct News of the World newspaper.

Though Higgins was cleared of any match-fixing he received a six-month ban for failing to report a suspicious approach. When he returned it was with a grim determination, and the additional backdrop to this tournament was that his father was gravely ill at home. Higgins somehow recovered from 9-5 down against Mark Williams to win 10-9, making it 18 wins from 19 matches in total following his ban. He went on to win the Welsh Open and the World Championship that season.

Higgins said: "It's not just for my dad, it's for all my family. It means everything to me to be back playing and competing. It's what dreams are made of. I thought 9-5 was a mountain to climb but I never gave up. Maybe it was fate. I was a man on a mission. I was really determined to try and stop anything which prevented me from winning it. Given everything that surrounded it, this is my finest hour on the table. It means everything, just to be back playing and winning. It means a great deal. Obviously it means a great deal to my family as well.”

By 2014 another young and exciting player in the form of Judd Trump had started to establish himself among the elite, and looked every bit the apprentice to Ronnie O’Sullivan’s sorcerer in the array of talents on the professional tour.

The UK had been Trump’s breakthrough Triple Crown title back in 2011, the same year he reached the Crucible final losing to John Higgins. And there was a huge sense of anticipation ahead of the clash in such a major final of the two most entertaining players on the circuit. And on this occasion, no one was left disappointed. O’Sullivan, chasing a fifth UK title at the time, surged 9-4 up but Trump roared back to level at 9-9 and force the decider – only for the Rocket to take the trophy with a break of 51. 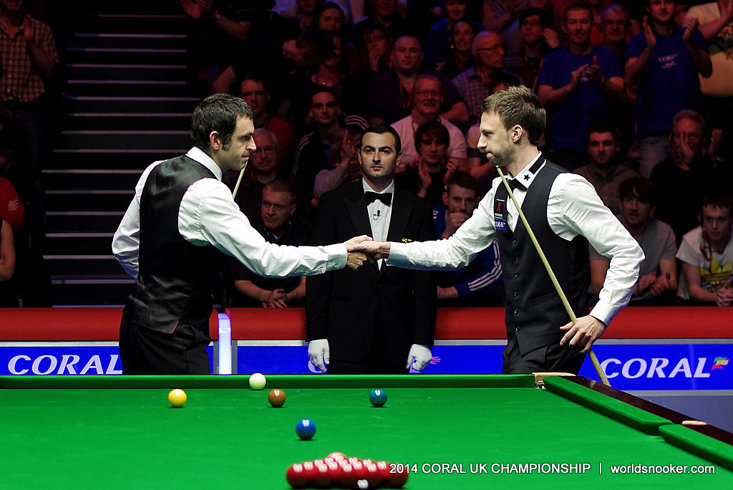 O’Sullivan said: “That is the hardest match I have ever played. I was going through the motions and accepted I was going to get beaten. I can't believe I've won it. I don't want to be playing him in every final, I feel like retiring. He's a tough opponent, he's very dynamic and very explosive. He's got so much cue power, he can pot like you wouldn't believe. He's fearless, and he's in your face the whole time. So I'm going to enjoy this moment.”

Trump said: “When your opponent is dishing up every time, it is demoralising and dents your confidence. But towards the end I let go and I made a good clearance to go 9-9. I felt so relaxed and was waiting for the chance in the last but the good safety won it for him. I was giving in, but then I got to 9-5 and then I got a few chances and made a few breaks. I'm a little bit annoyed but I didn't really have a chance in the last frame. I didn't bottle it, and gave it my best.”