Snooker
News
Airing on Sunday, the three-part BBC doc looks at snooker's rise in UK pop culture in the 1980s and the huge celebrities and controversies it created
Hector Nunns
08:00, 03 May 2021

There are no white supremacist groups, prisoners on Death Row, or religious zealots in Louis Theroux’s latest venture into TV documentary.

The presenter with a taste for the esoteric is off screen and executive producer for the ‘Gods of Snooker’ three-parter starting next Sunday night on BBC2, which deals with the explosion of the game into UK popular culture in the 1980s, and the huge celebrities and controversies it created.

So what were the origins for this new species? Some might point back all the way to naturalist David Attenborough, who as a Controller of Programming for the BBC first commissioned the short-format ‘Pot Black’ show in 1969.

Then there was the emergence of Alex ‘The Hurricane’ Higgins from Belfast in Northern Ireland, the classic ‘flawed genius’ whose snooker was as every bit intoxicating as the vodka that was seldom far from his side.

Higgins shook the game to its core, upsetting rivals, the governing body and legal authorities alike, but carried high on a wave of public adoration as the ‘People’s Champion’. You could argue that no other single player did more to sow the seeds for the revolution, or put money in the pockets of today’s players, with earnings for the likes of world No1 Judd Trump up to £1million a year.

Higgins, whose tears as he called for baby Lauren after his 1982 world title win became an iconic image, was on a par with George Best, or in later years Gazza – lacking all discipline, impossible to manage and control.

But despite the fines, assault is generally forgiven for his unique talent.

Steve Davis, who was managed to six world titles by Hearn and mercilessly lampooned by hit satirical 1980s show ‘Spitting Image’ for being boring, said, “I decided if you were going to get good at something as a kid, it would be by having no other distractions. 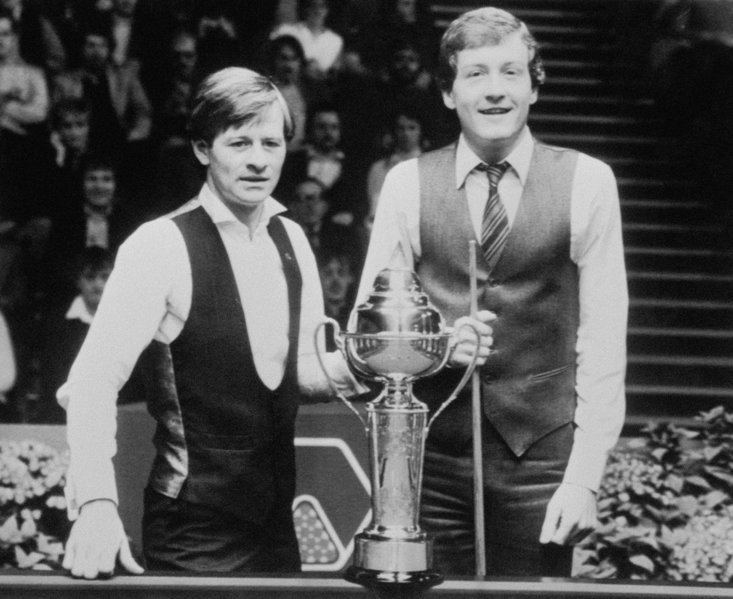 Alex Higgins And Steve Davis in 1983

“Therefore if you were born ugly, ginger hair, bit of dandruff, with no personality, it was very unlikely as a teenager you were going to want to start going out to nightclubs.

“And that you’d much prefer to be in a dark room without mirrors practising knocking the white ball up and down the spots for eight hours a day.”

Or as Match of the Day presenter Gary Lineker, one of many excellent talking heads and a huge snooker fan at that time observed, “Steve Davis was a genius that wasn’t flawed.”

Journalists involved at the time in putting snooker on the back and sometimes front pages certainly add something to the programme, absent from a recent BBC documentary celebrating 40 years at the Crucible from when the Betfred World Championship arrived in 1977.

And the hits keep coming. Dennis Taylor’s final-black victory over Davis in the 1985 Crucible final was watched by 18.5million viewers despite finishing after midnight.

Tony Knowles, the ‘Bolton Stud’ popular with an army of female fans, was fined for bringing the game into disrepute for saucy stories and photoshoots with women in various states of undress in the tabloids.

There is amazing footage of the World Championship trophy from 1982 being ‘kidnapped’ by a driver trying to secure payment for himself during an exhibition tour with Higgins and Jimmy White, after a promoter ran off with all the cash.

And Higgins was fined £12,500 and banned for five tournaments in 1986 for assaulting official Paul Hatherall at the UK Championships.

The Hurricane’s natural heir always looked like being Jimmy ‘Whirlwind’ White, and so it proved. White had Higgins’ flair on the table, and appetite for chaos and living life to the full off it.

For all the stories of drink, drugs and gambling  - and cocaine and for a short while even crack threatened to take a firm hold of White - the tale of him flipping over and sinking a speedboat during a tour of Hong Kong, forcing he and passenger Steve Davis to swim back to shore, is another highlight.

This correspondent’s own personal live experiences of Alex Higgins are relatively limited. I went to the old Wembley Conference Centre in 1988 to see him beat Tony Knowles 5-4 in front of a sell-out 2,500 baying mob that resembled an away terrace at a football match. The atmosphere was electric.

And the last time I saw him was sitting quietly in the back row of a West End theatre, in his trademark fedora, watching the excellent one-man show by Richard Dormer about the Hurricane’s turbulent life. Initially opposed to the project, Higgins ended up attending 15 times.

Gods Of Snooker’ is a three-part BBC documentary made by Louis Theroux’s Mindhouse production company. The first episode airs on Sunday, May 9th at 9pm on BBC2