Lifting the Challenge Cup for the fourth time in eleven seasons will not be enough for Warrington Wolves.

They want more and, even before the raucous celebrations got underway at Wembley on Saturday after their 18-4 win over St Helens, Steve Price was talking about doing the double.

Not since 1955 have the Wolves been crowned champions of England but it is surely only a matter of time before that drought ends.

There is too much energy and too much drive at the Halliwell Jones Stadium, from top to bottom, for Warrington not to be competing for the game's major honours and winning them.

With rugby league's oldest and most famous trophy now in the bag, attention will turn to reaching Old Trafford and claiming a maiden Grand Final success in October.

Australian Price, who tasted defeat at Wembley and Old Trafford in his debut season last year, said: "We've got a special group of men and we're going for the big one (Super League title) at the end of the season as well.

"There are special times ahead and we have got a lot of belief and confidence going forward now.  All the pressure was on St Helens. They have been the most consistent team for the last eighteen months, and it took a special performance to beat them. I'm just really proud of my Warrington team."

Wolves co-captain Chris Hill was in tears after the game and with good reason.

The England prop lifted the Challenge Cup in his first season at Warrington with victory over Leeds in 2012. He had since lost twice more at Wembley and in four Super League Grand Finals, so the outpouring of emotion was understandable. "I can't believe it, our plan was outstanding and to do it with these boys is special," said Hill.

"We know we've got a team here, we've probably not shown it in the last few weeks and everyone wrote us off. You don't get moments like this very often and to pick up that trophy up on behalf of these lads is unbelievable.

"Pricey has been rebuilding since he came in, not just the squad but the whole club. He's done really well with resting and rotating lads to keep everyone happy and he's taken a lot of players to the next level, such as Joe Philbin.

"There is a bigger focus on the youth and more and more young lads are banging on the door now. My son is 10 and plays for Golborne and I take him around Warrington where there a lot of very good junior clubs with so much talent on show that Warrington as a club need to be tapping into.

"Next year, bringing back the reserves will be a big thing and everyone at the club has come closer together - the players, coaching staff and everyone behind the scenes working in the offices.

"There aren't three or four teams going in different directions, everyone is pulling together as one.Steve is a big believer in our families being happy at home, so we do a lot of fun days with our wives, girlfriends and kids.

"We'll all get together at Christmas and do an Easter egg hunt at Easter, which is really nice and again, it brings everyone closer. There are good things happening on and off the field - Steve has changed the entire culture at the club."

Nobody epitomised the Wolves' desire more than hooker Daryl Clark, whose relentless performance earned him the Lance Todd Trophy as Man of the Match.

The England international lost at Wembley with Castleford in 2014 before suffering defeat with his current employers in 2016 and 2018.

"I have been here three times before and not picked up the trophy, which is heartbreaking," Clark said. "To finally get my hands on it is special and to win the Lance Todd Trophy as well just tops it off."

Warrington were missing key playmaker Blake Austin through injury and runaway Super League leaders Saints were at full strength. Yet Price's gameplan worked to perfection and tries from Joe Philbin and Ben Murdoch-Masila put them 12-0 up at the break.

St Helens hit back through Theo Fages but Clark, fittingly, had the final say when he capitalised on his opponents' latest error to score a third Warrington try. Clark added: "We went under the radar all week. We stuck to our gameplan and we had a good feeling in camp. We knew we could shock everyone."

The challenge now for Price and his men is to reach Old Trafford again and this time emerge victorious. After their performance at Wembley on Saturday, you would not rule it out.

Warrington Wolves
@WarringtonRLFC
What a feeling! 💛💙 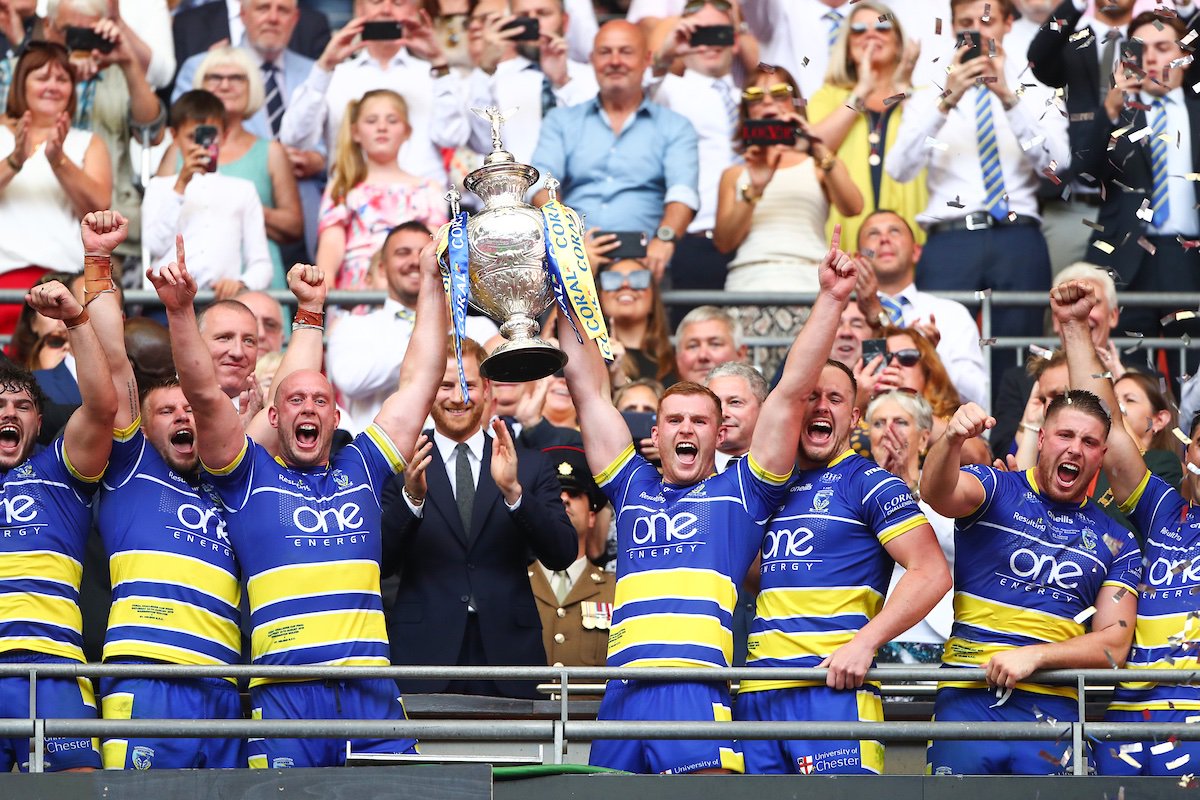