There are times when casual observers forget just how good a player John Parrott really was in his pomp. You often hear sweeping generalisations about Steve Davis dominating the 1980s, and then Stephen Hendry doing the same in the 1990s. And there is usually a nod to Dennis Taylor’s shock 1985 Crucible final win, and perennial Sheffield bridesmaid Jimmy White.

But 1991 was unquestionably the year of the Liverpudlian, when Parrott - a winner of nine ranking titles in his career - was at the peak of his considerable powers, even if bizarrely he did not quite ascend to No1 in the rankings.

He played brilliantly at the World Championship, beating Tony Knowles 13-1, Terry Griffiths 13-10 and Steve Davis 16-10 before outplaying the Whirlwind in the final for an 18-11 triumph and a trophy he had to parade at Anfield rather than Goodison Park - home of his beloved Everton - because the Blues were playing their final league game away from home. ​​​​​​

But for all that, when November came around Parrott was desperate to add the UK Championship, the second-biggest of the three Majors, to his CV for special, personal and geographical reasons. The tournament took place at the Guild Hall in Preston – a venue with particular resonance and meaning for Parrott.

Parrott, now 57, recounts: “Funnily enough the UK was probably the one I wanted to win more than anything when I first started out. I went there with my father to watch, the first time I had gone to a big tournament when I was about 14 at the Guild Hall and looking on it confirmed to me I wanted to be a professional player.

“It was local for me, 40 minutes up the road and I went back frequently after that. I remember Willie Thorne beating Dennis Taylor on the next table in the second round, and then I played Willie in the next round and won that one. Then it was Dean Reynolds, before James Wattana in the semis who was a real nightmare at the time, and very hard to play against. He always played well against me.

“Jimmy had beaten Stephen Hendry 9-2 in the other semi-final and I knew he was in good form. And it was one of those in the final. He probably thought he was the favourite, and I thought I was the favourite. We were both at our peak, really. I think in our career our head to head was almost level.

“It was a great final, I made an 80-odd to clinch it and looked up to see my dad in his white shirt with as big smile on his face and thinking ‘Yeah…that was the one I wanted’. 13 years later on from being in the crowd I am looking up at virtually the same chair where my dad was, this time holding the trophy. It was pretty special. Jimmy did get his revenge on me in the UK final 12 months later.

“In 1991 I was just at my peak, all the years of experience kicked in and it came together, I took a little while to get there. I found it harder to miss that year, I was so tuned up and had a fantastic new cue. I could have held all three majors at the same time, but lost to Stephen Hendry in the Masters final in 1992. That was one regret, not winning the Masters.

“I was a pretty good all-round player. I could play safe, you got introduced early to the baulk cushion up against Terry and Cliff Thorburn and Steve Davis and everyone. But I could score , too. My temperament was okay though I could shake my heads with the best of them, but I always tried and was punching away and doing my best, and I was okay in final-frame deciders.

When Ronnie O’Sullivan blew through the sport, Parrott was one player he struggled to break down. The Merseysider finished with a rare 8-4 career winning record against the Rocket. Parrott added: “I always enjoyed playing Ronnie and think I had the right attitude against him. I thought I’d get chances, and just had to score heavily against him and show him you were there to play. My record was good, and it was 8-2 until the last couple of years when he got a couple back.

“There were great players in my era – Steve Davis, Stephen Hendry, Jimmy White and myself, and I was No2 in the world for three years up against that lot! There was an event in Monaco when I beat the three of them in the draw…and I know that at my peak playing well I was okay. Maybe I was a bit like Steve Cram, when you had Sebastian Coe and Steve Ovett out there!”

You would struggle to spend time with anyone who loves their sport more and will spend hours shooting the breeze about it than Parrott, whether it is football and Everton, golf, or national hunt horse racing. Parrott, who has a family link with current Everton assistant boss and former Toffees playing legend Duncan Ferguson, said: “We are struggling a little at the moment, with a squad that isn’t very good – a handful of players you’d keep, and the rest are not quite up to it after some mis-spending. But we have to stick it out and maybe sell to go forward.

“And then you have the other lot over the way who are just a very, very good team, with a good manager and a far superior recruitment process. It would be churlish to say anything else. 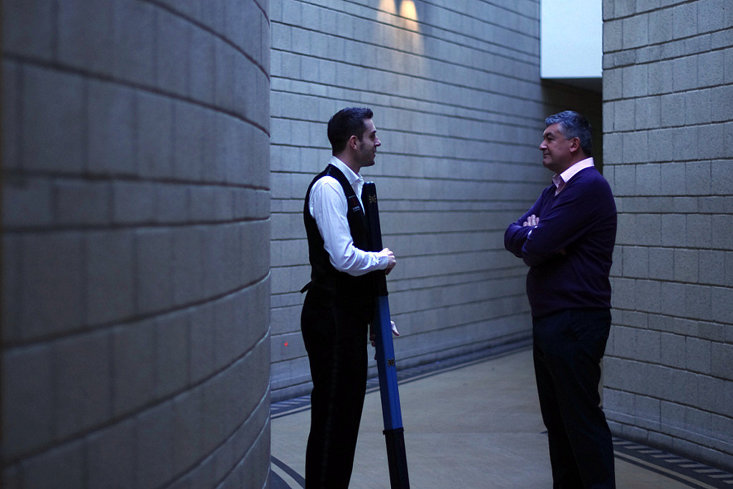 “I love my golf and have been fortunate to play a lot of wonderful courses. For my 50th birthday my wife took me to play Pebble Beach, to tee it up there was special. It is a great golf course and sense of occasion. I love getting in the car and going up to Scotland, or on the boat and over to Ireland to play some of the fantastic links courses. I did Ballybunion, Doonbeg and Lahinch in Ireland, you’d struggle to get a better trip than that. There is an amazing sense of history at St Andrew’s, and nearer home I have Formby and Birkdale.

“And of everything probably jump racing is my favourite. I read it all every day, I have Racing UK in the house and back a few winners. But I am as happy at Bangor on Dee with no stand as I am at any of the big tracks like Cheltenham, if it’s good quality racing. There are only four or five courses in Britain I haven’t done – Fontwell, Yarmouth, Market Rasen and Ffos Las are on the list.”

x
Suggested Searches:
Manchester United
Liverpool
Manchester City
Marcus Rashford
Premier League
More
snooker
Shaun Murphy: Return To German Masters Feels Like A Huge Moment...
Shaun Murphy admits that seeing this week’s German Masters returning to Berlin feels like a huge [ ... ]
snooker
Prince of Persia: Iran’s Hossein Vafaei Wins The Snooker Shootout...
Snooker’s Prince of Persia Hossein Vafaei proved himself to be king of the Shootout on Sunday [ ... ]
snooker
John Higgins Desperate To Attract New Fans To 'Stuck In The...
Snooker star John Higgins would love to see an influx of new fans in the sport before he hangs up his [ ... ]
snooker
15-Year-Old Schoolboy Wildcard Stan Moody Is A Shoot Out Sensation
Schoolboy Stan Moody claimed a sensational debut big-tournament victory at the quickfire Shoot Out on [ ... ]
snooker
Peter Devlin Raps On Stage Alongside Jessie J In Snooker Shoot...
Peter Devlin hopes he can perform on the Shootout stage as well as he did with singer Jessie J earlier [ ... ]
snooker
18.5m Viewers And Upside-Down Glasses: Dennis Taylor Ruled Snooker...
Snooker may never quite see another high-watermark like the 1985 World Championship final with its 18.5million [ ... ]
snooker
Neil Robertson: Other Tournaments Need To Match Incredible Ally...
Neil Robertson has urged the Crucible crowd to up their game as a spectacular Masters spectacle this [ ... ]
snooker
Neil Robertson Builds On Australian Ashes Success With Masters...
Neil Robertson piled Masters success on Ashes misery as the latest Australian to demolish England’s [ ... ]
snooker
Barry Hawkins Digs Deep To Book Masters Final Showdown With...
Barry Hawkins took his place in the Masters final after coming through yet another Alexandra Palace [ ... ]
snooker
Paul Hunter: The Great Man The Masters Trophy Is Appropriately...
Among many poignant moments at the 2022 Masters at Alexandra Palace, one perhaps stood out above all [ ... ]
snooker
Robertson Wins Masters Thriller To Reach Final But Celebration...
Neil Robertson produced an astonishing comeback to reach the Masters final by beating Mark Williams [ ... ]
snooker
World Number One Mark Selby To Seek Help Over Mental Health...
World No1 Mark Selby has revealed he will be seeking help over the current state of his mental health. [ ... ]
snooker
Neil Robertson Vows To Jump In Icy Alexandra Palace Lake If...
Neil Robertson has vowed to jump into the icy Alexandra Palace boating lake if he wins a second Masters [ ... ]
snooker
Judd Trump Insists Masters Atmosphere Is More Like Boxing Than...
Judd Trump laid out rival Kyren Wilson with a series of hammer blows on Friday – and then insisted [ ... ]
snooker
Masters 2022: Williams Edges Out Old Rival Higgins In An Alexandra...
Both Mark Williams and John Higgins testified to one of the most extraordinary atmospheres ever seen [ ... ]
snooker
Neil Robertson: Ashes and Michael Jordan Inspired Me Against...
Australia’s Neil Robertson took inspiration from both the Ashes and sporting legend Michael Jordan [ ... ]
snooker
Kyren Wilson Relishing Masters Clash With Rival Judd Trump
Kyren Wilson became the second man to scrape into the Masters quarter-finals on Wednesday – as [ ... ]
snooker
Judd Trump Edges Into Quarter-Finals But Mark Allen Still Smiling...
Mark Allen was still smiling on Wednesday night despite an agonising Masters final-frame defeat to Judd [ ... ]
snooker
Masters 2022: Snooker’s Class Of 1992 Still Thrilling Crowds...
All three of snooker’s famous Class of 1992 of Ronnie O’Sullivan, John Higgins and Mark [ ... ]
snooker
Ronnie O'Sullivan Wows Rolling Stones Pal Ronnie Wood With Masters...
Ronnie O’Sullivan wowed Rolling Stone Ronnie Wood as the Rocket got his bid for an eighth Masters [ ... ]
snooker
Shaun Murphy: Masters Defeat Is Just More Pain On Top Of Back...
It wasn’t just the pain of a disappointing Masters first-round defeat to Barry Hawkins that was [ ... ]
snooker
Ranking The Five Greatest Masters Finals - Featuring Williams,...
There were some near misses, and I have chosen to leave out the superb comeback victory for a 39-year-old [ ... ]
snooker
Masters 2022: History-Making Higgins Books His Place In The...
John Higgins made history when he walked out against reigning UK champion Zhao Xintong at the Masters [ ... ]
snooker
Fired-Up Mark Williams Defeats Wayward Defending Masters Champion...
Defending Masters champion Yan Bingtao had a bad start to his Sunday, getting lost while being [ ... ]
snooker
The Constant Uncertainty Surrounding Djokovic Could Impact His...
Detained and then isolated at Melbourne Airport on arrival from the Middle East, Novak Djokovic has [ ... ]
snooker
Steve Davis Looks Back At His Stunning Masters Win Over O’Sullivan...
Steve Davis still believes his last major tournament win owed plenty to a streaker breaking Ronnie O’Sullivan’s [ ... ]
snooker
Changing Of The Guard: China’s Hopes For Snooker Domination
When Ding Junhui burst onto the snooker scene in spectacular fashion in 2005, many expected the Chinese [ ... ]
snooker
Masters Preview: Can Chinese Whizkid Yan Bingtao Defend His...
Snooker’s big guns will be out in force for this year’s Masters (9-16 January) and for defending [ ... ]
snooker
Ken Doherty - 25 years On From His Greatest Triumph At The Crucible
Ken Doherty will head back to the Crucible Theatre later this year to celebrate the 25th anniversary [ ... ]
snooker
Snooker’s Original ‘Grinder’ Cliff Thorburn Ready To Call It...
Snooker’s original ‘Grinder’ Cliff Thorburn admits he is finally ready to pack away [ ... ]