In sport and especially in Britain we love the story of the plucky loser. It's as if we like the idea of the underdog who gets close to the winning line, only to fall just short, leaving the favourite to show their class and produce the dramatic moment of victory.

On Sunday night Northern Ireland's Jordan Brown failed to stick to his role as supporting act, showing incredible nerve and composure to produce one of the greatest shocks we've ever seen in a major final. Not only did he play the best snooker of his career, he did it exactly when he needed to against the greatest player in history.

This time it was Ronnie O'Sullivan's turn to play the gracious loser in Wales and in fairness to the 37-time ranking event winner, it was a role the Rocket carried out with dignity and humility in his post match interview.

Five years ago, Brown was working full time in a petrol station, practising in his evenings and time off. He himself had said he was making some less than positive decisions away from the sport and the possibility of a far less rewarding life was beginning to open up but with help from friends, family and 2018 Masters Champion Mark Allen, things began to turn around for the four-time Northern Ireland amateur champion.

He grafted his way back onto the Tour which proved hard going and he saved his professional status last July, qualifying for his maiden appearance in the World Championship at the Crucible. It's a right of passage for all players and there was no disgrace in his 10-6 defeat to three-time champion Mark Selby in the first round. Crucially, though, something had begun to click for the 33-year-old, who built on that performance with a run to the quarter finals of the German Masters at the end of last month. But no-one could have predicted the life defining week he was to have in Wales.

BBC Sport Wales
@BBCSportWales
He's done it… what a moment for Jordan Brown!
The Northern Irishman has caused a massive upset to beat Ronnie O'Sullivan in the Welsh Open final at Celtic Manor
He was a 750/1 outsider at the start of the tournament
📺 BBC Two Wales
💻
123
1044

He started off well with a 4-0 win over China's Luo Honghao and then things just got better and better. En route to the final he won four final frame deciders and dispatched quality names including Mark Selby, thereby avenging his defeat in Sheffield last summer.

And so to the showdown with O'Sullivan. Ronnie had only lost two frames on the path to the final and many were predicting he would thrash the World number 81 and secure a record equalling fifth Welsh Open title. But it was Brown who settled quickest racing to a lead of four frames to one, appropriate for a man sometimes referred to as "The Antrim Ferrari."

Everyone was waiting for the champion's response and it duly came with brilliant back to back centuries from the 45-year-old Essex Cueman. Suddenly Brown's lead was cut to 4-3.

He had to dig in to take the last frame of the afternoon and after dinner we all regrouped for the evening session with the Northern Irishman leading 5-3. I've covered snooker for 14 years now and although I've commentated before, this was the first time I had been given the chance to be in the box for the climax of the final. As I picked up the microphone, I could feel the tension in the air from the arena floor.

Was O'Sullivan going to turn the screw for the familiar outcome or was something incredible on the cards?

The first frame of the evening was huge and somehow Ronnie won that and the next two. 6-5 up. All of a sudden he'd won three-in-a-row and was leading for the first time in the match, just three away from the nine required for the winning line. Surely that's the moment the first-time finalist crumbles, consoled by a handsome runner's up cheque and a very respectable 9-5 scoreline against the games great?

Not so said Brown. He had different ideas.

Where many have folded so often before against Ronnie O'Sullivan, the man from Antrim kept his cool under immense pressure. As he had done for all those years in the sporting wilderness, he kept believing and kept pushing for an opportunity to get back in the match. It came and the door to a brilliant win was ajar. 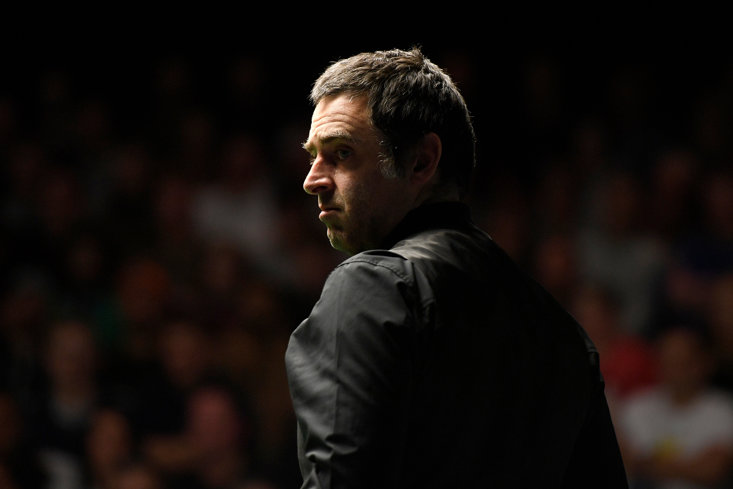 Amazingly he won four of the next five frames for an 8-7 lead. One break, one chance and he would be over the line. But it was as if this was destined to go the full distance.

A double kiss on a red in what turned out to be the penultimate frame left O'Sullivan a chance and he seized it with both hands.

An incredible break of 119 taking us all the way.

People may think commentators are somewhat detached from the raw excitement and emotion of these occasions. That's absolutely not the case. Of course you have to maintain some level of neutrality, but the sheer drama of what was unfolding was infectious.

Having followed the Tour for the last decade and more, I have a little insight into how lonely it can be for them when things are not going well. I genuinely care about these guys and the sport that has enabled me to carry on earning a good living for my wife and son over the last 10 months. My heart was pounding.

So imagine the adrenalin, excitement and fear that must have been pumping through Jordan Brown's body! Whatever it was, he harnessed it for one last push.

Every snooker player in the world will tell you all they ask for in a final frame is a chance. What they then do with it is up to them. The outsider from Antrim seized his, compiling a break of such composure and bravery it must have been agonising for his friends and family to watch back home.

As soon as he potted the winning match ball, he allowed himself a fist pump and in the context of what he had just done, O'Sullivan would not have taken offence. Then came tears of realisation as the magnitude of what he achieved began to dawn on him.

After scraping myself off the ceiling of the comms box I grabbed the arena microphone and headed out for the live post match interviews by the table.

The two men deserved a standing ovation, but they had to make do with fake applause. No matter. Anyone who had sat transfixed at home had witnessed a match for the ages.

It can't be easy giving a live losing interview and, unusually for Ronnie, it was his third of the season. Considering he was the overwhelming favourite, he was very generous - In fact I would say it's probably the most gracious he's ever been after losing a final. The World Champion showed his class and deferred attention to the performance of the evening's leading man.

Jordan was tearful when he thanked his coach, girlfriend and father and looked like he was dreaming when I reminded him he now joins Dennis Taylor, Alex Higgins and Mark Allen as the only four men to have won a ranking title for Northern Ireland. It couldn't have happened to a nicer bloke.

Now we have to wait and see if it was a one off or merely the springboard for a career defined by a dogged determination to never give up. Whatever he goes on to achieve now, in some ways his week in Wales will never be topped.

This will surely be the win he'll tell his grandchildren about - come to think of it so will I. It was one of those nights.