Snooker
News
“I developed a tremor after my first Covid vaccine. I was worried whether I would ever get back to full health again.
Hector Nunns
19:10, 12 Apr 2022

The 28-year-old from Perth was the first player to come through ‘Judgement Day’ at the Betfred World Championship qualifiers on Tuesday with a 10-1 drubbing of Liverpool’s Allan Taylor.

The only other time Scot Donaldson made it through to the final stages was three years ago – when he lost to Kyren Wilson in the first round.

Results this season have been poor until this huge boost – but Donaldson, whose ranking has slipped to No49 from a high of 22, insists there are good reasons for being happy just to be playing.

Donaldson, who had been the favourite to come through and be in Thursday's draw in with the big guns, said: “Despite the results before this, it has probably been my best ever season.

“I developed a tremor after my first Covid vaccine and it knocked me out for a long, long time. I was worried whether I would ever get back to full health again.

“So to be out there playing and feeling strong and able to get down on my shots properly…put it this way, it gives you great perspective when you haven’t had your health.

“It affected my whole life, and my confidence in all areas, not just snooker. I wasn’t healthy for a long time, and it wasn’t nice. It was my whole body, not just my hands.

“I was playing at the British Open  and my hand was on the cushion and I just couldn’t stop it shaking, and your confidence ebbed away.

“Three months down the line it was still there so of course I might have it for the rest of my life, and after getting treatment it was a massive relief when it stopped.

“And so for me to get to this point I regard it as my best ever season, and best ever achievement in total in my career.

“Now winning and losing seems less important. It’s not something I had spoken about in public before, but the UK Championships in November was the first time I felt good all season.

“Before that whenever I got down on shots I got the shakes. I don’t know exactly what it was but went to see a neurologist and he confirmed it was the Covid vaccine that gave me the tremor.

“And I’m not anti-vaccine at all, I’ll take one for anything – it was just unfortunate, I think. I am delighted though, over the moon to have got back to the Crucible.

“I played really well all day. The last time I qualified I was 9-4 up before getting pegged back to 9-9 and then winning the decider. So it was nice to get it done easy this time.

“It is impossible to keep your nerves under control in this final qualifier. You just have to accept you will be extremely nervous, but still go out and play. Once you start though, it’s not so bad.

“I don’t really know what favourite means in this game. I have been favourite so many times in snooker and the other guy hasn’t missed a ball.

“So that’s why I don’t really look at draws any more – and I won’t be watching this one for the first round. I’ll probably go for walk, maybe you’ll find me up in the Cairngorms.”

Live Snooker
@Livesnooker
𝗤𝗨𝗔𝗟𝗜𝗙𝗜𝗘𝗥 🏴󠁧󠁢󠁳󠁣󠁴󠁿
Scott Donaldson became the first player to progress through this year's qualifiers after a 10-1 demolition of Allan Taylor to reach The Crucible for the second time!
#JudgementDay 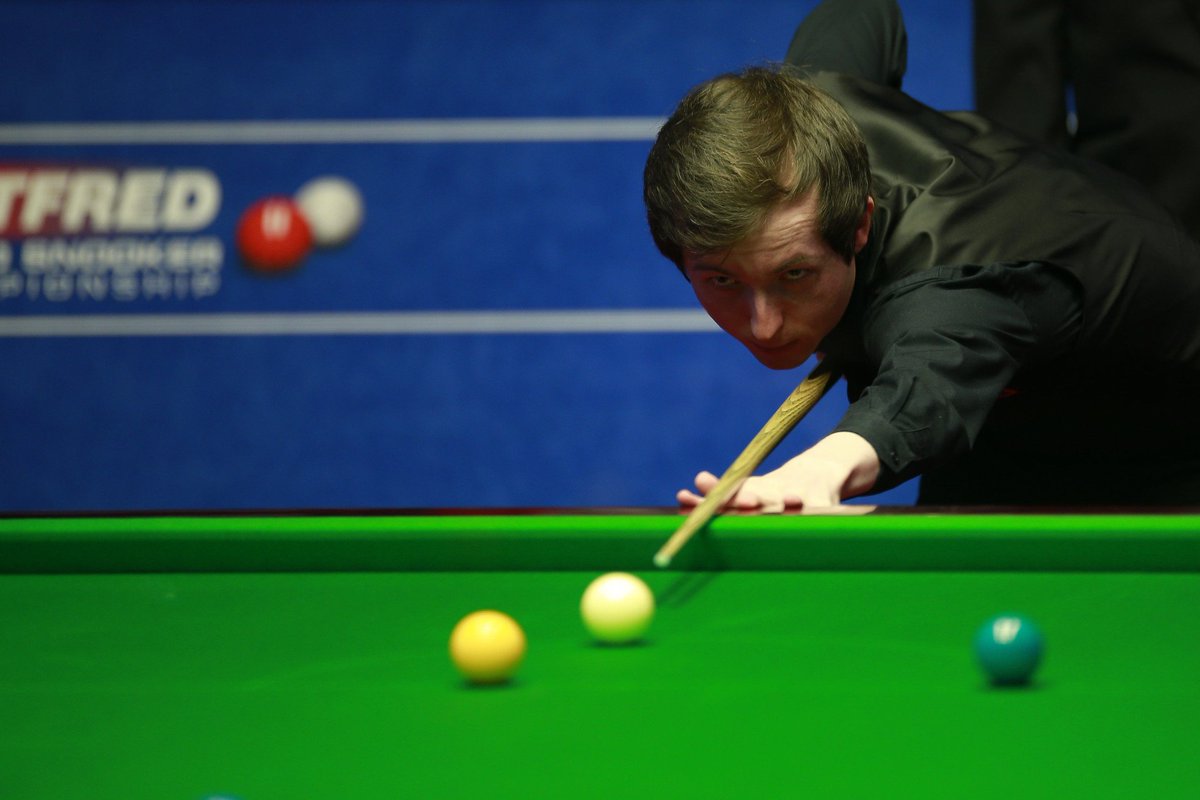 The final qualifying round matches are generally dripping with tension – but Donaldson could hardly have wished for a better start.

After nabbing the first two frames for an early 2-0 lead he then found some fluency and rhythm, and breaks of 132, 68 and 96 put him firmly in charge at 5-0 ahead.

He suffered a mini-setback in frame six, where a break of 55 was not enough to prevent Taylor finally getting on the board.

But another effort of 55 got him back on track and the onslaught continued as he piled on the misery for the Liverpool player by taking the last two of the session.

That meant Donaldson taking a seemingly impregnable 8-1 lead into the evening frames. And he kept his foot on Taylor’s throat – swiftly completing a 10-1 rout.

Meanwhile China’s Lyu Haotian was not far behind the Scot as he secured his own place in the final stages at the iconic Sheffield theate with a 10-4 win over veteran Dominic Dale.

Lyu, 24, has played at the Crucible twice before and he was always in charge against Welshman Dale, who got a bye into the final match after Liang Wenbo was suspended after his conviction on a domestic assault charge.