Ken Doherty will head back to the Crucible Theatre later this year to celebrate the 25th anniversary of one of Ireland’s great sporting triumphs.

The 52-year-old from Dublin won the World Championship in 1997 by halting the dominant Stephen Hendry’s bid for a sixth world title in a row.

That famous 18-12 victory saw Doherty welcomed home with an open-top bus parade through Dublin, and police chiefs telling him crime stopped in the city for hours during the crucial frames.

And in action this week at the UK Seniors Championship in Hull, Doherty recalled his greatest Sheffield memory ahead of what will be a special evening with Hendry and others in the summer.

Doherty said: “I suppose the 5th May 1997 is the day that defined my life really – wherever you go after that day you are referred to as the world champion.

“When I saw Alex Higgins win it in 1982 I knew I wanted to be a snooker player, and then there was Dennis Taylor also from Northern Ireland in 1985.

“So to emulate them and win it weas a dream come true, and especially to beat Stephen in the final who was going for six in a row and hadn’t lost there for so long. That was the icing on the cake.

“25 years…the time has gone quick. The open-top bus was just unbelievable, that’s something you get for the Ireland football team or Olympic heroes – not snooker. But it had that impact.

“Coming in to the 1997 World Championship I had had an okay season, but the immediate run-up wasn’t great with three-first-round defeats and my confidence was low.

“So I decided to ask Ronnie O’Sullivan for some serious practice at the club in Ilford, which we hadn’t really done, just for the Crucible.

“So every day for two weeks we played really hard, best-of-19s, even two best-of-19s if they went quick, and more often than not against Ronnie they did go quick.

“And it meant we both went to Sheffield really sharp. Ronnie of course made that incredible maximum 147 that year in just over five minutes.

“And after a slow first match against Mark Davis where I scraped through, there was a weight off, I beat Steve Davis, John Higgins, Alain Robidoux and then Stephen.

“Even though it was my first world final the fact I had beaten him in other finals took away some of the fear factor for me. I was a huge underdog, but I really went out to enjoy it.

“It was like his home table, he was so calm and confident out there, and he made three centuries in the first session – but I showed him I was confident too. 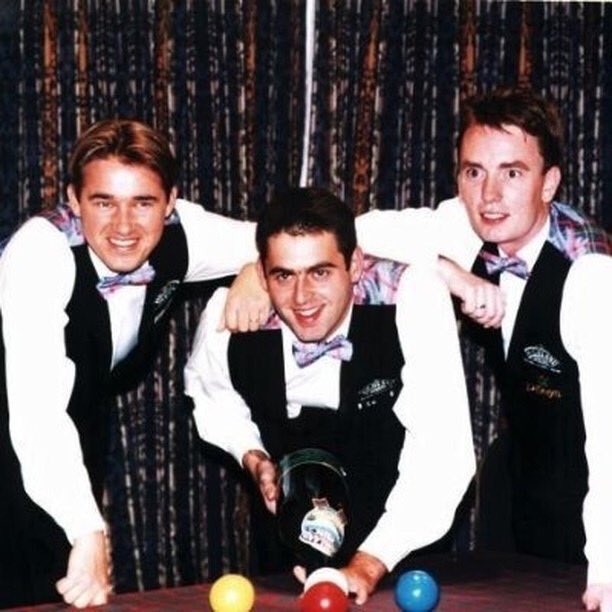 “But I am going to entice Stephen to come back to the Crucible for a special night to celebrate the 25th anniversary of me winning it.

“He can talk about his great defeat! But we’ll get Dennis Taylor and John Virgo along too, and there will be a lot of funny stories. But hopefully I can qualify one last time to play there before then.”

Doherty last appeared on the sport’s most iconic stage back in 2014, but since then has not managed to get through the incredibly tough qualifying process for all those no longer in the elite top 16 in the world rankings. On that occasion he famously knelt down after walking through the curtain and down the stairs into the arena, and kissed the carpet.

But although 1997 was the high-water mark in his many happy years spent in Sheffield, there were other, earlier memories that also survive the passing of the years.

Doherty added: “The first time I made it there as a player was 1991 – I did go once as a 14-year-old as a competition winner – I am there sitting next to the great Steve Davis playing him in the first round. I was so nervous and intimidated being next to one of the game’s greatest legends.

“And then in 1994 I played Alex Higgins in the first round, the last time he ever played got to the Crucible in the World Championship. It was a match I didn’t enjoy too much. It was very exciting to play him, but he was on the way down and he was arguing with John Williams the referee.

“He was telling the ref to move, and when John said ‘Alex, I’m not in your line of sight’ Higgins memorably said ‘No, but you’re in my line of thought’! He was drinking as the match went on, and it was a bit of a hollow victory as he was my hero growing up and I will always revere him. He brought me into snooker.”

x
Suggested Searches:
Manchester United
Liverpool
Manchester City
Marcus Rashford
Premier League
More
snooker
15-Year-Old Schoolboy Wildcard Stan Moody Is A Shoot Out Sensation
Schoolboy Stan Moody claimed a sensational debut big-tournament victory at the quickfire Shoot Out on [ ... ]
snooker
Peter Devlin Raps On Stage Alongside Jessie J In Snooker Shoot...
Peter Devlin hopes he can perform on the Shootout stage as well as he did with singer Jessie J earlier [ ... ]
snooker
18.5m Viewers And Upside-Down Glasses: Dennis Taylor Ruled Snooker...
Snooker may never quite see another high-watermark like the 1985 World Championship final with its 18.5million [ ... ]
snooker
Neil Robertson: Other Tournaments Need To Match Incredible Ally...
Neil Robertson has urged the Crucible crowd to up their game as a spectacular Masters spectacle this [ ... ]
snooker
Neil Robertson Builds On Australian Ashes Success With Masters...
Neil Robertson piled Masters success on Ashes misery as the latest Australian to demolish England’s [ ... ]
snooker
Barry Hawkins Digs Deep To Book Masters Final Showdown With...
Barry Hawkins took his place in the Masters final after coming through yet another Alexandra Palace [ ... ]
snooker
Paul Hunter: The Great Man The Masters Trophy Is Appropriately...
Among many poignant moments at the 2022 Masters at Alexandra Palace, one perhaps stood out above all [ ... ]
snooker
Robertson Wins Masters Thriller To Reach Final But Celebration...
Neil Robertson produced an astonishing comeback to reach the Masters final by beating Mark Williams [ ... ]
snooker
World Number One Mark Selby To Seek Help Over Mental Health...
World No1 Mark Selby has revealed he will be seeking help over the current state of his mental health. [ ... ]
snooker
Neil Robertson Vows To Jump In Icy Alexandra Palace Lake If...
Neil Robertson has vowed to jump into the icy Alexandra Palace boating lake if he wins a second Masters [ ... ]
snooker
Judd Trump Insists Masters Atmosphere Is More Like Boxing Than...
Judd Trump laid out rival Kyren Wilson with a series of hammer blows on Friday – and then insisted [ ... ]
snooker
Masters 2022: Williams Edges Out Old Rival Higgins In An Alexandra...
Both Mark Williams and John Higgins testified to one of the most extraordinary atmospheres ever seen [ ... ]
snooker
Neil Robertson: Ashes and Michael Jordan Inspired Me Against...
Australia’s Neil Robertson took inspiration from both the Ashes and sporting legend Michael Jordan [ ... ]
snooker
Kyren Wilson Relishing Masters Clash With Rival Judd Trump
Kyren Wilson became the second man to scrape into the Masters quarter-finals on Wednesday – as [ ... ]
snooker
Judd Trump Edges Into Quarter-Finals But Mark Allen Still Smiling...
Mark Allen was still smiling on Wednesday night despite an agonising Masters final-frame defeat to Judd [ ... ]
snooker
Masters 2022: Snooker’s Class Of 1992 Still Thrilling Crowds...
All three of snooker’s famous Class of 1992 of Ronnie O’Sullivan, John Higgins and Mark [ ... ]
snooker
Ronnie O'Sullivan Wows Rolling Stones Pal Ronnie Wood With Masters...
Ronnie O’Sullivan wowed Rolling Stone Ronnie Wood as the Rocket got his bid for an eighth Masters [ ... ]
snooker
Shaun Murphy: Masters Defeat Is Just More Pain On Top Of Back...
It wasn’t just the pain of a disappointing Masters first-round defeat to Barry Hawkins that was [ ... ]
snooker
Ranking The Five Greatest Masters Finals - Featuring Williams,...
There were some near misses, and I have chosen to leave out the superb comeback victory for a 39-year-old [ ... ]
snooker
Masters 2022: History-Making Higgins Books His Place In The...
John Higgins made history when he walked out against reigning UK champion Zhao Xintong at the Masters [ ... ]
snooker
Fired-Up Mark Williams Defeats Wayward Defending Masters Champion...
Defending Masters champion Yan Bingtao had a bad start to his Sunday, getting lost while being [ ... ]
snooker
The Constant Uncertainty Surrounding Djokovic Could Impact His...
Detained and then isolated at Melbourne Airport on arrival from the Middle East, Novak Djokovic has [ ... ]
snooker
Steve Davis Looks Back At His Stunning Masters Win Over O’Sullivan...
Steve Davis still believes his last major tournament win owed plenty to a streaker breaking Ronnie O’Sullivan’s [ ... ]
snooker
Changing Of The Guard: China’s Hopes For Snooker Domination
When Ding Junhui burst onto the snooker scene in spectacular fashion in 2005, many expected the Chinese [ ... ]
snooker
Masters Preview: Can Chinese Whizkid Yan Bingtao Defend His...
Snooker’s big guns will be out in force for this year’s Masters (9-16 January) and for defending [ ... ]
snooker
Snooker’s Original ‘Grinder’ Cliff Thorburn Ready To Call It...
Snooker’s original ‘Grinder’ Cliff Thorburn admits he is finally ready to pack away [ ... ]
snooker
Graeme Dott Believes Stephen Hendry Will Be ''Much Better''...
Former world champion Graeme Dott has backed Scottish snooker legend Stephen Hendry to do some serious [ ... ]
snooker
World Number One Mark Selby Won’t Rest While There’s Still History...
Mark Selby insists there is no chance he will ever rest on his snooker laurels while there are titles [ ... ]
snooker
750-1 Upsets, Breakout Stars & World Class Wins: Snooker's Best...
Snooker like all sports to a greater or lesser degree was hit by the Covid pandemic in 2021 – [ ... ]
snooker
Ronnie O’Sullivan – What Changing Of The Guard?
If there is indeed a changing of the guard taking place in snooker, then someone clearly forgot to tell [ ... ]