A furious Stephen Maguire branded the table “a ski slope” after losing his Scottish Open quarter-final to practice partner Anthony McGill on Friday.

The 30-year-old McGill survived a fightback from his Glasgow friend to reach the semi-finals in the tournament’s bizarre temporary home of Llandudno in north Wales with a 5-3 win.

But despite a best-ever run in his ‘home’ event, world No15 McGill, now certain of semi-final action on Saturday, was almost as angry as his mate Maguire about the playing conditions.

Six-time ranking event winner Maguire, who also risks disciplinary action for turning the air blue in his post-match press conference, said: “It was just absolute sh*te from start to finish, even if that costs me £250.

“Ants was just as bad, I don’t think he’ll mind me saying. I didn’t enjoy it from start to finish. His century at the beginning was the only good frame, he started off well.

“I hope Anthony is honest about it as well, I am sure he will be, having won the match. The game is hard enough when the table is level, but when you’re playing on a ski slope it’s impossible. Maybe Ronnie O’Sullivan could do it, but we’re not as good as him.

“It didn’t help out there, the game is so tough. It was impossible especially if you are not playing well, and I lost my rag after the first few frames, I lost trust in the table.

“But listen, I was poor anyway. Snookering myself after potting what looked like frame ball – that’s just the sort of thing you will see if you come and watch me play. But even with all that someone half decent would have cleared up and forced a decider.

“I hope Anthony goes on and wins it, normally I’d always say him or John as the Scots boys but John has won enough.” 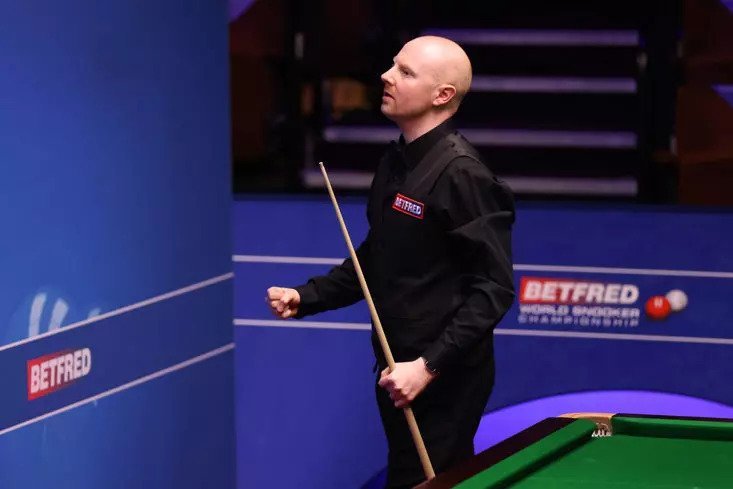 EVEN IN VICTORY, McGILL WAS CRITICAL OF THE TABLE

McGill said: “It was tough, the tables are so bad and make us both look like fools sometimes. It is not gripping, it is drifting, it is pinging and it leaves you not knowing what to do.

“I don’t think the tables were that great at the UK Championship, but they have been really poor here. It isn’t one thing wrong – but so many things, and it makes it so difficult.

“You can hardly take it seriously as a match. So I will try to win it, but I won’t get my knickers in a twist if I don’t.

“It’s like playing darts with a gale blowing across the oche. You would get someone like Phil Taylor throwing perfectly for the treble 20 and it hits the seven or something. There was one that went in-off that I didn’t think would be anywhere near the green pocket.

“Me and Stephen are the two unluckiest players in the world, anyway – that’s what we say to each other in the club all the time! But I don’t find it too difficult to play your best mates, we have done it enough over the years.”

McGill rattled in a break of 113 to get on the board – and in frame two some of the bad luck that was to dog Maguire in the next three frames began to kick in.

After McGill had gone in-off on frame-ball red Maguire then did exactly the same off the final red when looking to clear up to fall 2-0 down.

Frame three was another tough one for Maguire to swallow. After potting what looked like a frame-ball blue he snookered himself on the final red.

And with the frustration at boiling point Maguire served up two fouls including one on the black, as McGill stole the frame to make it 3-0.

Maguire then hit the black by mistake before blowing a good chance to hit back and it soon became 4-0 at the interval with seemingly no way back.

But things went from the ridiculous to the sublime for Maguire after the break as his form improved, the luck turned and McGill started to look nervy.

A superb break of 81 could have been a 147 but for one bad shot on the 11th black,  and spectacular flukes on the final yellow and green balls helped close the gap to 4-2.

Maguire then kept his rival off the scoreboard in frame seven to raise the prospect of an unlikely comeback win but he missed a great chance to force a decider and McGill held his nerve to close it out.

A WST spokesperson said: “We take feedback from all players into account when assessing table conditions. Alongside our partners, we strive to provide the perfect playing environment. We are always subject to changes in atmospheric conditions in different locations. The table will be recovered before the semi-finals and our fitters will perform a review once this has been completed.”