Mark Selby and Shaun Murphy will contest Sunday and Monday’s Betfred World Championship final – but both came under fire after their semi-finals wins at the Crucible on Saturday night.

Three-time winner Selby prevailed 17-15 against Stuart Bingham in Sheffield in a match that saw its final session hauled off for overrunning in the afternoon, and played to a finish after Murphy’s win.

During the clash Selby, 37, was warned for slow play by referee Ben Williams, and there were a large number of turgid frame and exchanges and multiple frames re-racked.

Bingham said: “It was gruelling to play in. I want to play a free-flowing game, but you have to question how slow the play was sometimes. I don’t know if he does it in purpose.

“Maybe it was close to gamesmanship, one time he took three minutes and then just rolled the white into the balls.”

Selby said: “It was only one or two shots that were slow, there was one I had brain freeze for one on Friday, but we had about the same average shot time so he can’t call me out for that.

“Overall Stuart played better and I was digging in for a lot of it. I did start to believe last year that I could win this title again, because two years ago I didn’t.”

Murphy staged a magnificent comeback victory over Kyren Wilson – but his opponent was unhappy with some fired-up gestures in the arena.

The 2005 champion made it to the showpiece for the first time since 2015 with a 17-12 win that featured a devastating streak from 10-4 down on Thursday and deep in trouble.

Murphy took 13 of the last 15 frames but clenched fists and punching the air left Wilson underwhelmed.

It is the first time anyone has recovered from a six-frame deficit in a Crucible semi-final since Ken Doherty won 17-16 after trailing 15-9 to the late Paul Hunter in 2003.

World No6 Wilson, 29, said: “The fist pumps he was doing look a bit silly I think, it’s not for me, but Shaun has to do what he wants to do to get to me – not that it did.

“I am raging, I came here to win it. I am knocking on the door here at the Crucible, it’s another semi-final, and just want to win that title. But Shaun is a great champion and will take some stopping.” 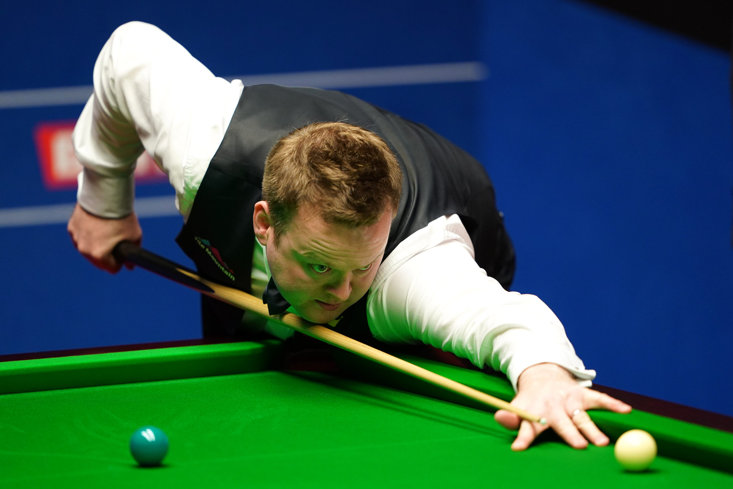 Murphy, 38, arrived at the Crucible off the back of a poor season, but also having shed a stone and a half in a charity weight loss competition with one of the snooker MCs.

Murphy, who will now play for the £500,000 first prize, said: “It means so much to all of us to get to a final here, and hopefully lifting the trophy.

“I’d be struggling to find a time when I have played better than that from so far behind, my record here is terrible in recent years.

“This is the biggest of all the events. I may have done some fist-pumps but I meant no disrespect to Kyren, and personally have no problem with that, we need that in sport. I celebrated my shots.”

Murphy trailed 6-2 after the first session on Wednesday and his chances looked almost non-existent on Thursday when he fell 10-4 adrift to such a proven recent Crucible performer.

But the comeback started by taking the final two frames of the day, and then resuming at 10-6 down yesterday morning the Magician cut loose, levelling at 12-12 ahead of the decisive evening frames.

Murphy now has a chance to go one better than losing to Stuart Bingham six years ago in the final and recreate the spirit of 2005 when as a fresh-faced 22-year-old he became only the second qualifier ever to lift the trophy.

Meanwhile Culture Secretary Oliver Dowden has heaped praise on snooker’s Crucible pioneers for helping to pave the way back to normality.

The government minister has been in Sheffield for a tournament that has been designated one of the most important pilot test events in the research programme.

Crowds started at 33 per cent permitted capacity rising to a full 925 for Sunday’s final, and test data from fans before and after plus checks on ventilation and crowd behaviour are being carried out.

The snooker tournament was a perfect test subject as the Crucible data can be used to help get crowds back to indoor sport, theatre, comedy and music events.

Dowden said: “The event has been going really well so far, and I want to say thank you and pay tribute to all those that viewers won’t see, behind the scenes, making this work.

“It’s great that fans can come in and watch snooker, but this is paving the way for sport and theatre and all those things we love that we haven’t been able to do during the Covid crisis.

“We have been gathering the data from this and the number of fans is going up, to 100 per cent for the final here, seeing the spread risks, and making sure we can get sport back safely again.

“The great thing about using the Crucible was doing two things at once – a sporting venue, but also a theatre venue at other times.

“The information gathered helps us to understand how we can safely re-open theatres, and also indoor sporting events.

“That will be crucial because hopefully we can have fans back socially distanced from May 17, and we want everyone back in from the middle of June."