It was in the home coaching box of the Stade de France that Shaun Edwards found himself on Sunday afternoon as France stunned England with a 24-17 win to open the 2020 Six Nations. The discussion about which box in which country, and even in which sport, had engulfed the Wigan-born coach throughout 2019.

Edwards had joined Wasps in 2001 as an assistant coach and began working under future Welsh coach Warren Gatland the following year. When Gatland headed home to New Zealand for a spell with Waikato, Edwards ascended to the Wasps’ throne. Between 2005 and 2008 Edwards won three titles to become one of the most sought-after English coaches, and he was offered a job coaching England’s second-tier national side, the Saxons. The alternative was to head across the Severn and begin working with Gatland once again as Welsh defence coach. He decided on the latter.

The newly-formed coaching team won the Grand Slam in their first full year together in 2008, and despite offers from England, who were keen to atone for failing to keep him in his home country, Edwards would stay with Wales for 11 years – even leaving Wasps in 2011 to give Wales his full attention.

The Gatland-Edwards partnership had to break up at some point, and 2019 was that year. The former wanted to return to New Zealand, a place he had only spent extended holidays in during his time coaching Wales. With that, the battle for Edwards’ contract began.

He appeared to be joining his hometown club Wigan Warriors as far back as August 2018. He had never coached in rugby league but had spent all of his playing career in the sport. The cracks appeared in early 2019 when Edwards revealed that he hadn’t signed a contract with the Warriors, and in April he officially turned the Warriors down and announced his intentions to stay in rugby union.

Wales wanted Edwards to stay on as part of new boss Wayne Pivac’s coaching team but their offer of a two-year contract couldn’t match France’s bid of a four-year deal for roughly the same money. After years of religiously sourcing their coaches from within France they had acquired one of the best defensive minds from across La Manche. 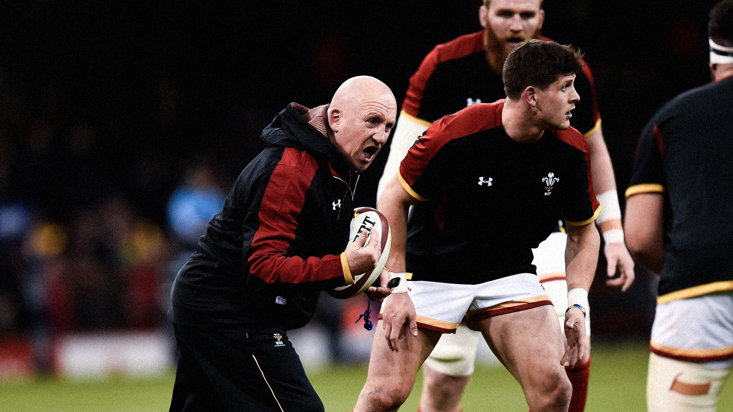 Shaun Edwards putting the Welsh team through their paces

Just one game after his arrival Shaun Edwards’ fingerprints can be seen all over this French defence, with key elements of recent Welsh sides already evident. The defence is about intensity; cut down the opposition’s space, swarm them once you start driving them back, and leave them with the kick as the only option. For almost an hour on Sunday, France did just that.

Edwards’ France charged off their defensive line with extreme line speed and bundled up the English carriers. The England starting back row, the group you would expect to carry most effectively, made just 37 metres in their 32 carries. That is a fairly pitiful return for the trio Eddie Jones would have expected to create holes for his backs.

The reason for that lack of success was the French intensity. It is impossible to carry successfully when you are hit well behind the gain line by two men intent on hammering you into the ground. France didn’t just do that once, they made 182 tackles on Sunday, many of those occurring during the numerous goal-line stands where England battered away time after time only to find the French door would not budge.

If defending is about heart then this version of France has much more than the team who conceded three tries per game last year. No doubt the fear of messing up and being called out by Edwards has helped there.

Anyone who has ever been coached by Edwards will know that the French team will not receive a rest week. As good as they were for an hour, the 53-year-old coach will be very concerned by the final 20 minutes.

France conceded 17 points in that final quarter, which suggests either a drop in commitment when it appeared like the game was won, or, more worrying, a drop in fitness. Defending like Edwards wants requires an extreme level of fitness, and there is a chance that this Six Nations will be too soon for France to show off the full benefit that Edwards brings.

What is clear is that Edwards, after dispatching the country of his birth, will have one eye on his former employers for what might be the deciding match of the tournament on February 22nd.

x
Suggested Searches:
Tyson Fury
Manchester United
Marcus Rashford
Lewis Hamilton
F1
Air Jordan
More
rugby
Eddie Jones' 2021 Failures Could Set England Up For World Cup...
After a review by the RFU into England’s woeful Six Nations performance, Eddie Jones has kept [ ... ]
rugby
Wales Win Six Nations Championship After Scotland's Late, Late...
Wales have regained the Six Nations Championship they last won in 2019 after France went down to a dramatic [ ... ]
rugby
Can History Repeat Itself? When Wales And France Shared The...
Wales are still favourites to win the Six Nations championship despite missing out on the Grand Slam [ ... ]
rugby
What Do Wales Need Scotland To Do Against France To Win The...
This is an unprecedented Six Nations campaign. For the first time we have an extra game being played [ ... ]
rugby
Six Nations: Last-Gasp France Try Cruelly Denies Wales Grand...
It promised to be a ‘Super Saturday’ unlike any other and it’s safe to say it delivered [ ... ]
rugby
England's Final Six Nations Game Against Ireland Is More Than...
You’d be forgiven for thinking England’s final Six Nations game against Ireland was a dead [ ... ]
rugby
Late Maro Itoje Try Gives England A Much-Needed Win Over France
England got back to winning ways in the Six Nations Championship by the finest of margins on Saturday [ ... ]
rugby
The Stats Don't Lie, Ill-Discipline Has Cost England The Six...
We’ve all seen the headlines. Too many mistakes and too many penalties have cost England in a [ ... ]
rugby
Alun Wyn Jones' Has Shown In The Six Nations Why He's A Lions...
146 caps, fifteen years of service and one cheeky smile, Alun Wyn Jones has been the beating heart of [ ... ]
rugby
Poor Officiating Puts Dampener On Wales Win Over England That...
Wales have kept their hopes of a Grand Slam alive, secured a bonus point and won the Triple Crown, with [ ... ]
rugby
England Need To Be Cool, Calm And Composed Against Wales In...
Eddie Jones is imploring his England side to be on the alert for any scheming from Wales captain Alun [ ... ]
rugby
France v Scotland Six Nations Game Called Off After Latest Positive...
France’s upcoming Six Nations match against Scotland, due to take place this Sunday, has been [ ... ]
rugby
Jack Nowell Aiming For England Recall When He Returns From Injury
England and Exeter winger Jack Nowell looks set to return to action in March after being sidelined for [ ... ]
rugby
Can Eddie Jones Really Blame A Lack Of Fans For England's Six...
England’s start to the Six Nations has been underwhelming to say the least. An opening day defeat [ ... ]
rugby
It Wasn’t Pretty But England Get Back On Track In The Six Nations...
It wasn’t pretty and wasn’t as easy as past England triumphs over Italy but Eddie Jones’ [ ... ]
rugby
How The Six Nations Has Become A Pivotal Moment In Eddie Jones'...
England’s shock defeat to Scotland last weekend certainly threw up more questions than answers [ ... ]
rugby
Six Nations Blown Wide Open With Scotland's First Win At Twickenham...
This year is different. How many times have we heard that over the last twelve months? The global pandemic [ ... ]
rugby
Eddie Jones' Mind Games Can Only Help To Fuel Scotland's Fire...
Eddie Jones has been at the mind games, but it feels like he needn’t really bother. Scotland arrive [ ... ]
rugby
Betfred Super League To Return Without Scrums Due To Covid-19...
The Betfred Super League season will begin without scrums following confirmation from the RFL board [ ... ]
rugby
Three Reasons Why England Winning The Six Nations Isn't A Foregone...
England go into the 2021 Six Nations in imperious form. The defending champions have finished outside [ ... ]
rugby
England’s Beno Obana And Maro Itoje Tackle Race In Rugby In...
Rugby Union has a race issue. It’s uncomfortable to talk about or even acknowledge but it’s [ ... ]
rugby
Hard Men Of Rugby, The Book That Revels In The Legendary Tough...
The famous maxim goes that 'football is a game for gentlemen played by hooligans, and rugby union [ ... ]
rugby
‘Rob Burrow: My Year With MND’ Is Emotional, Educational And...
“I’ve too many reasons to live. I’m not giving in ‘til my last breath.” [ ... ]
rugby
The Rugby Playing Ninja DJ, Welcome To The Many Lives Of James...
Sport, and rugby in particular, needs James Haskell. Brash, outspoken and at times just plain crackers, [ ... ]
rugby
Book Review - Pride And Passion By Warren Gatland
Halfway through this meaty autobiography, Warren Gatland, a confident and successful individual, comes [ ... ]
rugby
Book Review: Rory Best - My Autobiography
The last few years have been among the sunniest in the Ireland rugby team’s history. Yet [ ... ]
rugby
Eyewatering! 857 Million People Across The Globe Tuned In To...
Approximately 200 years ago, the world’s population was estimated at around 800 million people.  [ ... ]
rugby
Eddie Jones Admits ''I Don't Enjoy Coaching'' As Talks Linger...
Eddie Jones was not giving anything away when asked about his England future but did admit he doesn’t [ ... ]
rugby
New Look Wales Are Vulnerable To England's Intelligent Six Nations...
It’s no secret that, on their day, England have a power game to match most teams in world rugby. [ ... ]
rugby
Eddie Jones Is Determined To Squeeze Every Last Drop Out Of...
Eddie Jones’ team selection for England v Ireland got a lot of headlines, with five locks and [ ... ]