Neil Robertson has accused young players in snooker’s traditional power base of the United Kingdom of lacking the raw hunger to compete with the wave of talent flooding through from China.

The Australian, based for many years near Cambridge, received another reminder of the deep reservoir of Chinese potential champions after losing 5-4 to 22-year-old Pang Junxu in the last 32 of the European Masters in Milton Keynes on Thursday.

And it was no fluke, as the in-form world No4 - the man of the season to date, with three titles already under his belt and more big even to come – watched Pang roar back from 4-2 behind with breaks of 73, 101 and 90 to seal victory.

The ‘second wave’ from China after Ding Junhui’s emergence is looking ever stronger, with Yan Bingtao having won last season’s Masters, and Zhao Xintong this season’s UK Championship – and the likes of Zhou Yuelong, Yuan Sijun and others lined up behind them.

But by comparison the cupboard is looking a lot barer in the UK of players with the same potential and big wins already under their belts at the same age. And this from the nation that has produced most of the legends including Ronnie O’Sullivan, Steve Davis, Stephen Hendry, John Higgins and Mark Williams.

Robertson, 40, said: “It looks like China have got another really good young one to join Yan Bingtao and Zhao Xintong on the conveyor belt of talent from that country. Wu Yize, who is only 18, also impressed Ronnie O’Sullivan this week, and he got through a couple of rounds at the UK, so that’s another one to impress – and there are more besides.

“It’s good to see, and good that everything that World Snooker did in China to make the most of Ding Junhui’s success is bearing fruit. At one time you were concerned that all the investment into China wasn’t producing champions, but it clearly is looking at the last 18 months.

“And by comparison there aren’t the same number coming through in the traditional power base in the UK – and I think the main reason for that is that there are fewer and fewer places to play that support junior snooker players. There are restrictions at some clubs on hours.

“I don’t know also if the youngsters here are more distracted by things like social media than the Chinese lads, although they certainly have that as well. But I have seen that for many of the Chinese players, they see professional snooker as a way of improving their lives, and in some cases getting out of poverty.

“In the UK I don’t see the kids wanting it enough, and they know their lives will be okay no matter what. I don’t see that absolute hunger in young players in the UK and I hope that changes because this country has produced unbelievable players, the best that have ever played it.

“I hope to see that change and we can see more young and very hungry players emerge. Clearly a lot of them here do work hard – but do they work hard enough? And the answer is definitely no. 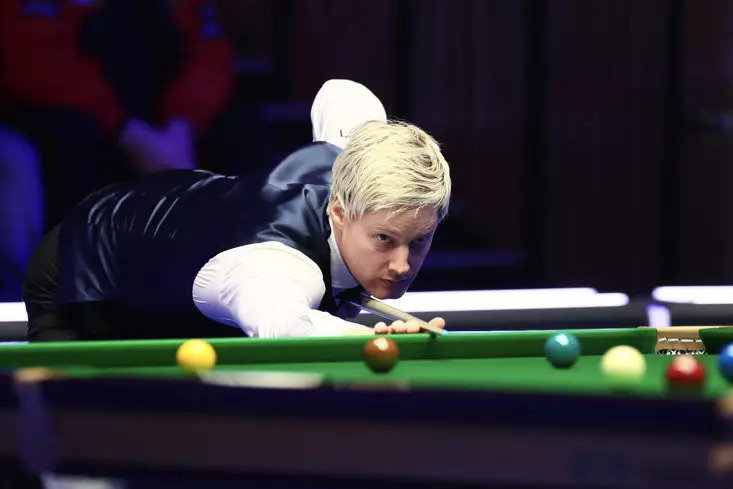 “Pang did really well in the win against me – and it was good match, real attacking stuff. I was maybe a little too aggressive going for a brown going into the pack in the decider, but that’s the way I play and you’d much rather lose at least having gone for your shots.

“I could have played a bit better but he played a fantastic match – beautiful positional play and a good long potter, striking the ball really well. He’s got everything you hope to see in young players coming through. He looks the real deal.

“I played him once before in this same event last season and beat him, but said to a couple of players ‘This is another one from China that if he keeps improving could get good results’. A couple laughed at me and weren’t so sure, but he has proved them wrong as he stands up to big names.”

With what he has already won during the current campaign, Robertson could afford to be fairly phlegmatic about a rare defeat – and there were compensations, including the chances to go and watch his beloved Chelsea in the Carabao Cup final, and son Alexander in football action.

He added: “Defeat to Pang at the European Masters is one I can take on the chin, especially the way he finished off the match. In any tournament, to win it, there is at least one match you need to get away with it and I didn’t in this one. And I made him win it.

“What it does mean is that I can go to the Carabao Cup final this weekend, and also go and watch my son Alexander who is playing this weekend. It’s not really me to lose with a smile on my face…but when you have good things to look forward to away from the table and you have already won a couple of titles, you are playing with less pressure.

“I think Ronnie plays with that mindset at the moment, and maybe that’s the key to longevity – keep it as stress-free as possible because eventually you could start to do yourself some damage if winning is everything and your become miserable away from the table.

“So I look forward to playing in the Welsh Open where I am playing Jimmy White, which is always a good occasion.”