It is one all those following and involved in snooker were waiting for – the autobiography of sporting and business force of nature in Barry Hearn OBE, someone with a deep passion for the sport and also something even stronger in the shape of a sense of gratitude – knowing the game was at the root of the current Matchroom global empire now worth hundreds of millions.

It is a must-read sporting compendium of a book, but given the ongoing Betfred World Snooker Championship, and with the game being Hearn’s first and enduring sporting love, and my own 20-year association with both the sport and via that medium the author, I’ll focus on that – though don’t imagine for a second that boxing, darts, football, fishing and so much else aren’t fully covered.

As a newly qualified accountant and finance director at diversifying fashion design consultants Deryck Healey, Hearn was offered and bought in 1974 the Luciana Temperance Billiard Hall chain of clubs in east London and Essex, admitting: “The timing could not have been better…and that was down to luck, not foresight.”

“From the moment I walked into my first billiard hall, I felt at home – I looked around the customers, and saw myself.” But those customers included a sprinkling of villains, with stolen goods being sold in corners, and on one occasion neither Hearn or the manager of the Lewisham club daring to remove a shotgun from under a table during a game.

If there was another bit of fortune shortly afterwards it was a lanky and gangly ginger-haired kid called Steve Davis walking through the door in Romford where Hearn had his office. And as he began to take the Plumstead youngster around the country backing him whenever he played, Hearn reveals: “It dawned on me that in Steve I had the ace in the hole… he had an eerie self-assurance”.

The years building to Davis’s first world title in 1981 are arguably the best part of the book, with the dreams and passion flowing through the pages. In Hearn’s words, “We saw ourselves as a team, two council-house kids going out to conquer the world”. And when the day did finally come, the supreme importance the promoter still attaches to it is evident. 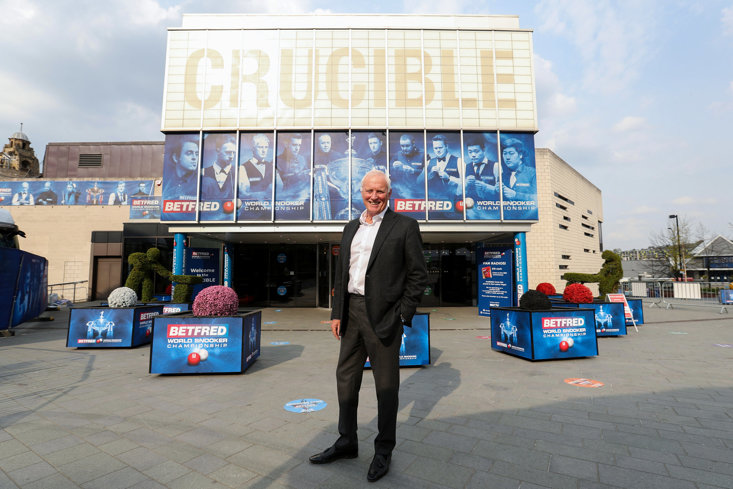 In the opening to the book on the climax against Doug Mountjoy at the Crucible, Hearn says: “I kept telling myself over and over again – don’t do anything stupid. But within seconds of him potting the winning pink, I was on the floor, racing across to give Steve a hug that was more like a rugby tackle”.

With the BBC and other channels showing so much snooker, Hearn was in pole position to expand his roster of players and exploit the booming popularity of the game. With Terry Griffiths, Tony Meo, Dennis Taylor and Willie Thorne also on board, the ‘Snooker Loopy’ song, a collaboration with musicians Chas and Dave, was inflicted on an unsuspecting nation. Hearn admitted: “It was my idea. It was no threat to Leonard Cohen… but it got to No6 in the charts, and us on Top of the Pops.”

In recent years after Hearn came back to take control of snooker in 2010 and in the view of many rescue it from a moribund state and years of neglect, he clashed regularly in public with the game’s No1 box office star Ronnie O’Sullivan. While Hearn admits the relationship soured, he insists the Rocket is the greatest player of all time.

And while the then 16-year-old’s manager, he recalls fighting for the player’s right to turn professional. He says: “I put the case in a meeting but I could tell it wasn’t going well. I was not in the least popular with the WPBSA. So I said ‘this is not about him..it’s about you not liking me’. I undid my belt, let my trousers drop, and stuck my arse towards the board. They let Ronnie in.”

With snooker in trouble in the late Noughties, Hearn was persuaded to have a shot at reviving the sport and after winning a very tight player vote in the summer of 2010, he took the reins. O’Sullivan has remained the biggest star in that time, and Hearn makes clear: “Like all geniuses, Ronnie is not a normal person. If he was, I don’t think his snooker would be so sublime, nor would his career have lasted so long. He can be a pain – but that seems to go with out-of-this-world talent.”

For those who have worked with Hearn or for him, one character trait never far from the surface is a prodigious work ethic. This comes through in several of his ’Ten Commandments’, and also ‘Rules Of Life’ which offer real insight into the motivations to keep pushing onwards.

Hearn admitted at this year’s World Championship that two stories from his colourful and incident-packed life and times were taken out by the lawyers – but that still leaves many hundreds left for sports and snooker fans to enjoy, and keep them thoroughly entertained.

Barry Hearn; My Life – Knockouts, Snookers, Bullseyes, Tight Lines and Sweet Deals [written with Nick Pitt] is published by Hodder and Stoughton, and available at bookshops and online at £20.