Snooker
News
The showpiece against Judd Trump was overshadowed in the first session by two heated clashes between the world No1 and referee Olivier Marteel
Hector Nunns
21:25, 01 May 2022

Ronnie O’Sullivan was involved in a battle with referee Olivier Marteel on Sunday as the dream Crucible final turned ugly.

A fired-up Rocket is bidding to equal Stephen Hendry’s greatest record by winning the Betfred World Championship for a seventh time.

But the hugely anticipated showpiece against 2019 winner Judd Trump was overshadowed in the first session by two heated clashes between the world No1 and the Belgian official.

And that resulted in the furious 46-year-old legend accusing Marteel of “looking for trouble”.

The biggest flashpoint came in a tense eighth and final frame of the opening afternoon session - creating a poisonous atmosphere in the arena.

O’Sullivan, standing 5-2 ahead, snookered himself behind the blue on the final yellow looking to clear up – and then fouled the black attempting an escape.

But after angrily storming back to his chair the referee paused the game asking Trump to wait – and gave the Rocket an official warning, claiming he made a lewd gesture.

O’Sullivan furiously denied the charge with no clear TV evidence either way – and demanded “Tell me what you saw?”. He then raged: “You saw nothing, don’t start – go and look at the camera”, pointing Marteel to the marker’s video. 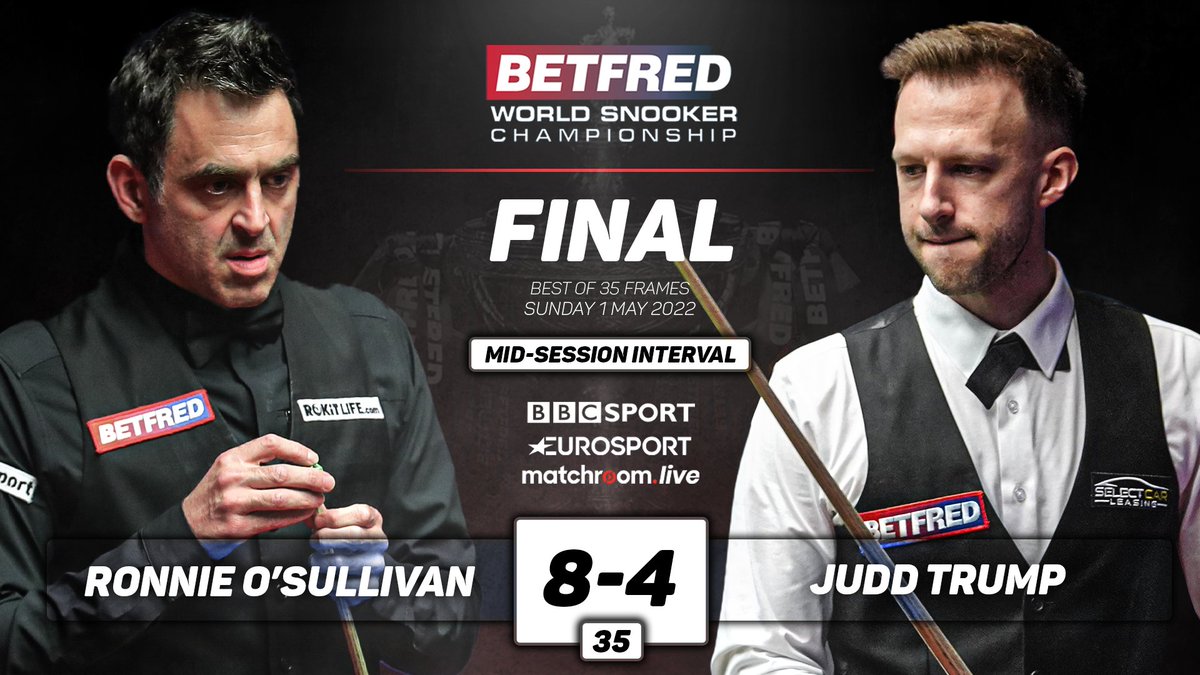 Trump had been kept waiting to play his shot all this time at a key stage of the session.

And the unhappy world No4 then joined in, querying the way in which the official had dealt with the issue.

After Marteel told Trump “I had to say something”, the Juddernaut replied: “Couldn’t you have done it after the game?”

O’Sullivan, still protesting his innocence, said on re-entering his dressing-room: "He's looking for trouble, you get a vibe from the guy.

“They have hundreds of cameras out there and he can go and check them all. I'm not going to have any of it because he is just trying to create something."

A statement issued by World Snooker Tour after the second incident read: “Ronnie O’Sullivan received a formal warning from the referee following a gesture he made in the eighth frame. There will be no further comment on this matter.”

That effectively meant he was walking a tightrope, with a further warning meaning a frame being docked, and another seeing the final forfeited.

Though O’Sullivan fiercely denied this latest charge of making a gesture, he has been referred to the disciplinary panel over a separate incident earlier in the event.

Incredibly that was O’Sullivan’s SECOND clash with the official with the titanic showdown still in its early hours.

Earlier O’Sullivan, who made his 200th World Championship century in frame two, demanded of Marteel:“ You play the shot” following a row about where the white was replaced.

O’Sullivan could only just see the tiniest edge of a red behind the blue – and asked both Marteel and Trump to check that before his first attempt.

When he failed to make contact a miss was called meaning the white was replaced – but not to O’Sullivan’s satisfaction.

And the resulting argument led to a delay of SIX minutes as roars of laughter rang out from the sell-out 980 crowd.

At one point in the drawn-out process an exasperated Marteel said: “You can see the red on the left-hand side.”

But that only drew the response from O’Sullivan who insisted he couldn’t: “You try, then – do you want me to play another shot? I can’t see it.”

Peacemaker Trump helped resolve the situation, agreeing to move the white slightly, and O’Sullivan then managed to hit the offending red.

The fireworks were not even over in that frame – as Trump blew a chance to level at 2-2 and then saw his rival pot a re-spotted black with a ‘cocked-hat double’ off two cushions to lead 3-1.

O’Sullivan, who refused the traditional shake of the referee’s hand at the end of the first session, had also complained about a security guard at the back of the arena – insisting that he was moving.

But with renowned sports psychiatrist Steve Peters – who helped save O’Sullivan’s career in 2011 when he was on the verge of quitting – in his corner and dressing room for the evening session, things took a calmer turn in the Sunday evening session, the second of the final.

Without acknowledging he had made any gesture O’Sullivan did apologise to Marteel for how he had handled the whole situation – and there was a fist-bump at the start of the second session.

When O’Sullivan made his third century of the final, a run of 118 to take his lead to 8-4 with five frames left in the evening, it took his event tally to 15 – one off the record of Stephen Hendry and Mark Williams.