Ronnie O’Sullivan saw hopes of an eighth UK Championship title dashed after a series of sit-down protests over crowd noise.The Rocket was agitated from the start of his quarter-final against Kyren Wilson at the York Barbican – and was edged out 6-5 in a thriller by the world No5.

Snooker legend O’Sullivan has missed out on the chance of celebrating his 46th birthday in Sunday's final after Wilson gained revenge for a 2020 world final defeat.But on multiple occasions an irritated O’Sullivan sat down in his chair mid-break due to crowd interruptions - as boozed-up fans watching the other table came and went.

The bars were heaving at the venue as a large pre-Christmas crowd turned up the volume in and out of the auditorium. And in a further long exchange with referee Jan Verhaas, O’Sullivan called for a photographer who was observing all the protocols to be thrown out of the arena.

O’Sullivan said: “With the crowd - I could see them out of the corner of my eye, and like I said to the referee that I had all day. I can deal with loads of movement or no movement – but not both.

“But I said to the referee I’m in no hurry and have no other plans, I have set aside today to play snooker so I am happy to wait. So no real issue.And it should be a standard for a photographer to have a tripod, which is why I asked him to be removed.

“I missed too many balls today and wasn’t clinical or good enough – you can’t do that at the highest level. I did well to get five frames.Kyren is hungry and wants titles and to do what I have done in the game. I was like that when I was younger, and it’s good to see he has a real passion for the game."

Wilson, who showed great character to shrug off both an O’Sullivan onslaught and the interruptions, had little sympathy. Ahead of a semi-final against Belgium’s Luca Brecel, he said: “The crowds didn’t distract me, I just wanted to get on with it.

“I practice in a busy club in Northampton and there are always people walking around! So on my turn I just got on with it, and after a Covid spell with no fans it’s great to see them.

“Ronnie is a flow player and all about momentum and it won’t be ideal for him stopping and starting. But we know there are two tables out there, and that crowds will move.

“It is one of the biggest wins in my career. Sometimes the snooker gods don’t forgive you and I thought I’d maybe missed the boat not closing it out 6-3. But I always back myself under pressure.

“I have let a couple slip against Ronnie in the past, so it’s nice to get that one. We all know what it’s like against him, you are playing the crowd as well.The only thing that is missing from my CV are the big titles, and that is what I am here to try and put right.” 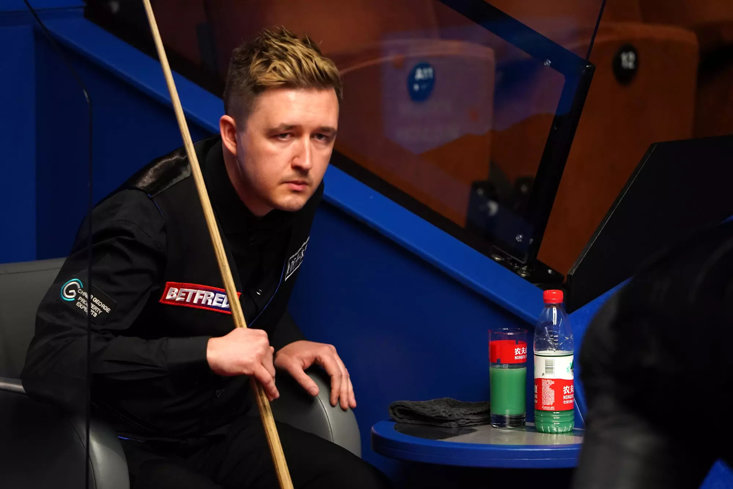 Wilson sprang out of the traps with breaks of 92 and 117 to lead 2-0 before O’Sullivan got on the board. But the trouble started in frame four with dozens of spectators loudly leaving and entering the arena after a long frame between Luca Brecel and Anthony McGill on the second table.

O’Sullivan complained to Verhaas and sat down mid-break on a run of 24 until the noise and disruption came a halt. He had reacted in the same way after similar problems earlier in the event. However after resuming he shrugged off the issue and levelled the match with a superb break of 115.

Wilson then stole the next frame with a break of 66, before the Rocket dished out some of the same medicine in the next with a 76 to tie it up at 3-3.There then followed another animated and agitated exchange between the seven-time UK champion and the official as O’Sullivan complained about a photographer.

This resulted in the snapper being thrown out for not having a tripod for his camera, even though the monopod being used was totally within the regulations.A break of 71 saw Wilson, doing his best to ignore the antics, edge ahead once more before O’Sullivan staged TWO more sit-down protests in frame eight.

First he went back to his seat after potting brilliant long opening red with fans noisily coming back in after the interval on table two. And after potting a brown he sat down again, telling the Dutch official, “It’s the noise, I’d rather they all sit down - I’ve got time, I’m not in a rush”. However Wilson held firm to move 5-3 up.

It happened again at an even more key stage of the contest with O’Sullivan 5-4 down – and when Wilson wilted by missing a red it was 5-5 in the blink of an eye.

Brecel saw off an out-of-sorts Anthony McGill 6-2 to reach a Triple Crown semi-final for the first time.The 26-year-old said: “I may have to play better and kill frames off quicker against Kyren. I thought Kyren had a good chance against Ronnie, and this will be big for both of us.”