It is an intriguing thought. If Scotland can put 44 points on Georgia in Tbilisi, what might they be capable of doing to them at Murrayfield on Friday night? And more to the point, what damage could Gregor Townsend's men do at the forthcoming World Cup in Japan?

Scotland destroyed the Georgians 44-10 last Saturday and now face them again in their final warm-up game ahead of their World Cup opener against Ireland on September 22. In front of an expectant home crowd in Edinburgh, Scotland will be expected to rack up another big score before boarding the plane to Japan.

On Tuesday, Townsend announced his 31-man World Cup squad with Stuart McInally named captain but centres Huw Jones and Rory Hutchinson, who scored twice in Georgia on his first Test start, are the major omissions.

Forwards Josh Strauss, Matt Fagerson and Magnus Bradbury also missed out but Edinburgh hooker McInally was chosen ahead of John Barclay and Greig Laidlaw to wear the armband.

"I was injured for the last World Cup, so this makes it sweeter," he said. "It was a very proud moment when I was asked to be captain."

Adam Hastings has been included cover for star fly-half Finn Russell and Townsend admitted: "It's been a tough process getting down to 31 players, but we are very happy with the squad we've selected.

When we play to our best we are a match for any team in the world. We have a stronger squad now than we've ever had. 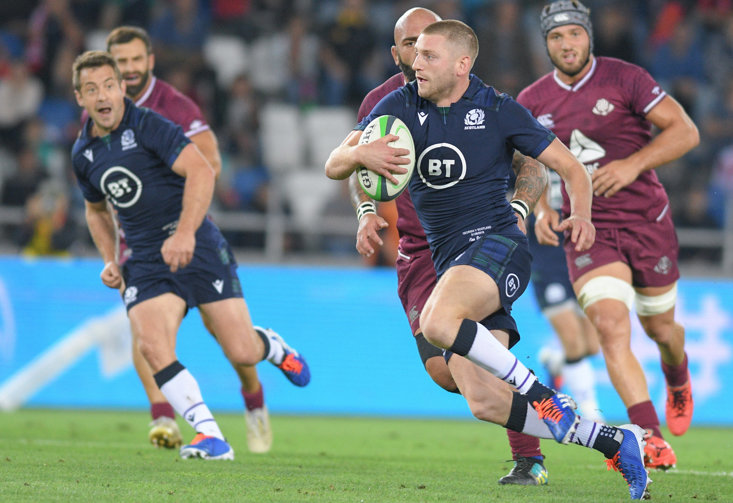 For Friday's showdown with Georgia, Townsend has opted not to start any players who missed out on his World Cup squad.

Wilson will be captain for the first time, while Jonny Gray, Tommy Seymour and Blade Thomson return. Blair Kinghorn, Darcy Graham and Sam Johnston are the only starters retained from Saturday's win in Tbilisi.

Of those who missed out on World Cup selection, hooker Grant Stewart and flanker Magnus Bradbury are on the bench. Seymour and Thomson return after suffering concussions in the win over France at Murrayfield almost two weeks ago, and Gray features for the first time this season after a hamstring strain.

"It's a boost to have them back," Townsend said. "It's also great to involve two players who just missed out on selection to our group to travel to Japan.

"As with all those that didn't make the 31-man squad, it's important they keep training and playing well in case they get a call up during the tournament."

Scotland have won their last two Tests against France and Georgia after being thumped by the French in Nice in their opening World Cup warm-up match.

"It’s another opportunity for players to get valuable game time and build on what was a very good performance last weekend in Georgia," added Townsend.

"We are very aware that Georgia will be much improved after their first hit out of the season and they will know much more about how we play. "We expect a very tough challenge and it will require an improved performance from our men to deliver a winning outcome.

"Friday night gives us the opportunity to keep improving and get one step closer to playing our best rugby over the next few weeks."