Motorsport
News
The series allows drivers to take on some of the toughest terrains in the world
Jack Porter
11:34, 17 Dec 2019

The inaugural Extreme.E season has revealed its provisional calendar as the highly-anticipated electric off-road racing series gears up to make its bow on the world stage.

Though racing fans will be devoid of the event in 2020, 2021 will kick off with a blast right away, with the first race at the most recently announced location of Lac Rose near Dakar, Senegal taking place between January 22 and January 24.

This will be followed up by the ‘Desert’ section of the series, across March 4, 5 and 6 at Sharaan, Al-‘Ula, Saudi Arabia.

Then comes ‘Mountain’, at the Kali Gandaki Valley, Mustang District in Nepal almost exactly two months later, from May 6 to May 8.

There’s a longer period to wait across the summer of 2021, with a three-month period as Kangerlussuaq, Greenland - for ‘Glacier’ gets prepped for the end of August (27, 28, 29).

The competition concludes by Halloween, with Santarém, Pará, Brazil - there could really be no better location for the ‘Rainforest’ segment than the Amazon, as the competition aims to continue to awareness of global environmental issues.

“Finalising the first calendar is a great moment for any championship and today we have this moment,” said Extreme E Founder and CEO Alejandro Agag as the schedule was revealed, “I had no idea what this journey was going to be like when we embarked on it a few months ago.

“I’ve been to five of the most spectacular, remote locations on the planet; each facing issues at the hands of climate change and human activity. It has been a life-lesson.

“In six months, I’ve seen the impacts of climate change first-hand and have met people that are experiencing the effects. For anyone that denies its existence or is unaware of the problems it is causing – just come with us on this journey.

“We were in Greenland for our first announcement a few months ago where we could see the ice cap melting. In Senegal, 1000 kilometres away, the boarding school that helped us with our beach clean at last week’s announcement has tripled in size because the coast is disappearing through sea-level rise and people are being displaced. You can see that all of the challenges are interlinked.

“I am incredibly grateful for the support we’ve received from all of our hosts and I can’t wait for what is going to be a special, unprecedented odyssey which will drive real change to get underway for the very first time.

“To have sealed all five of our locations by this point, with Extreme E having been little more than an idea on a napkin back in January this year, is an achievement I am very proud of.

“The team has worked tirelessly behind the scenes up to this point and will continue to do so right up to January 2021.” 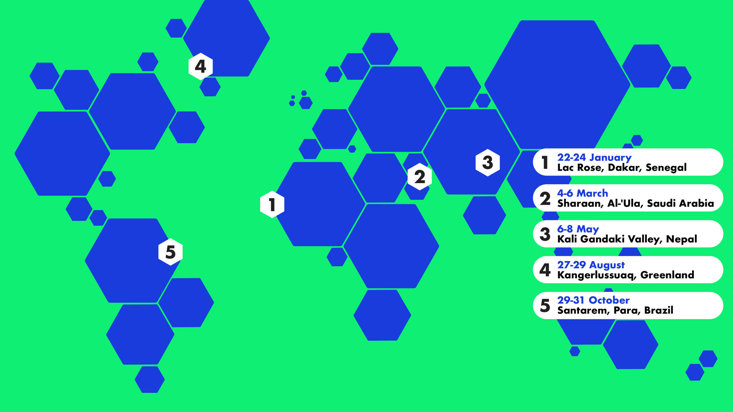 The series allows drivers to take on some of the toughest terrains, cavorting around in state-of-the-art electric SUVs, with the issue of climate change at the forefront of the tournament’s purpose. Furthermore, the series drastically reduces its carbon footprint by operating a ‘floating paddock’, the RMS St. Helena, used for transportation to some of the most extreme and remote places on the planet.

Extreme E. is electric, it’s voltaic, it’s eccentric! Plug yourself in for 2021.