Snooker
News
Northern Ireland's Mark Allen has the experience and pedigree to do well at the World Championships in Sheffield
Rob Walker
08:00, 04 Apr 2021

Mark Allen is one of the best break builders in the modern game and when the Antrim cueman is at the table amongst the balls, watch for the rosy glow.

That’s the inside tip his Dad once gave me when we shared a drink after yet another of his son’s memorable runs to a major final.

“When Mark’s cheeks go red, it’s a telltale sign he’s in the mood.”

Insight that could only be provided by a proud father. And it’s true, it is the surest signal that the 2018 Masters champion means business. Watch for it the next time he’s constructing another brilliant clearance.

Nerveless break building isn’t the only asset that has helped Allen cement his place among the sports elite for more than a decade. There’s a fearlessness in his approach to the sport and big matches.

Psychologically, the hardest player to come up against must surely be Ronnie O’Sullivan. It’s not just his mercurial ability and inventive shot choice, but also the fact that he almost always has the majority of the crowd on his side (touchwood there will be a crowd once more in Sheffield this year). As a result of both those factors, only a handful of current players can honestly lay claim to being unintimidated by his reputation. Mark Allen is one of them.

Which is why it is not a coincidence that “The Pistol” has beaten “The Rocket”  in major encounters in two of the sports big three events – twice at the Masters (including a 6-1 thrashing en route to the title in 2018) and at the World Championship in 2009, when he won 13-11 in the last 16 (en route to his only crucible semi-final).

When you get to know Mark his strength of character makes sense. There’s an honesty and a frankness to his opinions on himself and others that I find refreshing. Ten years ago things were tricky in his personal life and his place in the top 16 was on the line at the Crucible. He came through a nail-biting first round decider against Matthew Stevens (from 9-6 down) which preserved his status in the 16 and he kissed his daughter in the front row as he left the arena.

Then he marched straight into the press room and opened up about how he had been struggling with depression. One of the first snooker players to do so.

Last year when we all gathered in Milton Keynes for the Tour Champs during that sweltering first lockdown, he told me that he had sensed that he was beginning to struggle once again, this time triggered by living alone, so he had taken it upon himself to go round his local area running errands for the old people on his road.

Helping himself by helping others. Class. 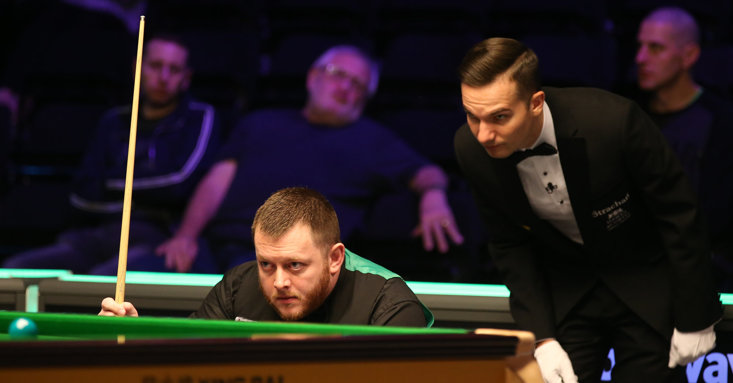 I think it takes a certain maturity to recognise what’s going on in your own head and ensure you take positive action to do something about it. That week in June, he embarked on an excellent run at the rescheduled Tour Championships, beating Shaun Murphy 9-8 and Mark Selby 9-2, before eventually losing to good friend Stephen Maguire 10-6 in the final, picking up a runners up medal and a handsome cheque for £60k. You reap what you sow indeed.

There’s also no lack of sense of humour in Northern Ireland’s number one either. Many years ago he got in a spot of bother with World Snooker after some typically blunt comments about going to China. There was a public exchange with the sport’s chairman Barry Hearn and a small fine was issued. The next event was the UK Champs in York and when he came into the press room for his obligatory post match press conference, he had sellotaped his own mouth shut to prevent getting himself into any more hot water. We all saw the funny side and so did he. He’s an individual and the sport needs him.

So what about this season then? Well there’s no doubting the highlight for the world number 13: his magnificent victory at the Champion of Champions in November last year. It may not be a ranking event, but it is arguably one of the most prestigious invitational titles on the circuit and the way he did it was simply sensational.

He beat the world number two Ronnie O’Sullivan 6-3 in the quarters, world number one Judd Trump 6-1 in the semis and then completed the hat trick, producing four centuries against world number three Neil Robertson, winning the title 10-6 in the final. Utterly immense. In terms of who he beat and how he beat them, I’d say it’s at least equal in achievement to that maiden triple crown title at the Masters in 2018.

Since that memorable victory, by his own typically blunt admission things have gone flat. He’s tried unsuccessfully tinkering with his cue, which he said just didn’t feel right (even in spite of the superb win in Milton Keynes), and in terms of ranking events, his best weeks of the season were reaching the last 16 of the European Masters and Scottish & Welsh Opens.

For a man who knows he can win these events, Allen knows that kind of return is not up to standard. So what about this year’s Betfred World Snooker Championship? Since that one semi-final in 2009, there have been three subsequent appearances in the quarters, although tellingly just one of those (2018) has come in the last nine years.

Allen has the talent, the temperament, experience and pedigree to go far in Sheffield, but for whatever reason it hasn’t really clicked for a long time in Yorkshire.

The difficulty is that the more time that passes since that semi final, the harder it is to get back there. He needs a good draw and the right kind of match to get him going this year. If he comes through a hard fought, high quality first round encounter, it might be enough to ignite the Celtic flame which has failed to spark since November.

If it does, watch for those cheeks and that glow.