Snooker
News
Selby is in a headspace that makes him a dangerous opponent for anyone at this year’s Betfred World Snooker Championship
Rob Walker
10:00, 13 Apr 2021

Mark Selby is back to his best. At first glance that might seem a strange statement to make about a snooker player who has won 13 titles over the last five years. In a literal sense he has never stopped winning.

Yet, if you speak to those closely involved in this great sport, they would agree that while the trophy tally has kept ticking over for the Jester from Leicester, for the last couple of years there’s been an almost imperceptible dip in Selby’s aura around the table.

After all this is the man who spent close to four years at the top of the world rankings, winning three world titles in four seasons, and for a while he was unbeatable. But, just as Judd Trump’s period of total dominance will, eventually, come to an end, so it did for this hugely likable 37-year-old.

Abroad, he kept picking up the big ones with the China Open and China Championship titles in 2018, but where we noticed it most was in the Triple Crown events. Having gone through a spell of reaching the business end of almost every single UK Championship, Masters and Worlds, we began to see some uncharacteristically early exits. For some reason it was back home where the winning streak seemed to be drying up a touch.

Snooker is a sport where the margins of success and failure are measured in millimetres rather than centimeters and it wasn’t as if his class had disappeared. I just think he lost a little of his mojo. It was never far away, but things just needed to click into gear again.

Then came the signs that he was back on the right road. Early last season (which feels like a lifetime ago now) he won the English and Scottish Open titles in the space of two months. Eight weeks of consistent form and a reminder, for himself as much as anyone else, that he could once again win regularly on home soil. They were his first two titles in Britain for over two years.

In all this I don’t think it’s a coincidence that he began working with well-respected coach and mentor Chris Henry. The multilingual, talented pianist is a fascinating man and always great value for a conversation over a beer at an event. There is something calming and reassuring about his manner around the players and that’s why so many have worked with him over the years.

Selby didn’t need someone to tell him how to pot balls again, he has never forgotten how to do that,  I think it’s been more a case of finding a way to enjoy it again and not dwell or agonise over every lost frame or poor shot. That presence in his corner has worked. He hasn’t started winning everything in sight again, but the Selby aura is definitely back, make no mistake.

With so much time on their own on tour and so much time in the chair to reflect on poor shots, I think the psychological pressure in snooker is underestimated by outsiders. Of course the players realise it’s a great way to make a living, now more than ever, but when things are going wrong it can be a lonely existence. 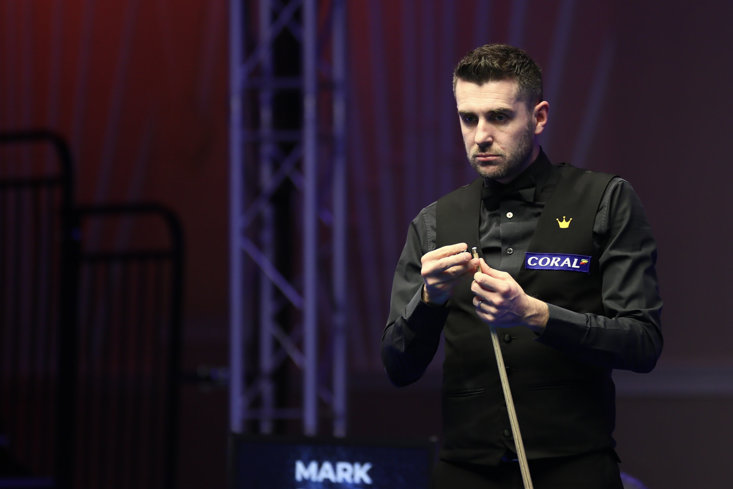 I’ve got to know Mark pretty well over the 14 years I’ve spent on tour. Personally and professionally I hold him the highest regard. He has the heart of a lion.

When the time comes for him to tell his story properly it will only serve to heighten the respect he already commands in the sporting world. There is much we have still yet to hear about from his early life and there are chapters he may never wish to disclose.

Yet in an incredibly candid interview at this year's Betfred Masters, he gave us a window into his mental strength and philosophy when he spoke of having contemplated suicide as a teenager in the aftermath of his dad dying. The lessons he learnt in that period have been seared into his subconscious and, for most of his career, it has given him an edge and a sense of perspective others just cannot match.

He never loses his cool and never knows when he’s beaten. And that is what Chris Henry has helped him rediscover over the last 18 months. You only have to look at the way he bounced back from the manner of his exit at the World Champs last year to see how robust he is once more.

He enjoyed a fine run last summer beating Jordan Brown, Noppon Saengkham and Neil Robertson before coming up against Ronnie O’Sullivan in a mouthwatering semi-final. It was a match up of epic proportions.

Selby, remember, was the man who had denied the Rocket a third successive world title (and a sixth overall) in 2014, coming from 10-5 down to beat him in the final. An incredible achievement.

The late Willie Thorne was crying as Selby lifted the trophy and paid tribute to his Dad. A huge moment for all those in Leicester who had helped him along the way.

O’Sullivan’s revenge was served from 13-9 down last August. He started going for everything, some went in and it lit his fire. It’s a match Selby knows was his for the taking and yet somehow how he lost it in a decider.

Was there a hangover of regret or angst dragged into this season? Not a chance.

Selby won the European Masters beating Martin Gould in a decider and then thrashed O’Sullivan 9-3 in the Scottish Open final in December, successfully defending the title he had won twelve months earlier in Glasgow.

He hasn’t been quite as dominant post-Christmas and there have been a few heavy defeats here and there, but I think he’s once again in a headspace which makes him a very, very dangerous opponent for anyone at this year’s Betfred World Snooker Championship.

And that’s why he once again lines up as one of the favourites this year.