Rugby
News
Is the return of Michael Hooper and David Pocock a masterstroke or desperation?
John Davidson
19:01, 20 Sep 2019

It was the sensation of the 2015 World Cup, a tactic that took Australia all the way to the final.

The pairing of Michael Hooper and David Pocock in the Wallabies back-row, nicknamed ‘Pooper’ by the English press, was electric, entertaining and dynamic. The two smallish but speedy flankers – both six-foot-tall - dominated breakdowns, stole possession and super-charged the Aussie attack in England four years ago.

The selection of two similar openside flankers, alongside a bigger, taller number 6, allowed the Wallabies to play fast and with flair, taking apart slower opposition forward packs and slowing down their ball so their defence could be set. ‘Pooper’ almost took the green and gold all the way to a third World Cup crown.

Fast forward four years and coach Michael Cheika is going back to the future, bringing back ‘Pooper’ for Australia’s tournament opener against Fiji. But is this a masterstroke, or a sign of Cheika’s desperation?

The Wallabies arrive in Japan a shadow of the team that made the World Cup final in 2015. They are ranked sixth in the world and without their best player – fullback Israel Folau – because of his homophobic rants on social media.

2018 was Australia’s worst year in terms of results since 1958. They did not win two games in a row, slumping to nine defeats from 13 Tests. For several years they have been frustratingly inconsistent and Cheika has been lucky not to be sacked.

Player depth has been a big issue in Australian rugby union for some time. More and more players are leaving Super Rugby to play in France, Japan and Britain, making them unavailable for international selection.

The Wallabies brought back Matt Giteau and Drew Mitchell with devastating effect for the 2015 World Cup, and Cheika has done the same with James O’Connor and Nic White for this tournament. But still, the cupboard remains very bare.

So the coach has gone back to what he knows and put his faith in ‘Pooper’. But sadly the chance of it having the same impact as four years ago is small.

For starters, Pocock is arguably not the same player he was once was. The Zimbabwe-born forward was brilliant at the 2011 tournament and sensational in 2015. But he’s 31 now and injury-prone. He’s been playing elite professional rugby for 13 years, after debuting as an 18-year-old. 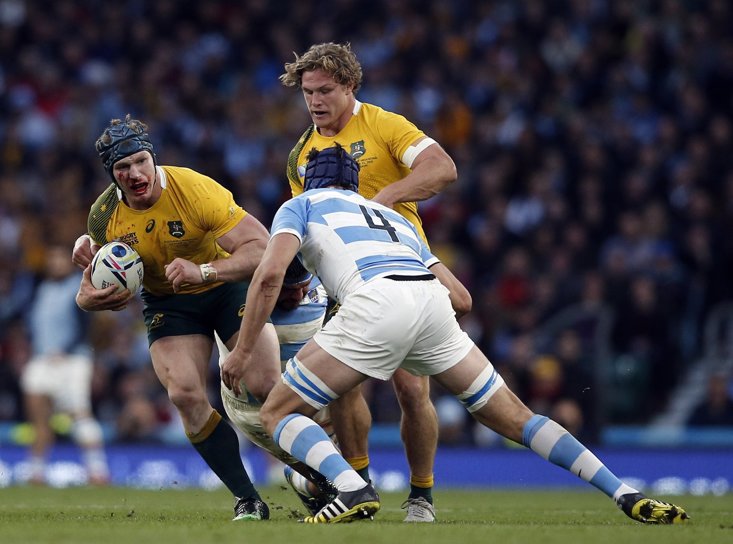 Pocock has put his body through the mill. He’s barely played this year because of a torn calf and has had two knee reconstructions in the past, as well as serious neck issues. He has already announced his retirement from international rugby after this World Cup. Elite rugby is a young man’s game.

Hooper is four years younger, but he also started his career as a teenager. He’s only six caps away from reaching 100 for Australia. Now 27, Hooper has not been in great form for the Waratahs or the Wallabies. He has captained the Wallabies through a terrible run of results. Like his coach, he has been under huge pressure.

For the Fiji match, Australia has dropped the tall and younger Lukhan Salakaia-Loto at 6, with Pocock to start in that position and Hooper to play at 7. The man-mountain Isi Naisarani will remain at number 8. Without Salakaia-Loto the lineout will be severely weakened.

“With the first game of the World Cup we went for a little bit more experience, just for this first one,” Cheika told reporters in Sapporo.

“They have done this before, the two boys playing together. There is obviously quite a big difference between Lukhan and David but they will achieve the same outcomes for us with their own special skill set.

“Our goal is to have a team that can lift games really quite easily. It can’t be dependent on any one player. We have got multiple options. We want as much ball as we can so if we get it off the ground then that’s a bonus.

“But these players are not selected just for their ability on the ground. There are a lot of other facets to their game, in terms of what they give the team on both attack and defence. We have worked on the possibility of this combination for the last couple of weeks so we think it will work well for us.”

Wallabies legend George Smith, one of the greatest flankers Australia has ever produced, would have stuck with the Hooper, Salakaia-Loto, Naisarani back-row that beat the All Blacks earlier this season.

“I think the combination is working well, I think persisting with that would be great,” Smith said.

“Pocock has done a lot to get back to where he is now, so I can see them working together on the field at the one time, and also Pocock coming off the bench.”

Time will tell if Cheika’s ploy comes off for Australia, or whether ‘Pooper’ was better left in the past.