The temperature has dropped, the nights are getting darker and the leaves are turning brown. You know what that means? Autumn? Don’t be silly, it means we are on the cusp of the latest FIFA game release. The 2022 edition of the EA Sports mega-franchise comes out on Friday, and The Sportsman has spent some time on the Playstation pitch with the game. Whether you’re someone who rifles through Ultimate Team packs to try and unearth an Icon, or prefer to take Salford City to Champions League glory in a 15-season career mode, here is everything you need to know about FIFA 22.

The FIFA games have drawn criticism for providing the same gameplay every year, with only the kits, players and teams changing. While this has never quite been true, often the mechanical adjustments are slight, and fail to address glaring issues with the previous release. Happily, this is not the case with FIFA 22. The primary complaint about FIFA 21 was the ridiculous scorelines. Goalkeepers were utter dunces regardless of their overall rating, while any defender without at least 80-rated pace was utterly useless. Once you had learned how to read the CPU’s moves it was quite easy to pump double figures past them, while online games would see wild 8-4 goal-fests occur regularly. FIFA aims to be a football simulation, and last year’s edition felt too lightweight and arcadey to effectively simulate football.

If you’re a fan of your Ultimate Team clashes ending in a rugby score, look away now, because you will have a much harder time scoring on FIFA 22. Slower defenders now have more solidity, with shot-blocking and interceptions much-improved. No more starting the quicker Eric Bailly ahead of Harry Maguire to exploit the game’s lop-sided mechanics. This makes goals harder to score, but much more fulfilling when they do come. Pace is still important, but not the be all and end all it once was. The upshot of the improved defence and goalkeepers, is that you will find yourself scoring a greater variety of goals than last year’s game. This makes for a more realistic football experience overall, when compared to last season’s high-octane pinball machine feel.

Another improved area is the physicality. One-on-one battles in attack and defence feel like more of a genuine struggle. In the past, trying to pull off a tackle has often felt like a lottery, with the game picking one player and making them unstoppable in that duel. Now each interaction feels more back-and-forth, and you are rewarded for timing your tackle correctly rather than just mashing buttons until you get the ball. This is particularly satisfying when play approaches your central midfielders, as their role feels more important than ever in breaking up play. Whether building a FUT side or a Career Mode team, a midfielder with good defending stats will serve you well. 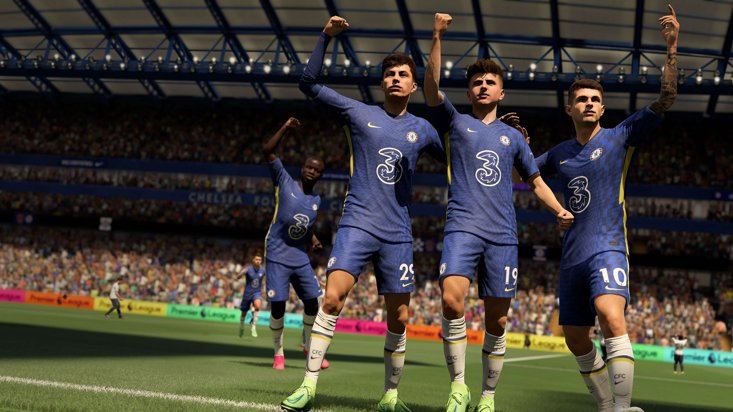 In terms of modes, Ultimate Team is back with some structural and aesthetic changes, but remains very similar at its core. Some of the competitions are structured a little differently, but largely it remains a loot-box driven, pay-to-win arm of FIFA. Volta has also been given some incremental improvements. Designed to appease fans who long for the days of the iconic FIFA Street franchise, Volta has never quite matched that title’s arcadey humour, and has struggled to find an audience as a result. There are some fun additions this year that skew a little more towards pick-up-and-play immediacy, such as a Dodgeball mode you can play with three other players. But ultimately, it still feels like a tacked-on nod to EA’s past, rather than a deep mode in which you’ll spend significant time.

The mode that boasts the biggest changes this year is Career Mode. The most entertaining is the ability to create your own club. Whether you want to bring your favourite non-league club into the world of FIFA, or just want to wind up your mate by making “Mike Is A Knob FC”, you now have complete freedom to build a team from scratch. For a first-time addition, you get some great customisation options. There is a stadium builder where you can make everything from a characterful lower-league ground to a modern enormo-dome. You are also in charge of making your own kits, setting your budget, picking your rivals and almost everything else that makes a football club tick. It really is superb fun, and adds a layer of immersion to the Career Mode experience.

Press conferences, post-match interviews and other interactions have been given a nice visual facelift, but still function like talking to a brick wall. As Watford manager, I was asked by a reporter what I made of a “disappointing” 2-2 draw with my “local rivals” Manchester United. You also still get asked how it feels to miss out on Europe in October, or to have relegated your opponents three games into the season. EA could learn a lot from Football Manager when it comes to these between-game interactions, because after a few years in the game they still feel like they were written by someone leaving their phone unlocked in their pocket and doing a cartwheel. 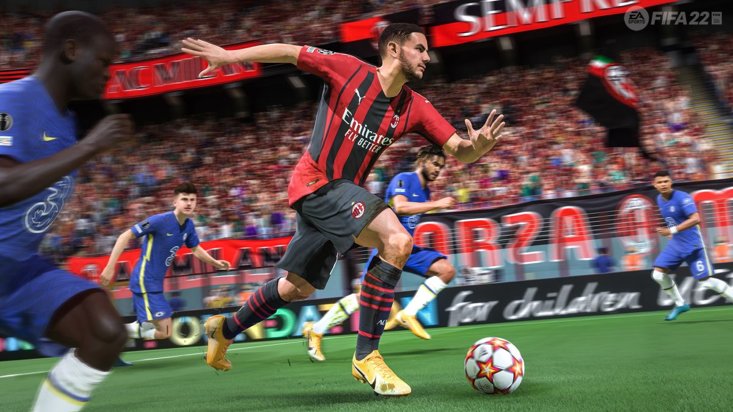 The devil is in the details, and FIFA 22 has gone heavy on the little touches this season. Alex Scott comes in to deliver some energetic and varied pitchside analysis, and she’s used brilliantly. In ten hours of play, I rarely heard her repeat the same speech twice. Derek Rae is joined by Stewart Robson this year on commentary. They do a serviceable job, but you do feel the return of Martin Tyler or Clive Tyldesley from previous games would add more gravitas to proceedings.

Another minor but fun detail EA have included is a deep well of statistics after each game. Appealing to a more tactically switched-on generation, you now get heatmaps for every player, Expected Goals numbers and metrics like Key Passes alongside the classicism of Shots and Shots On Target. This also adds a great excuse for losing multiplayer games. “How did you beat me?! I had 1.3 xG to your 0.9!”.

After spending ten hours with FIFA 22, the overriding impression is that EA Sports have done everything they can to simulate the game you watch on television or in the ground every weekend. Far removed from the ping-pong goal-bonanzas of years past, there are proper on-pitch battles to be had in this game. FUT and Volta could use a revamp, while Career Mode does the big things well and the little things less so. But crucially, this does not feel like FIFA 21 with updated squads. FIFA 22 is a game in its own right, and a very solid one.

x
Suggested Searches:
The Sportsman
Manchester United
Liverpool
Manchester City
Premier League
More
esports
Football Manager 2022: The Ultimate Management Sim Is Back
Dig out your favourite throwing water bottle and prepare to demand more, Football Manager 2022 is here. [ ... ]
esports
Forza Horizon 5: Perfecting The Formula In Mexico
It was 2012 when Microsoft and Playground Games released their attempt at an open-world racer, borrowing [ ... ]
esports
How To Spend Your First Day On Football Manager 2022
Call in sick, make a brew and unplug the phone (if you’re one of seven people in the world that [ ... ]
esports
Is eFootball Really The Worst Football Video Game Of All Time?
You’ve seen the memes, laughed at the glitches, and mourned its role in killing the iconic Pro [ ... ]
esports
Five Iconic FIFA Games: From The Dugout To The Streets
The wait is finally over, as FIFA 22 hits PC and consoles today. We have already test-driven the latest [ ... ]
esports
Everything We Know About Pro Evolution Soccer's Transformation...
The Pro Evolution Soccer era is coming to an end. Konami has dropped the name and announced [ ... ]
esports
Take Your New PlayStation 5 To The Next Level With These Essential...
It is finally here, but are you ready? After the now traditional seven year wait, the new generation [ ... ]
esports
Insane Gaming Chairs For The PS5 And Xbox Series X To Take You...
The fridge is stocked, the controllers are fully charged and that shiny widescreen TV is glowing. The [ ... ]
esports
From Custom Garages To Classic Tracks, Get Ready For Gran Turismo...
Finding the best racing game for you, is akin to finding the perfect beer. The one that hits the spot, [ ... ]
esports
From Arena Building To A Revamped Career Mode, The 5 Best New...
Autumn has arrived in the Northern Hemisphere, meaning that the ‘holiday’ season of gaming [ ... ]
esports
From Fatboy Slim To Franz Ferdinand, The Five Best FIFA Soundtracks...
FIFA 21 is out this week and that means a fresh new soundtrack. Sure, we love the football, the gameplay [ ... ]
esports
Norris Drives On At 'Not The Australian Grand Prix' To Help...
McLaren driver Lando Norris might not have yet reached a podium position or recorded a fastest lap in [ ... ]
esports
A $500K Prize Pot & The Chance To Show Pros How It’s Done -...
The final showdown of the Formula One Esports series takes place on Wednesday and the winner will [ ... ]