Golf
News
Rory McIlroy spoke out against the proposals but Bryson DeChambeau is open to them
Gary Maiden
15:40, 08 Jun 2021

The much-debated proposal of a Premier Golf League worth £250million is “entirely feasible” and could be in place by the beginning of 2023.

That is according to Andy Gardiner, chief executive of the newly formed PGL, who has outlined plans of an 18-tournament schedule targeting the top 48 male golfers on the planet.

Each tournament would come with a prize fund of $20million, with a whopping $4million to line the winner’s pockets. The player finishing in last position would also take home $150,000, with the finances involved proving too tempting to ignore for some of the world’s best players.

Not for Rory McIlroy, however, with the Northern Irishman labelling the proposals as a “money grab” similar to that of the recently debunked European Super League that united football fans on the continent in uproar.

Just last month, McIlroy spoke of his dislike for the idea, praising the PGA for how golf is currently managed.

"Go back to what happened with the European Super League in football. People can see it for what it is, which is a money grab, which is fine if what you're playing golf for is to make as much money as possible. Totally fine, then go and do that if that's what makes you happy.

"I'm playing this game to try to cement my place in history and my legacy and to win major championships and to win the biggest tournaments in the world." 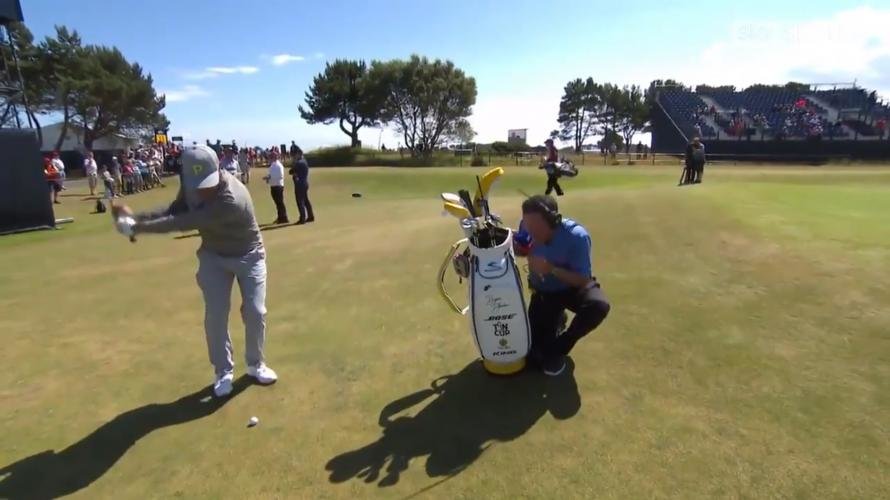 BRYSON DECHAMBEAU IS OPEN TO THE IDEA OF A REVAMP

Gardiner has admitted that talks have taken place with some of the leading players in the sport, with two topics at the forefront of discussions. The players that members of the PGL hierarchy spoke with asked if the tournament purses could be increased to the now approved $20million, and they also wanted reassurances that fears over bans and world ranking points had been addressed.

“I’ve listened to players talk about being banned,” Gardiner claimed. “They are not going to ban the players, I can assure them of that.”

Such positivity appears to have piqued the interest of some golf’s biggest stars, with Bryson DeChambeau hinting that he would be interested in joining the breakaway format.

The US Open champion stopped short of committing to the PGL, but his comments will concern the powers that be at the PGA.

"We just want to go play golf and I would say give the fans the best experience they could possibly have.

“Whatever is best for the players and for the fans is what I would support.”

The backlash from yet more plans for reform in one of the most loved sports around is unlikely to end anytime soon, but as is often the case in most walks of life – money talks. The reported $4million up for grabs for tournament winners in the PGL trumps the highest purse on the PGA tour by over $1million, with the winner of the Players Championship earning $2.7million.

While McIlroy’s stance is a romantic one, you’d have to imagine that those numbers will tempt most of the top players on the tour.

Recent reports have claimed that world number one Dustin Johnson and Olympic champions Justin Rose are two of several high profile players to have been offered around $30million to take part in the new format. If that is to be believed, then it surely won’t be long until this comes to a head.

There remain several hoops to jump through before the PGL dream becomes a reality, but with the backing of some of the biggest names in golf, don’t bet against a 2023 revamp of the sport.

x
Suggested Searches:
Manchester United
Liverpool
Manchester City
Marcus Rashford
Premier League
More
golf
Why The DP World Tour Will Help European Golf
As the PGA Tour came to a close before September’s Ryder Cup, the European Tour has entered its [ ... ]
golf
USA Complete Ryder Cup Annihilation As Cantlay And Scheffler...
The USA regained the Ryder Cup on Sunday, finishing off a convincing exhibition of matchplay golf by [ ... ]
golf
Team USA Dominate Day Two Of Ryder Cup Leaving Europe With A...
Team USA stretched their lead to 11-5 on day two of the Ryder Cup at Whistling Straits after another [ ... ]
golf
Ryder Cup Pairings 2021 Day One: Rahm And Garcia Eye Up Titanic...
The Ryder Cup pairings have delivered once again. Europe will start by sending out world number one [ ... ]
golf
Everything You Need To Know About The 2021 Ryder Cup At Whistling...
The 2021 edition of the Ryder Cup begins on Friday a whole year after its initially scheduled start [ ... ]
golf
Will Shane Lowry Make It? Europe's Ryder Cup Qualifying Race...
The Ryder Cup kicks off later this month at Whistling Straits and Europe’s men will be hoping [ ... ]
golf
Kids In America: Rookie Duo Maguire And Castren Fire Europe...
The old cliche that youth has no fear is often thrown about in sport, but we saw just how nerveless [ ... ]
golf
Cantlay, DeChambeau Or Rahm To Win? All You Need To Know On...
The PGA Tour heads to the home of some of golf’s most breathtaking courses, Atlanta, with East [ ... ]
golf
Everything You Need To Know Ahead Of The 2021 Solheim Cup
The 17th edition of the Solheim Cup, one of the most prestigious events in golf, gets underway this [ ... ]
golf
Kevin Kisner’s Wyndham Win Shows His Importance To Team USA...
Golf’s showpiece team event, the Ryder Cup, is just over a month away as Team Europe prepare to [ ... ]
golf
Golf's Sibling Superstars Minjee Lee And Min Woo Lee Are Taking...
On Sunday, Australian golfer Minjee Lee overturned a seven shot deficit to beat South Korea’s [ ... ]
golf
Unflappable Collin Morikawa Wins The Open Championship After...
American Collin Morikawa has won the Open Championship’s Claret Jug for the first time after a [ ... ]
golf
Oosthuizen Holds His Nerve To Take One-Stroke Lead Into Final...
Louis Oosthuizen proved once again that he should never be underestimated, as even with a subpar performance [ ... ]
golf
Louis Oosthuizen Makes Open Championship History As He Tightens...
Louis Oosthuizen tightened his grip on the Open Championship with another phenomenal round that saw [ ... ]
golf
Louis Oosthuizen Takes Clubhouse Lead On Day One Of The Open...
Day one of the British Open got off to an exciting start at Royal St George’s on Thursday, with [ ... ]
golf
Rahm, Koepka Or Spieth? Simon Dyson Analyses The Open Championship's...
The oldest golf tournament in the world gets underway tomorrow as the world’s finest players meet [ ... ]
golf
Rory McIlroy Looking To End Major Drought At The Open Championship
Rory McIlroy will be hoping to make some history at The Open this week as he looks to become the second [ ... ]
golf
Simon Dyson Predicts “Fantastic” Koepka Will Triumph At The...
Simon Dyson has predicted that Brooks Koepka will win the Open Championship at Royal St George’s.  [ ... ]
golf
Jon Rahm Becomes First Spanish Winner Of The US Open With Stunning...
Jon Rahm clinched his first major title and became the first Spaniard ever to win the US Open with a [ ... ]
golf
Can Brooks Koepka Make It Three Wins From Four At The US Open?
He may have dropped to number 10 in the world rankings, but Brooks Koepka’s showing in the opening [ ... ]
golf
PGA Championship: Phil Mickelson Makes History As Oldest Ever...
Phil Mickelson, at 50 years of age, has become the oldest ever winner of a major as he put in an incredible [ ... ]
golf
British Masters: Richard Bland Claims First European Tour Win...
Richard Bland has been playing golf on and off the European Tour since 2002 and has never won a tournament. [ ... ]
golf
British Trio Leading The Pack At Halfway In The Betfred Masters
We’ve reached the halfway stage of the Betfred British Masters and it’s been a ball-striking [ ... ]
golf
Everything You Need To Know About The 2021 Betfred British Masters
European Tour golf returns to the UK this week for the first time since October with the Betfred British [ ... ]
golf
There's Plenty Up For Grabs As The British Masters Returns To...
European Tour golf returns to the UK this week for the first time since October with the Betfred British [ ... ]
golf
Matsuyama Makes Masters History To Inspire New Generation Of...
Hideki Matsuyama has written his name into golf’s history books by becoming the first Asian player [ ... ]
golf
Masters Round-Up: Hideki Matsuyama Races Into Four-Shot Lead...
Hideki Matsuyama shot a 65 on Saturday to leapfrog Justin Rose heading into the final day of the Masters [ ... ]
golf
Justin Rose Leads The Masters As Defending Champion Dustin Johnson...
Heading into the biggest weekend in the entire golfing calendar, Englishman Justin Rose leads the way [ ... ]
golf
Masters Round-Up: Justin Rose Leads The Way As Tommy Fleetwood...
The opening day of the Masters was all about Justin Rose who opened up a four-shot lead after hitting [ ... ]
golf
2021 Masters Tee Times & Pairings - Thursday 9th April
The pairings for the opening two rounds of the Masters in Augusta have been drawn and now we know exactly [ ... ]