"I think that anyone that says they’re not scared of this kind of thing is either lying or coming up with pretence. I think for me I want to test myself."

Few could have predicted the 34-year-old's next test would be entering the Octagon as a heavyweight mixed martial artist, following his retirement from rugby in May. A surprise twist even for Haskell, who spent early August DJ-ing at Craig David’s Ibiza Pool Party.

But scratch beneath the surface and you'll find an ex-athlete searching for structure after calling time on his decorated 17-year rugby union career, the sport that has anchored his life since he was eight-years-old.

Haskell's venture into professional combat began on Northampton Saints RFC's treatment table last year, a place he became familiar with during his single season with the Premiership outfit. Persistent injuries and the sobering omission from Eddie Jones's World Cup plans forced the flanker to consider his future.

It's very hard retiring, they don’t prepare you for that. It doesn’t matter how successful you’ve been, you’re going from one sport to another - you’ve lost your identity.

“I’ve had a good summer DJ-ing, I’ve been working all over the place. I’ve been training, obviously on my own, but whenever it came to rugby, I got a bit melancholy and a bit down.”

“I wanted to find something that grounded me and then the opportunity came at the right time.”

Step forward Bellator, growing competitors to Dana White's UFC. Haskell had a spell commentating on a handful of British MMA shows, so when the call arrived, he assumed he'd be back behind the mic - not joining their roster.

"Oh brilliant, I’m finishing rugby and I’m interested in MMA, maybe he’s going to offer me some more work, and then they dropped the bombshell that they wanted me to fight.

"Once I stopped nervously laughing it kind of peaked my interest. I went back to my wife, she didn’t find it as funny, she obviously looked at me like I was a bit mad." 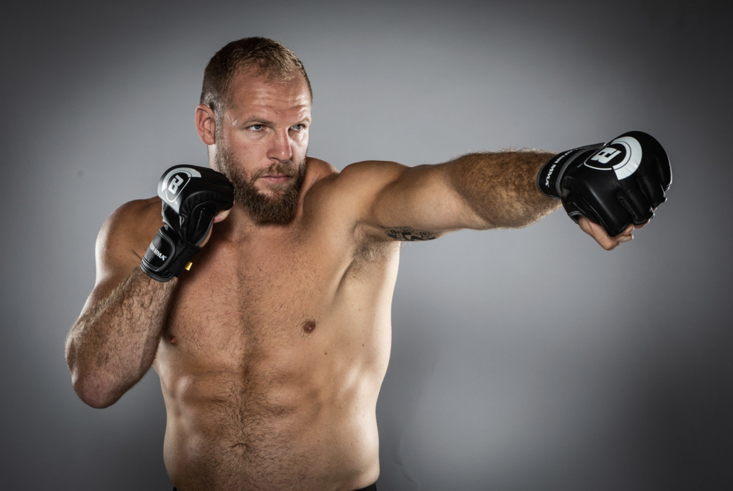 Subscribers to Haskell's social media channels or his excellent House of Rugby podcast will know he revels in the spotlight. He's charming, articulate and has developed a reputation as a TV personality, appearing on shows like A League of Their Own and Loose Women. The former British and Irish Lion even joked:

“I’m excited as I have never been an individual sportsman, I’ve always had a team press conference and now everybody is here to listen to me.”

Despite Haskell’s media-friendly persona, the 34-year-old is adamant his crossover to the cage is a serious project, repeatedly shaking off any suggestion of a PR stunt.

I think some people think it's like that scene out of Rocky III where he’s wearing gold gloves and he’s training, and it’s all showbiz and he gets absolutely filled in by Clubber Lang.

"That's not what I’m about. I’ll dedicate my life to this I want to make sure I'm in the best possible shape. Whatever happens at the end of it I’m going to put as much dedication into this as I did at rugby."

Haskell joins a select club of athletes who have switched sporting disciplines. Michael Jordan did it, swapping the NBA for baseball. His former Wasps RFC colleague Christian Wade is currently lighting up the NFL, scoring a sensational 65-yard touchdown last month. But one transition he won't be drawing inspiration from is Andrew "Freddie" Flintoff's boxing debut back in 2012.

“He’s obviously a hero at cricket, an unbelievable player, but I don’t want to look anything like he did in a boxing ring because it looked like he’d never taken a punch before and this is something that’s very serious for me, it’s a very different approach.”

The former England international, who was capped 77 times for his country, gave no timeline on when he expected to make his Bellator debut, insisting there’s a lot of considered work to be done.

"Every day is a school day but rest assured that my conditioning and my training is hard and intense. They haven’t stuck me in a cage and let people beat the crap out of me for an hour because that’s no good to anyone." 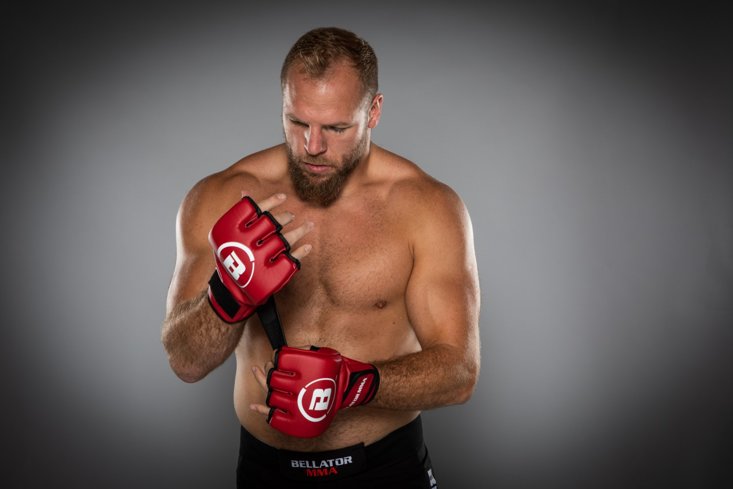 Haskell has had spells commentating on a handful of British MMA shows
x
Suggested Searches:
Manchester United
Liverpool
Manchester City
Marcus Rashford
Premier League
More
mma
Gilbert Burns Is Back And Looking To End Kamaru Usman's Unbeaten...
The UFC’s efforts to ensure events remain watchable throughout the Covid-19 pandemic are set to [ ... ]
mma
The Diet Plan McGregor Is Using To Ensure He’s Fighting Fit...
Conor McGregor returns to the Octagon this weekend when he takes on Dustin Poirier for the second time [ ... ]
mma
At £330,000, Ronda Rousey Is The Highest Earning MMA Fighter...
It’s been a long time coming and the only person more prepared than the fans is the man himself [ ... ]
mma
Talented, Tough And Charitable, Who Is Conor’s UFC 257 Opponent...
All eyes will be on Conor McGregor this weekend as he makes his return to the Octagon after another [ ... ]
mma
Michael Bisping’s Believe You Me Is The Perfect Pod To Satisfy...
With nearly 300 episodes to currently demolish, this is the podcast to satisfy your MMA munchies.  [ ... ]
mma
The UFC Needs Paige VanZant's Instagram Followers More Than...
It was over almost before it began. Eighteen months of waiting culminated in a dominant Amanda Ribas [ ... ]
mma
Sanitised Violence: When Cage Warriors Went Behind Closed Doors
Just before UK lockdown began, top European MMA promotion Cage Warriors took place in a hauntingly deserted [ ... ]
mma
''Best Shape I've Ever Seen Him'' - Conor McGregor Bringing...
The wait is almost over as Conor McGregor makes the final preparations for his return to the Octagon [ ... ]
mma
From The Greatest To The Fiercest, UFC 245 Promises A Night...
Let’s take stock for a second. 2019 has delivered some blistering moments. Who can forget Jorge [ ... ]
mma
Hungry And Focused, It's The New Improved Conor McGregor
Conor McGregor’s striking coach, Owen Roddy, insists his fighter “has that hunger again” [ ... ]
mma
''Focused'' Conor McGregor Announces His Octagon Return In 2020
Conor McGregor has come out of MMA retirement and announced his return to UFC at the start of next year. [ ... ]
mma
His Three Most Notorious Moments Inside The Octagon As Conor...
The former UFC featherweight and lightweight champion Conor McGregor has announced his retirement [ ... ]
mma
Tenshin Nasukawa Unleashes Amazing Capoeira Kick To Bounce Back...
The defeat to Floyd Mayweather in a farcical exhibition big-money boxing match on the last New [ ... ]
mma
#Bellator216: Michael Page Outpoints Paul Daley In Disappointing...
Michael ‘Venom’ Page outpointed long standing rival Paul Daley at the Mohegan Sun Arena [ ... ]
mma
#Bellator216: MVP And Daley Set For All-British Brawl In Connecticut
The biggest domestic UK MMA fight of all time goes down this Saturday evening… in Connecticut, [ ... ]
mma
Aaron Chalmers Suffers Shock Defeat In Hometown Bellator Newcastle
Bellator kicked off their European Series in Newcastle with a bang, with an incredible twelve finishes [ ... ]
mma
Aaron Chalmers Aims To Please As Bellator Heads To Newcastle
Aaron Chalmers bids to move to a perfect 5-0 record as a mixed martial artist in his hometown, as he [ ... ]
mma
Conor McGregor 'Clone' - German MMA Fighter Emulates His Hero...
If you are going to model yourself on UFC Legend Conor McGregor then you better be able to deliver the [ ... ]
mma
Conor Mcgregor And Khabib Nurmagomedov Slapped With Hefty Bans...
Conor Mcgregor And Khabib Nurmagomedov have both been banned for their parts in the mass brawl that [ ... ]
mma
Tenshin Nasukawa Responds To Conor McGregor Calling Him Out
The Japanese martial artist Tenshin Nasukawa has seemingly not allowed his confidence to be knocked [ ... ]
mma
Celtic Gladiator 22: Brendan Loughnane And Kane Mousah Headline...
European mixed martial arts show Celtic Gladiator return to Manchester on Friday night for the second [ ... ]
mma
Horrendous Scenes As MMA Fighter Dislocates His Knee Whilst...
Not what you want to see on a Sunday morning but here we go anyway. As we know, MMA is probably the [ ... ]
mma
Yair Rodriguez Stuns Chan Sung Jung With Last Second Knockout...
Yair Rodriguez produced a sickening elbow to the face of Chan Sung Jung in the last second of their [ ... ]
mma
Conor McGregor Inspires Dallas Cowboys To Victory And Claims...
Conor McGregor bounced back from his defeat to Khabib Nurmagomedov by watching the Dallas Cowboys beat [ ... ]
mma
Conor McGregor's Top 5 Knockouts
The return of Conor McGregor to the octagon after an extended… sabbatical will redraw the collective [ ... ]
mma
Korean Taekwondo Team Dazzle Audience With Action Packed Display
It’s over ladies and gentleman. If you’re thinking about taking up Taekwondo, or looking [ ... ]
mma
Ultimate Fighter 27 Finale Is Perfect Prelude To UFC 226!
The Ultimate Fighter Season 27 draws to a close as the perfect warm-up act for the hotly anticipated [ ... ]
mma
Aaron Chalmers' First Bellator Bout Sees The Ex-Geordie Shore...
On Friday night, MMA fighter Aaron Chalmers sensationally won his bout with Ash Griffiths by technical [ ... ]
mma
UFC Atlantic City: Kevin Lee Misses Weight, Main Event Still...
The octagon returns to Atlantic City, New Jersey for the first time in nearly four years with the promotion [ ... ]
mma
Jacare Meets Brunson In Main Event At UFC Charlotte
The octagon returns to Charlotte, North Carolina after almost an eight-year hiatus with a twelve-bout [ ... ]