Snooker
News
The cueman from Kettering has the self-belief to go far at 2021 Betfred World Snooker Championship
Rob Walker
10:00, 11 Apr 2021

Kyren Wilson has incredible maturity for a 29-year-old and I think he is one major title away from becoming a big star in snooker.

There is something of the everyman in his manner and humble determination and he’s clearly worked hard for what he’s got. The self-deprecating father of two from Kettering has certainly come a long way since playing part-time whilst working in a bar.

The talent was very much in evidence early on, yet accompanied by a somewhat laissez-faire approach to his sport. The wake-up call came after a couple of particularly successful weekends with a cue instead of empty glasses in his hands.

There was a dawning realisation that one weekend of snooker equated to several months of his bar job. Metaphorically and literally, the penny dropped and a serious player began to emerge.

He’s now a four-time ranking event winner who has made the final in two of the three Triple Crown events, finishing runner-up to Mark Allen at the Masters in 2018 and then of course coming through that almost unbelievable semi-final against Anthony McGill last August, before finishing runner up to Ronnie O’Sullivan in his maiden Betfred World Championship final.

I have always thought you can tell a lot about a sportsman or woman by the friends and family with whom they surround themselves and in that regard the Wilsons (plural) are class.

Last summer backstage at the Crucible felt surreal to say the least, with none of the usual array of agents and friends in attendance. However, Kyren was in a bubble with his brother Taylor, who regularly sat (socially distanced of course) in what we call the Green Room - the dining area for officials and the media. You could not wish to meet a nicer, more polite relative on the circuit. Taylor was living every ball of his brother’s extraordinary run to the sport's most important match and we were always glad to see him in our break area.

Yet every time he was in there, he always asked if there were enough spare seats for him to watch in the communal room.

It was fascinating to see the tension and elation in his face as he shared honest thoughts and insight on what makes his brother tick. After the semi-final he told us he just couldn’t bear to watch the final frame decider and had walked six miles around the centre of Sheffield, occasionally popping back to check the score as and when his nerves would allow. 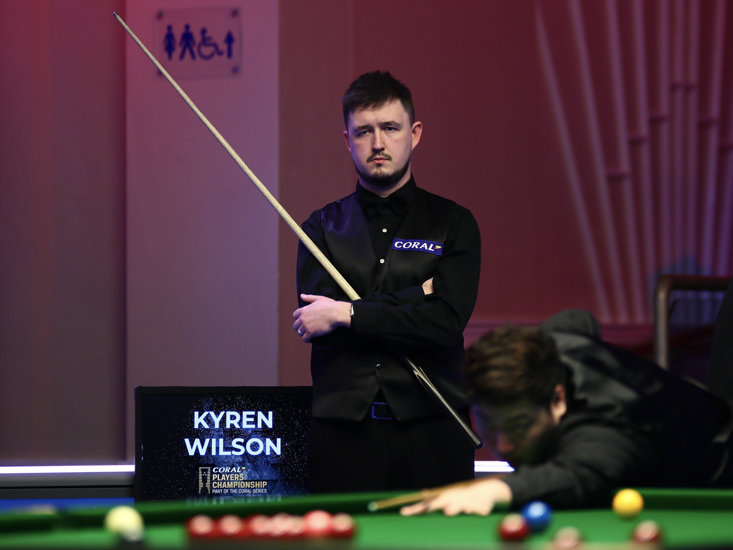 It was a frame for the ages and one in which the strokes of fortune reduced his passionate brother to tears of relief, guilt and unadulterated joy. We may well not see another frame like it for quite some time.

Back home and away from the table, it’s clear Taylor is a big part of Kyren’s everyday life. When the world number six is playing at major events, his brother puts in a lot of time with his nephews Finlay and Bailey, who made their TV debuts last summer, coming out to sit in their dad’s chair for the post World final interview. They almost stole the show!

It’s clear that having constant back-up and assistance from his wife Sophie allows Kyren to fully focus when away immersed in the day job. The ultimate team effort.

The journey has been an interesting one for Kyren. When he beat Judd Trump in a decider to secure the Shanghai Masters title in 2015, we knew he had the temperament for the big occasion and he backed that up beating Peter Ebdon to the Paul Hunter classic three years later, followed by victory over Dave Gilbert for the German Masters title in 2019.

Alongside those three ranking titles, he was also getting to grips with the cauldron of the Crucible. After losing to Ricky Walden on his debut in 2014, he reached his first quarter-final two years later, beating Joe Perry and Allen, before succumbing to eventual champion Mark Selby in the last 8.

The following two years he was halted in the quarters and then the semis by one of his heroes, John Higgins, before once again bowing out in the last eight stage to Gilbert in 2019.

Beating world number one Trump in the quarters, once again, showed he’s not afraid of the big-hitters on the big stage and no one who watched will ever forget that 61 minute epic semi-final decider against McGill.

9-7 was as close as he got to O’Sullivan towards the end of the opening day of the final, but all those experiences will stand him in good stead for this, his seventh year of attempting to lift the title.

So what about this season? Well he enjoyed the perfect start to the current campaign beating Trump to win the Championship League (which was a ranking title back in September) and he has followed it up with six ranking quarter-finals and a run to the semis at the Players Championships, where he was unlucky enough to come up against a Higgins in the form in his life.

His warm-up for the climax of the season was completed in style as he won the spring non-ranking Championship league title at the start of April. It’s been a very consistent eight months on the circuit for Wilson.

He’s now had a taste of the big time in the Triple Crown events and will want to get back there again in Sheffield in successive seasons. Despite occasional wobbles whilst in commanding positions, like losing to O’Sullivan in December’s Grand Prix from 3-1 up, by and large his self-belief is pretty strong and he’ll fancy it again in 2021.

No doubt his brother will be there and very much hoping his next walk around Sheffield isn’t quite so fraught with nerves!