8.3 seconds, 28 years ago. That’s all it took for part-time footballer, part-time computer science student Davide Gualtieri to score San Marino’s most famous goal against England, a goal that remains the second fastest in World Cup history. England failed to qualify for the 1994 tournament and Gualtieri’s goal was the definitive one that ended Graham Taylor’s time in charge of the Three Lions, as he resigned just six days later.

The Hand of God, Iceland in 2016 and the entire managerial reign of Steve McClaren. It’s fair to say England have not been short of embarrassing moments during their long and not-so-illustrious history, but this one topped the lot. But forget the negativity, this isn’t about England, or even Taylor’s woes, this is the story of Sammarinese legend Davide Gualtieri.

Let’s go back to 17 November 1993 and set the scene. In the early nineties, San Marino had a population of just 25,209, roughly the same as Fleetwood has today, and had been an official member of Fifa for just three years when they served the Three Lions their most embarrassing moment. The landlocked country to this day is still the worst international team in the world according to the Fifa rankings, so John Motson’s immortal words from that day have haunted England fans for 27 years...“England needing to win by a seven-goal margin and hope Poland can do them a favour in Poznan against Holland. [Whistle blows] I’m sure you’re aware now of what is at stake. Bacciocchi number nine picks the ball up straight away and San Marino launch the first attack… Oh, and a mistake by Stuart Pearce, and San Marino have scored! I don’t believe this!” 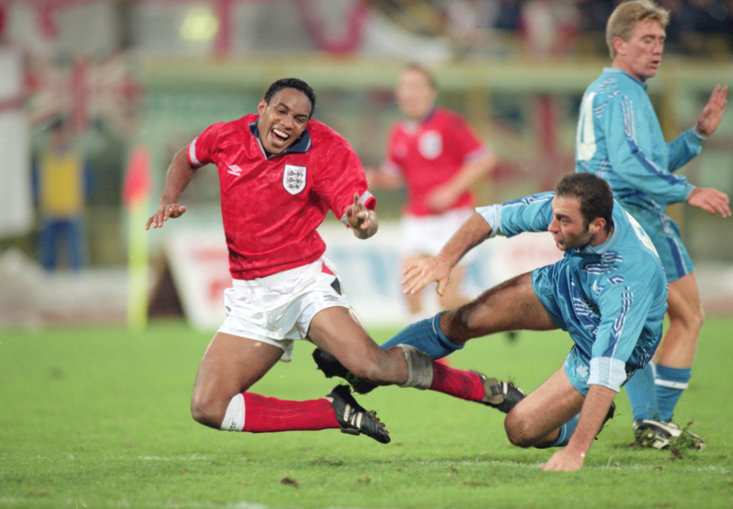 Motson may have had the viewers, but on Capital Gold radio, Jonathan Pearce was providing some hilarious commentary magic of his own. “Welcome to Bologna on Capital Gold for San Marino versus England with Tennent's Pilsner, brewed with Czechoslovakian yeast for that extra Pilsner taste and... ENGLAND ARE ONE DOWN!!”

For Davide Gualtieri, scorer of San Marino’s most famous goal, this would be the peak of his otherwise inconspicuous footballing career, yet he’d never have to pay for a Pilsner in his hometown again. He played for just three clubs Juvenes, Pennarossa and Tre Penne, all in his homeland, across his career and just nine times for his country. However, pouncing on Psycho’s mistake has not only been seen 500,000 times on YouTube, but given him legendary status in the micro-state.

Pearce, despite his error and England’s anger after the game, was kind enough to give Gualtieri his shirt after the game, a piece of sporting memorabilia that now takes pride of place in the 49-year-old’s home. These days he may have lost his head of hair, but he still regales anybody and everybody about that famous night, always with the same heartwarming grin on his face. 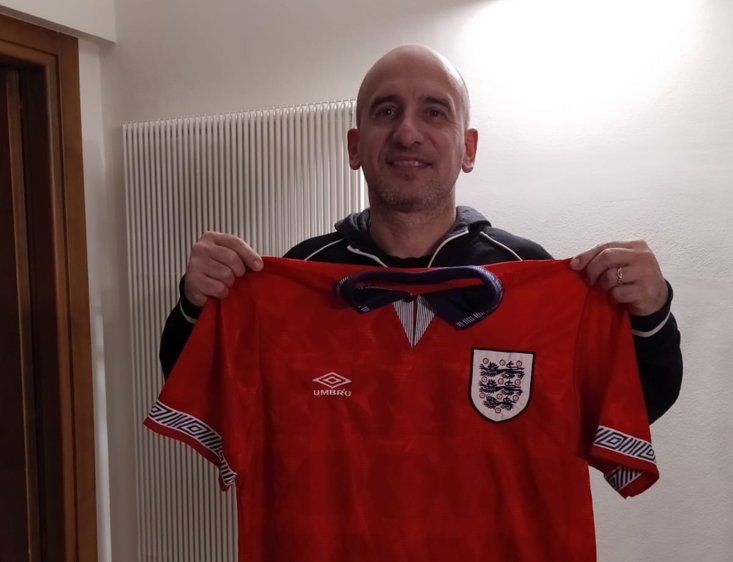 “They called him ‘Psycho’, but I wasn’t scared. I just ran past him to score my goal,” he told The Times. Three years after that famous finish, Gualtieri began a venture of his own, starting up a computer business after years of being a salesman. Now perched on the top of a mountain, both physically and metaphorically, his business provides a stable internet connection to journalists for San Marino’s games. If only they could relive his goal all over again.

He called time on his footballing career at the ripe old age of 38, finishing his club career 10 years after his final international appearance, as a peaceful life in the mountains with wife Caterina beckoned. It hasn’t been all quiet though, Gualtieri and his family have unsurprisingly received a lot of love from Scotland fans, who took it upon themselves to treat his brother to a meal and drinks when he was there on holiday! 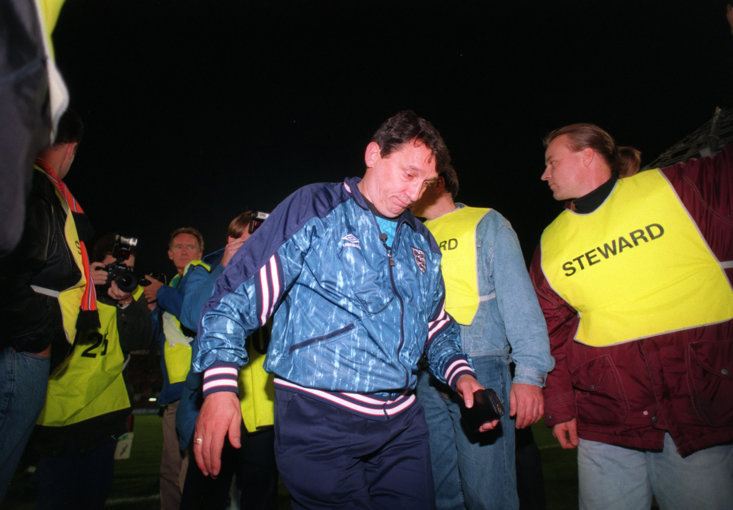 GRAHAM TAYLOR RESIGNED SOON AFTER THE LOSS TO SAN MARINO

However, 2009 wasn’t the last we saw of him on a football pitch as he featured in ITV’s Harry Heroes this year, putting together a team of retired San Marino players to take on the ex-England legends.

David Seaman finally put that ghost to rest as he counted aloud through the first eight seconds of the game, celebrating loudly when his clean sheet was intact after the time had elapsed, instead of picking the ball out of his net as he had done nearly three decades ago. Gualtieri beamed throughout the game, despite a 5-3 defeat, delighted to revel once more in his 15 (or should that be 8.3) seconds of fame.

San Marino have still never won a competitive game, even all these years on, and goals are hard to come by. In the meantime, San Marino’s finest moment belongs to a humble computer store owner named Davide Gualtieri.

x
Suggested Searches:
The Sportsman
Manchester United
Liverpool
Manchester City
Premier League
More
boxing
On This Day: Sugar Ray Leonard Edges Past Marvin Hagler In Titanic...
"How do you like it, how do you like it?!"   The commentator's words rang out [ ... ]
football
''I Believe In Fairies'' - The Life And Times Of The Extraordinary...
Brian Clough wasn’t just one of the most quotable managers in English football’s long history, [ ... ]
football
Rangnick Right About Fourth Being United's Ceiling, But He Shouldn't...
"We want to finish fourth in the league, this is the highest possible achievement we can get.” [ ... ]
boxing
Angelo Dundee: Three Masterpieces From Boxing’s Greatest Trainer
Perhaps the greatest cornerman of all-time, Angelo Dundee guided the careers of sixteen world champions [ ... ]
boxing
The Day Ali Talked A Suicidal Man Down Off The Ledge Of A Beverly...
Wilshire Boulevard in Los Angeles cuts right through the heart of Beverly Hills. One particularly famous [ ... ]
boxing
From Broadway To Hostage Negotiation: Ali's Best Moments Outside...
Muhammad Ali transcended the world of not just boxing, but sport as a whole, like no other athlete who [ ... ]
football
Zaha's Double, 1989 And 'Poogate': Inside The Brighton v Crystal...
This article first appeared in The Sportsman on 27th September, 2021 Crystal Palace against Brighton [ ... ]
boxing
George Foreman’s Faith: How The 45-Year-Old Heavyweight Stunned...
George Foreman swept through the heavyweight division like a hurricane, obliterating nearly all who [ ... ]
boxing
Last Round, Folks: When Boxing’s Invisible Champion Was Blitzed...
History has not been kind to Floyd Patterson. Countless world champions have drifted through the annals [ ... ]
boxing
The Life And Times Of Heavyweight Legend Jack Johnson
What do Alan Turing, The Doors frontman Jim Morrison and the comedian Lenny Bruce have in common? These [ ... ]
boxing
Pacquiao: From Poverty-Stricken School Drop-Out To Eight-Weight...
"I knew without a doubt I would become a fighter - I knew that the underdog can, and often does, [ ... ]
sports
Hulk Hogan, Mr. T And Madison Square Garden's Five Greatest...
It’s named after the fourth President of the USA. It’s where George Harrison had his concert [ ... ]
snooker
VR Mishaps, Pig Farms And American Hustles: When Ronnie O’Sullivan...
As it's snooker legend Ronnie O'Sullivan's 46th birthday, we thought we'd take [ ... ]
sports
Meet The Man Who Climbed Everest, Partied For A Week, Then Climbed...
This article first in The Sportsman on 08/12/19 There’s nothing normal about Nirmal Purja. After [ ... ]
motorsport
Frank Williams - A Formula One Pioneer Whose Team Went To The...
For much of the 1980s and 90s, Williams Racing was the biggest name in Formula One and Frank Williams [ ... ]
football
How Cantona Made Manchester United The Dominant Force Of The...
It started with Leeds United making an enquiry about signing Denis Irwin and finished with Manchester [ ... ]
boxing
River Wilson Bent Talks Coventry City, Newborn Baby And British...
“Imagine if Coventry City made it to the Premier League and I brought the British title home for [ ... ]
football
Neil Warnock - The Record Breaking Football Lover That Just...
When the whistle blows at Kenilworth Road for Luton Town's home match against Middlesbrough on Tuesday [ ... ]
football
Leicester's City Progress Is Proof That Vichai's Vision Has...
On this day three years ago Leicester City lost their influential owner, Vichai Srivaddhanaprabha in [ ... ]
rugby-league
The Birth Of The Grand Final: Rugby League's Biggest Of Big...
“I’ve said it for years… the last game of the season should be the most important,” [ ... ]
football
Celebrating Arsenal's Invincibles With The Stats That Tell The...
There’s Sergio Agüero winning it in Fergie time. Liverpool finally ending 30 years of hurt [ ... ]
football
From Balotelli To Bullard, The Premier League's Greatest Ever...
It's been a full decade since Mario Balotelli lifted his shirt in Manchester City's 6-1 [ ... ]
motorsport
On This Day: Rookie Lewis Hamilton Loses F1 Title In Controversial...
On this day in 2007, we witnessed perhaps the greatest end to a Formula One season we have ever seen. [ ... ]
motorsport
How Lauda's 140mph Crash Marked The End Of The Age Of Innocence...
There are few worse moments to lose control than when driving at 140 miles per hour. The events on just [ ... ]
football
FA Cup Round-Up: Brilliant Buxton Make First Round As Dorking...
It was a night when Dorking Wanderers saw their dreams dashed by Hayes and Yeading, Stratford made some [ ... ]
us-sports
Celebrating Jim Brown - The NFL Movie Giant Who OJ Robbed Of...
Before OJ there was the OG. The Original Gangster. In fact he was front and centre of an action-packed [ ... ]
football
Sheriff Tiraspol - The Champions League Club With Two Faces
On the surface, it has been the underdog story of the Champions League so far. Never before has a club [ ... ]
boxing
From Taming Tyson To Bashing Buster, Evander Holyfield’s Best...
Today marks the 59th birthday of one of the best boxers to lace up a pair of gloves in the modern [ ... ]
football
Fernando Torres - Atletico's Local Hero, Liverpool's Tainted...
‘This means more’ is Liverpool’s oft-derided motto, but when they face Atletico Madrid [ ... ]
football
On This Day In 1987: The Rangers v Celtic Shame Game
Whatever the circumstances when Rangers face their Glasgow neighbours Celtic the [ ... ]