Boxing
Features
The middleweight can win the English title this weekend in his beloved home city
Simon Lillicrap
11:00, 11 Nov 2021

“As I said, the dream turns into a plan.”

River Wilson Bent has big ambitions for the future heading into Saturday’s English middleweight title fight against Tyler Denny in his home city. Currently 10-0 in his professional career and the Midlands Area champion, he is now looking to secure a national title in front of not only his home crowd, but a national audience as the card will be shown live on Channel 5.

‘River the boxer’ as he is known locally, is immensely proud of the city that he is from and is now looking to be part of the City of Culture’s sporting rise - as his boyhood football club are currently 4th in the Championship.

“It is just the city that I've grown up in, I'm always backing the city you grow up in,” he tells The Sportsman, having been introduced on the CBS pitch at half-time in the Sky Blues’ recent 3-2 win over Bristol City.

“In football terms, the first team I ever went to watch was Cov back at Highfield Road. The first game I went to watch they played Torquay. I can't remember what year but I was young. My mum used to work for Coventry Telegraph, so we used to get in the boxes and stuff. I used to love it, sitting in the box with loads of food, loads of drink, and just watching football.”

A 4-1 home win against Torquay in 2004 was enough to make Wilson Bent fall in love with the Sky Blues, and now his side are back home and enjoying a resurgence under Mark Robins - even if boxing’s rising star isn’t getting to as many matches as he would like.

“I go when I can - at the minute I haven't had a weekend off!” he laughs. “It has been non-stop sparring and running but when I do get free time, of course, I am down there. If we can just keep it up man, come on Cov, you do your side and I will do my side. Coming home was the best thing that happened to us and look at the support now - it is crazy. We have got everything going for us - it is just a rising city now. It's a beautiful city.” 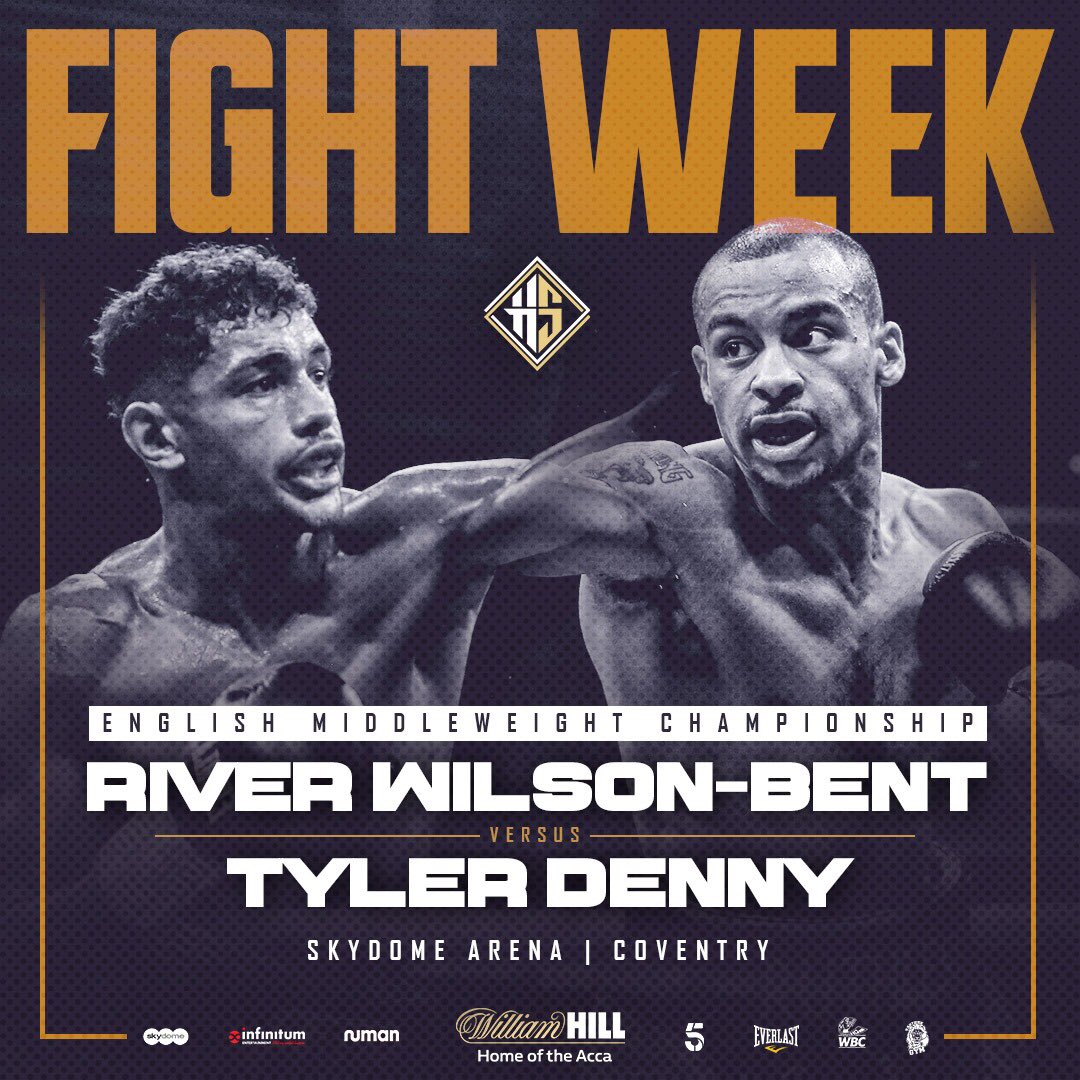 The 27-year-old looked remarkably fresh faced when we caught up with him, given that 11 weeks ago he became a father for the first time, and his child has completely changed his outlook on life.

“My first baby - she's a little star,” he says, unable to keep the smile from his face.

“She has changed my mindset, everything I do is for her. Even the little things, things that were important a few months ago mean nothing to me now. It is all about making sure she has a good life and good holidays, she has a roof over her head, that is all that matters to me now. It is that drive that has given me that extra bit of motivation to get out of bed - I already had motivation but she has given me a whole lot more.”

However, on fight week, the job in hand takes precedence, as he stays away from home to make sure his sleep is not disturbed.

It’s been a perfect start for Wilson Bent in the professional ranks, as he beat the unbeaten George Farrell for the Midlands Area title and has now completed his very first camp, having previously been forced to balance his full-time job as a roofer with the sport he loves.

“Getting the opportunity to box under Hennessy Sports and doing it how I did it, knocking the lad out in three rounds, opened all doors for me. Then Channel 5 got hold of me, offered me a contract, so I signed with them.

“Money wise and stuff, it is brilliant, it gives me more time back and I can focus on boxing. This is my very first camp that I have had off work because I do work full-time, but my boss came up to me and said ‘look, have seven weeks off, and prepare for this fight.’

“I'm like a different beast because normally I wake up at half four, go for a run, eat my breakfast, go to work for half five, come back from work, sometimes not even eat and go straight to the gym. Come home, eat, sleep and repeat. So it is hard. But you know what, hard days make hard people. But I'm living a nice life at the minute. I get a bit of a lie-in, 7am is when the baby normally wakes up, then the day starts and I crack on with the training.”

This professional lifestyle should see a more explosive fighter take to the ring on Saturday night, on the undercard of Shakan Pitters vs Reece Cartwright for the WBC International title. Wilson Bent will take on a tricky southpaw in Denny (13-2-2), and being from Birmingham, this has the makings of a feisty local encounter - but the home favourite is hoping to learn from some of the best.

“I'm watching Roy Jones Jr and just watching how he boxed southpaws and how he gets his feet round to box a southpaw,” he says. “Just watching how he manipulates people and uses his jab well against a southpaw. It is a lot of revision at the minute, watching these old school fighters and seeing how they did it.”

As for how the fight with Denny will pan out, Wilson Bent believes it will be another stoppage, with five KO’s to his name already. “It is going to be a cagey start, as soon as I start flicking my jab out and get in control of him, that is it. There is going to be a big knockout, I am going to get him out of there definitely. Strength wise, I feel I am the bigger and stronger man and I just feel like I will have too much in the tank. Big win and English champion is coming up.”

This is a city on the rise. After years of sporting misery, the City of Culture 2021 has a football club knocking on the door of the Premier League and a boxer who has major titles in his sights. No longer a Ghost Town, something special is happening in Coventry.

x
Suggested Searches:
The Sportsman
Manchester United
Liverpool
Manchester City
Premier League
More
boxing
On This Day: Sugar Ray Leonard Edges Past Marvin Hagler In Titanic...
"How do you like it, how do you like it?!"   The commentator's words rang out [ ... ]
football
''I Believe In Fairies'' - The Life And Times Of The Extraordinary...
Brian Clough wasn’t just one of the most quotable managers in English football’s long history, [ ... ]
football
Rangnick Right About Fourth Being United's Ceiling, But He Shouldn't...
"We want to finish fourth in the league, this is the highest possible achievement we can get.” [ ... ]
boxing
Angelo Dundee: Three Masterpieces From Boxing’s Greatest Trainer
Perhaps the greatest cornerman of all-time, Angelo Dundee guided the careers of sixteen world champions [ ... ]
boxing
The Day Ali Talked A Suicidal Man Down Off The Ledge Of A Beverly...
Wilshire Boulevard in Los Angeles cuts right through the heart of Beverly Hills. One particularly famous [ ... ]
boxing
From Broadway To Hostage Negotiation: Ali's Best Moments Outside...
Muhammad Ali transcended the world of not just boxing, but sport as a whole, like no other athlete who [ ... ]
football
Zaha's Double, 1989 And 'Poogate': Inside The Brighton v Crystal...
This article first appeared in The Sportsman on 27th September, 2021 Crystal Palace against Brighton [ ... ]
boxing
George Foreman’s Faith: How The 45-Year-Old Heavyweight Stunned...
George Foreman swept through the heavyweight division like a hurricane, obliterating nearly all who [ ... ]
boxing
Last Round, Folks: When Boxing’s Invisible Champion Was Blitzed...
History has not been kind to Floyd Patterson. Countless world champions have drifted through the annals [ ... ]
boxing
The Life And Times Of Heavyweight Legend Jack Johnson
What do Alan Turing, The Doors frontman Jim Morrison and the comedian Lenny Bruce have in common? These [ ... ]
boxing
Pacquiao: From Poverty-Stricken School Drop-Out To Eight-Weight...
"I knew without a doubt I would become a fighter - I knew that the underdog can, and often does, [ ... ]
sports
Hulk Hogan, Mr. T And Madison Square Garden's Five Greatest...
It’s named after the fourth President of the USA. It’s where George Harrison had his concert [ ... ]
snooker
VR Mishaps, Pig Farms And American Hustles: When Ronnie O’Sullivan...
As it's snooker legend Ronnie O'Sullivan's 46th birthday, we thought we'd take [ ... ]
sports
Meet The Man Who Climbed Everest, Partied For A Week, Then Climbed...
This article first in The Sportsman on 08/12/19 There’s nothing normal about Nirmal Purja. After [ ... ]
motorsport
Frank Williams - A Formula One Pioneer Whose Team Went To The...
For much of the 1980s and 90s, Williams Racing was the biggest name in Formula One and Frank Williams [ ... ]
football
How Cantona Made Manchester United The Dominant Force Of The...
It started with Leeds United making an enquiry about signing Denis Irwin and finished with Manchester [ ... ]
football
Almost 30 Years Since THAT Goal, Davide Gualtieri Is Still San...
8.3 seconds, 28 years ago. That’s all it took for part-time footballer, part-time computer [ ... ]
football
Neil Warnock - The Record Breaking Football Lover That Just...
When the whistle blows at Kenilworth Road for Luton Town's home match against Middlesbrough on Tuesday [ ... ]
football
Leicester's City Progress Is Proof That Vichai's Vision Has...
On this day three years ago Leicester City lost their influential owner, Vichai Srivaddhanaprabha in [ ... ]
rugby-league
The Birth Of The Grand Final: Rugby League's Biggest Of Big...
“I’ve said it for years… the last game of the season should be the most important,” [ ... ]
football
Celebrating Arsenal's Invincibles With The Stats That Tell The...
There’s Sergio Agüero winning it in Fergie time. Liverpool finally ending 30 years of hurt [ ... ]
football
From Balotelli To Bullard, The Premier League's Greatest Ever...
It's been a full decade since Mario Balotelli lifted his shirt in Manchester City's 6-1 [ ... ]
motorsport
On This Day: Rookie Lewis Hamilton Loses F1 Title In Controversial...
On this day in 2007, we witnessed perhaps the greatest end to a Formula One season we have ever seen. [ ... ]
motorsport
How Lauda's 140mph Crash Marked The End Of The Age Of Innocence...
There are few worse moments to lose control than when driving at 140 miles per hour. The events on just [ ... ]
football
FA Cup Round-Up: Brilliant Buxton Make First Round As Dorking...
It was a night when Dorking Wanderers saw their dreams dashed by Hayes and Yeading, Stratford made some [ ... ]
us-sports
Celebrating Jim Brown - The NFL Movie Giant Who OJ Robbed Of...
Before OJ there was the OG. The Original Gangster. In fact he was front and centre of an action-packed [ ... ]
football
Sheriff Tiraspol - The Champions League Club With Two Faces
On the surface, it has been the underdog story of the Champions League so far. Never before has a club [ ... ]
boxing
From Taming Tyson To Bashing Buster, Evander Holyfield’s Best...
Today marks the 59th birthday of one of the best boxers to lace up a pair of gloves in the modern [ ... ]
football
Fernando Torres - Atletico's Local Hero, Liverpool's Tainted...
‘This means more’ is Liverpool’s oft-derided motto, but when they face Atletico Madrid [ ... ]
football
On This Day In 1987: The Rangers v Celtic Shame Game
Whatever the circumstances when Rangers face their Glasgow neighbours Celtic the [ ... ]