Boxing
Features
On the tenth anniversary of the legendary trainer's passing, we take a look t the man who sharpened the skills of Ali and Leonard.
Joey Mills
21:05, 01 Feb 2022

Perhaps the greatest cornerman of all-time, Angelo Dundee guided the careers of sixteen world champions including Muhammad Ali and Sugar Ray Leonard. Universally respected as an honourable man in an often dishonourable sport, Dundee was a beloved fight figure until his sad death in 2012. On the tenth anniversary of his passing, we honour Angelo Dundee by looking at three of the trainer’s greatest fights.

Buying The Greatest Some Time

In 1963, Muhammad Ali was a rising heavyweight prospect named Cassius Clay. A rising prospect Henry Cooper had just put on the floor in front of a packed Wembley Stadium. The fight wasn’t supposed to go this way. Clay was on the verge of a shot at World Heavyweight Champion Sonny Liston, and was expected to defeat the Brit with energy to spare.

After a strong Clay start, a dynamite left hook from Cooper dumped the Louisville man onto the canvas with two seconds remaining in the round. The future Ali had to be helped back to his corner, and his senses were so scrambled that he attempted to stand up from his stool while the cutman was still working on him. Sensing the fight slipping away from his man, there are a number of Angelo Dundee tales that supposedly unfolded in the following minute and a half.

Some observers claim Dundee poured ice down Clay’s shorts, others allege the trainer used illegal smelling salts to revive his charge. One theory that is borne out by the footage is that Dundee drew the referee’s attention to loose threading in Clay’s glove, delaying the restart and buying precious seconds of rest for the wobbled Cassius.

A refreshed Clay would secure a TKO victory in the very next round, when the fight was waved off with the Englishman carrying a grisly eye injury caused by the sharp punching of the young contender. In his next fight, Clay would secure his first world championship by defeating Liston. He would meet Cooper again three years later, and stop him once again on cuts. 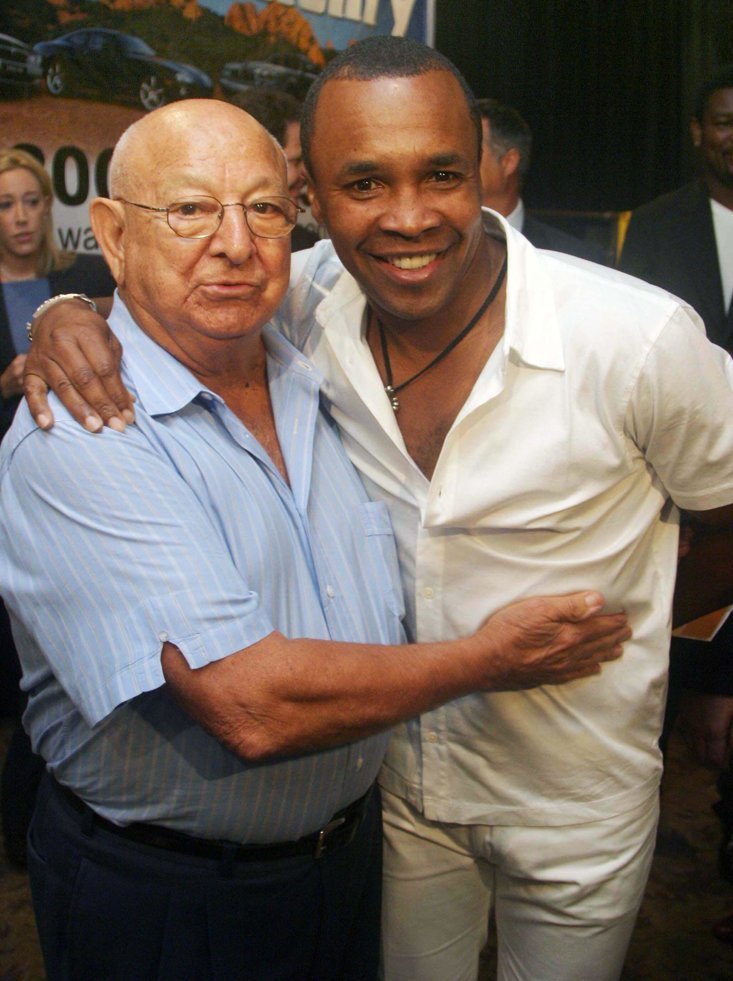 From “Blowing It” To Blowing Hearns Away

Sometimes the role of a trainer goes beyond the tactical. When Sugar Ray Leonard fought Thomas ‘Hitman’ Hearns in their clash for the unified welterweight title, the game-plan he’d worked on with Dundee was not bearing fruit. The rangy Hearns was outboxing Leonard, who could not rely on his speed to outfox the bigger man. Of his own accord, Leonard pivoted to the role of puncher, and attempted to knock the legendary Kronk Gym product out.

The strategy worked initially, Leonard rocked his opponent with a fine left hook. But Hearns turned the tide from round 9 onwards. In the interval between the 12th and 13th rounds, Dundee showed why he is a master motivator. Delivering a furious pep talk to his charge, Angelo famously told Ray “You're blowing it now, son! You're blowing it!”. Coming out with a renewed vigour, Leonard dropped the ‘Hitman’ twice in the 13th round, sending him spiraling through the ropes. He closed the show in the following stanza, with the referee waving the fight off as Sugar Ray fired in combinations with Hearns pinned to the ropes. 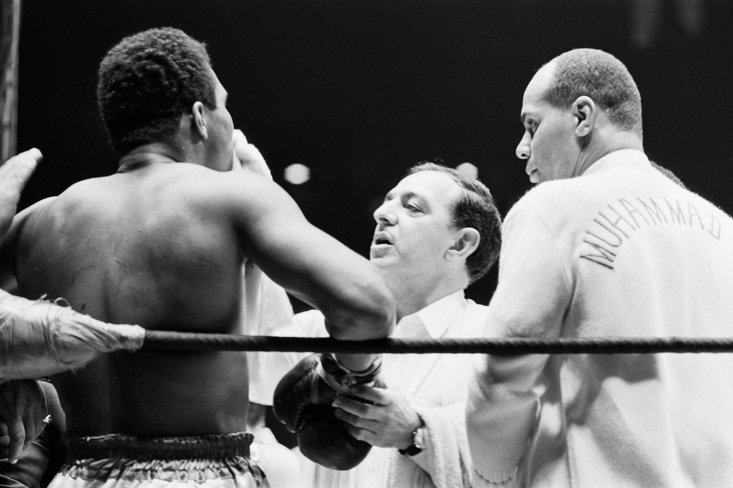 Angelo Dundee had arguably been the architect behind the lowest point in George Foreman’s career. Ali’s cornerman for the famed ‘Rumble In The Jungle’, the veteran trainer had coached his man to a knockout win over Foreman in Zaire. He would also play a crucial role in ‘Big’ George’s greatest triumph.

When Foreman made his comeback a decade removed from the Ali fight, he became a different fighter. Much of this was down to Dundee, who introduced his former foe to the cross-arm defence he would carry throughout his second career. This was a key adjustment that led to a successful second coming for the former heavyweight champion.

Foreman’s comeback was initially viewed with scepticism, but after pushing Evander Holyfield to the limit in a 1991 war with Dundee running the corner, fans and analysts began to take notice. None of them could have expected the next trick from the fighter and trainer duo.

Aged 45, Foreman stepped into the ring with the WBA/IBF World Heavyweight Champion Michael Moorer, wearing the same red shorts he had worn when Dundee and Ali planned his downfall in the Kinshasa heat. He would enjoy far happier memories of them from now on. Behind on the cards, but having absorbed many of Moorer’s damaging blows on his arms thanks to Dundee’s defensive coaching, Foreman scored a 10th round knockout to become the oldest-ever heavyweight king. Dundee may have helped strip Foreman of that title nearly two decades before, but he was instrumental in reuniting the affable preacher with his beloved belts.

x
Suggested Searches:
The Sportsman
Manchester United
Liverpool
Manchester City
Premier League
More
boxing
On This Day: Sugar Ray Leonard Edges Past Marvin Hagler In Titanic...
"How do you like it, how do you like it?!"   The commentator's words rang out [ ... ]
football
''I Believe In Fairies'' - The Life And Times Of The Extraordinary...
Brian Clough wasn’t just one of the most quotable managers in English football’s long history, [ ... ]
football
Rangnick Right About Fourth Being United's Ceiling, But He Shouldn't...
"We want to finish fourth in the league, this is the highest possible achievement we can get.” [ ... ]
boxing
The Day Ali Talked A Suicidal Man Down Off The Ledge Of A Beverly...
Wilshire Boulevard in Los Angeles cuts right through the heart of Beverly Hills. One particularly famous [ ... ]
boxing
From Broadway To Hostage Negotiation: Ali's Best Moments Outside...
Muhammad Ali transcended the world of not just boxing, but sport as a whole, like no other athlete who [ ... ]
football
Zaha's Double, 1989 And 'Poogate': Inside The Brighton v Crystal...
This article first appeared in The Sportsman on 27th September, 2021 Crystal Palace against Brighton [ ... ]
boxing
George Foreman’s Faith: How The 45-Year-Old Heavyweight Stunned...
George Foreman swept through the heavyweight division like a hurricane, obliterating nearly all who [ ... ]
boxing
Last Round, Folks: When Boxing’s Invisible Champion Was Blitzed...
History has not been kind to Floyd Patterson. Countless world champions have drifted through the annals [ ... ]
boxing
The Life And Times Of Heavyweight Legend Jack Johnson
What do Alan Turing, The Doors frontman Jim Morrison and the comedian Lenny Bruce have in common? These [ ... ]
boxing
Pacquiao: From Poverty-Stricken School Drop-Out To Eight-Weight...
"I knew without a doubt I would become a fighter - I knew that the underdog can, and often does, [ ... ]
sports
Hulk Hogan, Mr. T And Madison Square Garden's Five Greatest...
It’s named after the fourth President of the USA. It’s where George Harrison had his concert [ ... ]
snooker
VR Mishaps, Pig Farms And American Hustles: When Ronnie O’Sullivan...
As it's snooker legend Ronnie O'Sullivan's 46th birthday, we thought we'd take [ ... ]
sports
Meet The Man Who Climbed Everest, Partied For A Week, Then Climbed...
This article first in The Sportsman on 08/12/19 There’s nothing normal about Nirmal Purja. After [ ... ]
motorsport
Frank Williams - A Formula One Pioneer Whose Team Went To The...
For much of the 1980s and 90s, Williams Racing was the biggest name in Formula One and Frank Williams [ ... ]
football
How Cantona Made Manchester United The Dominant Force Of The...
It started with Leeds United making an enquiry about signing Denis Irwin and finished with Manchester [ ... ]
football
Almost 30 Years Since THAT Goal, Davide Gualtieri Is Still San...
8.3 seconds, 28 years ago. That’s all it took for part-time footballer, part-time computer [ ... ]
boxing
River Wilson Bent Talks Coventry City, Newborn Baby And British...
“Imagine if Coventry City made it to the Premier League and I brought the British title home for [ ... ]
football
Neil Warnock - The Record Breaking Football Lover That Just...
When the whistle blows at Kenilworth Road for Luton Town's home match against Middlesbrough on Tuesday [ ... ]
football
Leicester's City Progress Is Proof That Vichai's Vision Has...
On this day three years ago Leicester City lost their influential owner, Vichai Srivaddhanaprabha in [ ... ]
rugby-league
The Birth Of The Grand Final: Rugby League's Biggest Of Big...
“I’ve said it for years… the last game of the season should be the most important,” [ ... ]
football
Celebrating Arsenal's Invincibles With The Stats That Tell The...
There’s Sergio Agüero winning it in Fergie time. Liverpool finally ending 30 years of hurt [ ... ]
football
From Balotelli To Bullard, The Premier League's Greatest Ever...
It's been a full decade since Mario Balotelli lifted his shirt in Manchester City's 6-1 [ ... ]
motorsport
On This Day: Rookie Lewis Hamilton Loses F1 Title In Controversial...
On this day in 2007, we witnessed perhaps the greatest end to a Formula One season we have ever seen. [ ... ]
motorsport
How Lauda's 140mph Crash Marked The End Of The Age Of Innocence...
There are few worse moments to lose control than when driving at 140 miles per hour. The events on just [ ... ]
football
FA Cup Round-Up: Brilliant Buxton Make First Round As Dorking...
It was a night when Dorking Wanderers saw their dreams dashed by Hayes and Yeading, Stratford made some [ ... ]
us-sports
Celebrating Jim Brown - The NFL Movie Giant Who OJ Robbed Of...
Before OJ there was the OG. The Original Gangster. In fact he was front and centre of an action-packed [ ... ]
football
Sheriff Tiraspol - The Champions League Club With Two Faces
On the surface, it has been the underdog story of the Champions League so far. Never before has a club [ ... ]
boxing
From Taming Tyson To Bashing Buster, Evander Holyfield’s Best...
Today marks the 59th birthday of one of the best boxers to lace up a pair of gloves in the modern [ ... ]
football
Fernando Torres - Atletico's Local Hero, Liverpool's Tainted...
‘This means more’ is Liverpool’s oft-derided motto, but when they face Atletico Madrid [ ... ]
football
On This Day In 1987: The Rangers v Celtic Shame Game
Whatever the circumstances when Rangers face their Glasgow neighbours Celtic the [ ... ]